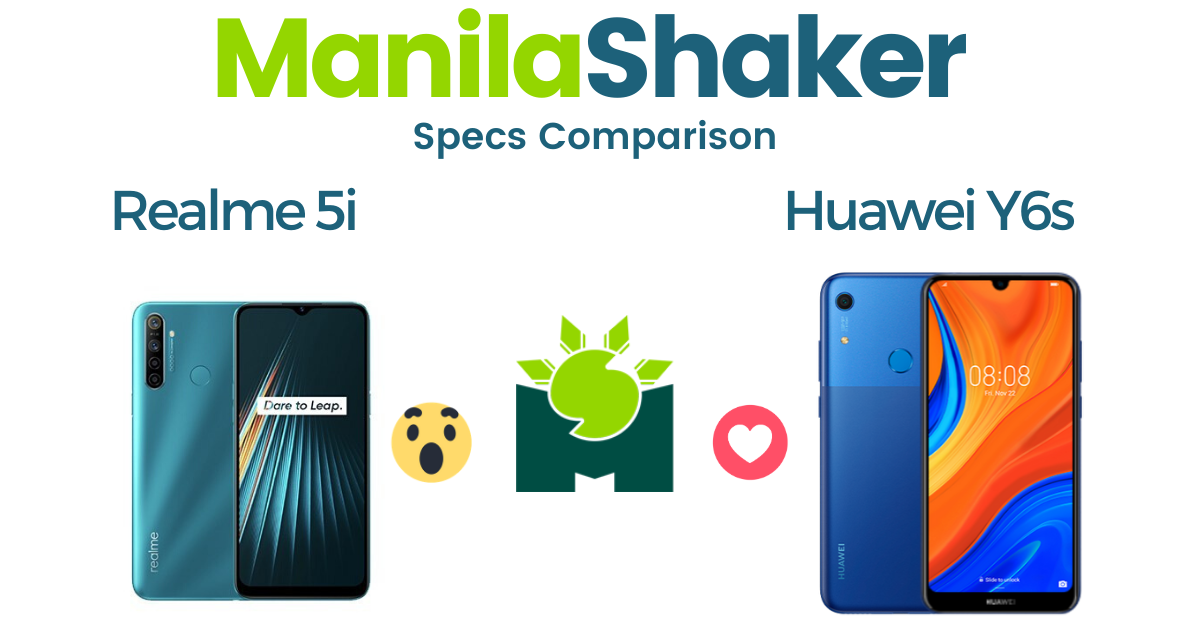 While Realme 5i is selling like hotcakes for P6,990 only, Huawei Y6s is gaining traction since its release. Coincidentally, both phones cost the same. When you’re looking for a budget phone, every feature will matter. That said, which of the two should you get?

Realme 5i and Huawei Y6s Differences

Realme 5i and Huawei Y6s Similarities

Which is a better buy between the Realme 5i and Huawei Y6s?

While there’s a stark difference in design between the two budget phones, it only has one aim — to resist fingerprint smudges. Realme 5i features an all-grainy shell while Huawei Y6s uses a matte-like finish for the significant portion of the back. Build-wise, Realme has the advantage thanks to splash resistance and Corning Gorilla Glass 3+. If you want a one-hand friendly phone, the latter is the way to go at 6.09″ diagonal screen size. But if you want taller and immersive screen, the former offers 6.52″. Regardless, both are using IPS LCD with 720p+ resolution.

READ: 5 Reasons Why Realme 5i Is the Best Budget Phone Right Now

Even with the higher boost clock speed, Snapdragon 655 is still more efficient and more powerful than Helio P35. This is based on synthetic benchmarks online, with Qualcomm chipset being at least 20 percent faster. While both running on Android 9 Pie with complete Google services, only Realme 5i has scheduled Android 10 support. Rarely we see budget phones to support major software updates, so this is a major advantage over the competition.

It seems like nothing can beat the quad-camera setup of Realme 5i under this price range. Aside from the main sensor, you have ultrawide, macro, and depth at your arsenal. Additionally, you can record up to 4K @ 30fps video and with the option to use electronic image stabilization. Where Huawei Y6s ties the comparison is the selfie camera, however, video recording is capped at 1080p @ 30fps only.

Both devices are using a south-firing speaker. There’s also an audio jack should you wish for better audio quality. While we can’t vouch for Huawei Y6s, we did review Realme 5i and it provided sound quality that’s not tinny with a bit of depth.

Realme 5i destroys Huawei Y6s in the battery department. With the hefty 5000mAh battery, it can last up to two days whether it’s casual or heavy use. Don’t expect much from Huawei’s device since it only comes with 3020mAh. Both, however, use micro USB for 10W charging.

At P6,990, Realme 5i is the clear winner. It just offers more features that are up to today’s standards. Huawei Y6s is only vouching for its unique design, while the rest is something not writing home about.