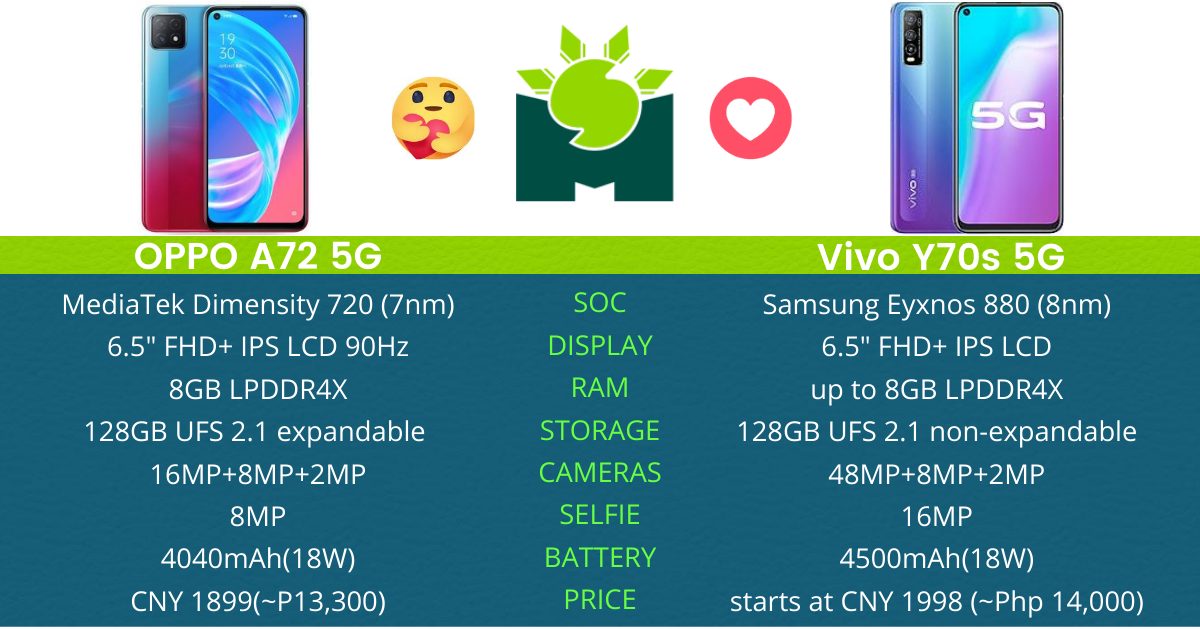 There’s no question 5G is the future of connected mobile devices. Though the technology has yet to become a standard in the mainstream market, that doesn’t mean OEMs can’t release affordable 5G phones already. Enter OPPO A72 and Vivo Y70s — two of the most surprising devices right now with 5G capability. Why? Because both are priced under $300USD (~P15,000).

OPPO A72 and Vivo Y70s Similarities and Differences

Which is the better buy between the OPPO A72 and Vivo Y70s?

If not for the camera module, anyone could easily mistake one over the other. It’s hard to ignore the similarities between the two when it comes to their design. Starting with the A72, it has an asymmetrical two-tone finish that shines towards the red and blue spectrums. Situated squarely on the top-left end is the tri-camera module. According to reports, OPPO’s budget 5G phone is only 7.9mm thick and 175g light. Considering the battery and modem inside, it’s one of the lightweight phones out there.

As for the Y70s, the two-tone finish reminds us of Realme C11 (in a good way). But make no mistake, that doesn’t make the phone look cheap. We actually like the subtle gradient switching from purple to light blue. In addition to that, the vertical camera strip appeals to us more than the square type. Though we need to mention that the phone is on the hefty side, clocking in at 8.55mm and 190g.

Given the price points of the two 5G phones, it’s hard to see both OEMs opting for glass. With that in mind, it’s safe to assume that these phones are of plastic, including the frame. Nevertheless, we have the Y70s as the better-looking one, with the A72 best for ergonomic.

Don’t be fooled by the similarly-looking displays, as one is clearly better than the other (at least, for most of the user experience). Both are sporting IPS LCD FHD+ panel at 6.53″ in size, with pinhole cutouts on the top-left corner. Where the A72 takes the cake is the taller aspect ratio, 20:9, and the inclusion of a 90Hz refresh rate. What this means is that the display of OPPO, in this comparison, has more space for vertical scrolling and operates faster. Unless you only want a longer-lasting phone, there’s no reason not to pick the screen of A72 over the Y70s.

READ: Reno 4 With SD 765G, 65W Charging to Arrive in the Philippines in August

Dimensity 720 vs Exynos 880 – Now, this is a fascinating chipset comparison. Both are yet to be widely available on the market and are relatively new. Given the lack of official data and benchmarks on the internet, it’s hard to gauge how each chipset performs. What we do know, however, are their specifications.

We’re looking at two performance cores and six efficient cores for the octa-core CPU. The clock speeds can reach up to 2GHz, with 1.8GHz for the efficient cores of Exynos 880. You probably won’t feel the advantage of slightly higher clock speed, given the slim negligible discrepancy. However, GPU is a bit of a different story. OPPO A72’s Dimensity 720 uses ARM Mali G57 MC3, which is a bit worse than Vivo Y70s’ ARM Mali-G76 MC5. As to how significant the contrast is, we’re not sure. Regardless, we’re happy to see UFS 2.1 already at this price point. And by the way, Y70s lacks a dedicated slot for microSD. However, it does come with liquid-cooling technology.

As for other specs, both devices are using side-mounted fingerprint scanner and running on Android 10. If we have to pick between the two, we have to go with the Dimensity 720. Samsung has been receiving flak lately, due to its inefficient chipsets. But that’s just our opinion — we love to know your thoughts.

While quad-camera is clearly the trend now, this is the first time we’re comparing triple-cameras. Yep! The A70 may look like it has four cameras on the back, but the other is actually just the LED flash. As seen from the table above, you get the standard combo of wide, ultrawide, and depth setup. In fact, both are capable of up to 4K@30fps video recording with EIS in tow. However, the big 48MP sensor on the Y70s means sharper photos and videos than A72. The same story shared with the 16MP versus 8MP selfie camera.

Fortunately, OPPO and Vivo haven’t omitted the headphone jacks in favor of 5G. But, the Y70s may sound better in comparison due to the stereo speakers setup and aptX HD codec for audio over Bluetooth.

Perhaps the main reason why A72 is slim is because of the 4040mAh battery. It’s not conservative, but it surely isn’t incredibly massive by today’s standards. But when you have 4500mAh on the Y50s, it’s hard not to compare. Nevertheless, both support 18W fast charging via USB-C.

Now for their prices:

Even with the lowest configuration, Vivo Y70s still can’t undercut OPPO A72. While we were not surprised by their prices, we surely were by the way the A72 got priced, considering it offers 90Hz. Is the fast refresh rate a big deal? No. But, it’s a hot trend in 2020 and will be for the next couple of years.