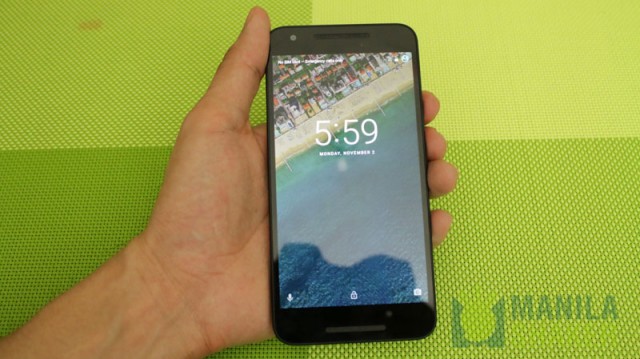 It’s Nexus time of the year again where Google and other OEMs team up to build and release smartphones powered by the latest Android OS version. This time LG and Huawei made the 2015 Nexus line, mainly the Nexus 5X and Nexus 6P, respectively.

The LG Nexus 5X is the lower high-end Android 6.0 Marshmallow device compared to the premium Nexus 6P of Huawei. Nexus 5X features large 5.2-inch 1080p protected by Gorilla Glass 3. Behind is Snapdragon 808 hexa-core, chip similar to the 7-month old LG G4, paired with 2GB of RAM 16GB or 32GB non-expandable storage. The main shooter on the back is 12.3MP sensor backed by laser focus. Let’s take a look on the rest of the specs and key features down below in our unboxing, hands-on and first impressions.

The Nexus 5x comes in a white retail box with the basic accessories and manuals. Unfortunately, you wouldn’t find any stereo headset in the box. But what you will be getting is a fast charging 3.0A wall adapter in Type-C USB. Both ends of the cable is male Type-C USB ver. 2.0 which will definitely need you to purchase an adapter or USB to Type-C cable in order to connect it to your PC/laptop with no Type-C USB to transfer files, songs and movies.

The Nexus 5X is equipped with non-removable 2700mAh battery while having a nano SIM slot support, which is accessible in the right side using a sim ejector key.

Built from polycarbonate or plastic, the Nexus 5X feels smooth and light in hands. Edges are flat while corners are curved, providing an easy grip. Thickness is relatively average for a 5.2-inch device but its weight is really the advantage here which is not too heavy, nor too light.

The 12MP main camera sits on the top part area of the back while the fingerprint sensor is located below it. For several days of use already, so far, the fingerprint sensor on Nexus 5X is one of the fastest and most accurate we’ve encountered. Area is wide enough to snugly fit any size of fingers, and most of the time, the sensor never failed to read my finger despite being sweaty.

Unlike on Note 5, iPhone 6s and Xperia Z5, the sensor of 5X is passive, so you would’t need to press the lock key to wake it up, similar to OnePlus 2.

Images shot from the Nexus 5X’s main shooter have decent detail preservation and have good exposure and color rendition. Night shots are comparable to flagships phones we’ve tested, though it lacks manual controls as to most Nexus smartphones.

In terms of software and experience, the Nexus 5X is one of the first line of Android smartphones to run on the latest 6.0 Marshmallow OS. The stock Android 6.0 is cleaner and flatter compared to 5.1 Lollipop. There very few visual changes on 6.0 though most of the new features are found under the hood.

Such changes include the App launcher, which removes the looping horizontal windows and now focuses on just one vertical window. The top four frequent apps appear on the top. Another change is on System UI tuner or the customization to Quick Settings. You can’t arrange and add/remove shortcut from the top quick menu unless you enable the System UI tuner by long pressing the gear.

Android 6.0 experience on LG Nexus 5X is buttery smooth. The lags or stuttering are no more to be found, though in a very rare situation, you’s still experience one but it is fine hiccups. The overall browsing speed, launching and multitasking tasks on Nexus 5X is comparable to the speed of the latest iPhone 6s. It is really nice to see Google’s Android catching up to the iOS’ experience in terms of speed.

Be sure to follow us in our FB, TW, IG and subscribe to our YouTube channel for the latest updates about the LG Nexus 5X. We will be releasing our comparison (G4, V10, etc) and review for the Nexus 5X very soon.