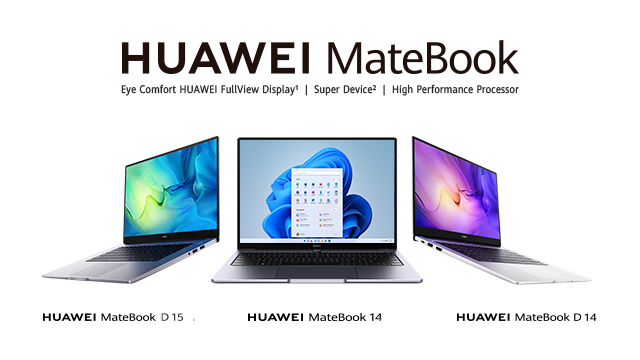 First is the Huawei MateBook 14, which sports a 14-inch IPS display with a pixel resolution of 2160 x 1440, 185 PPI, 90 percent screen-to-body ratio, and a 3:2 aspect ratio. Its display also has an Eye Comfort Mode to minimize blue light emissions and DC dimming to eliminate flickers to prevent eye strain.

Under the hood, it comes with the Intel Core i7-G1165G7 processor, paired with Iris Xe Graphics, 16GB of RAM, and 512GB of SSD storage. It also packs a 56Wh LiPo battery with Intelligent Power Saving technology allowing the device to enjoy up to 11 hours of battery life. To keep the laptop cool and stable, it has an upgraded Shark fin internal dissipation system.

Powering them is the 10nm 11th-Gen Intel Core i5 processor, paired with 8GB of RAM (D 14), 16GB of RAM (D 15), and 512GB of NVMe PCIe SSD storage. There is also a Performance Mode toggle that enables the CPU to use its full power.

Both laptops come with an all-metal build that is available in Space Grey and Mystic Silver colors, a fingerprint scanner on the power button, a retractable camera, supercharging, Windows 11 OS, and Huawei Super Device.