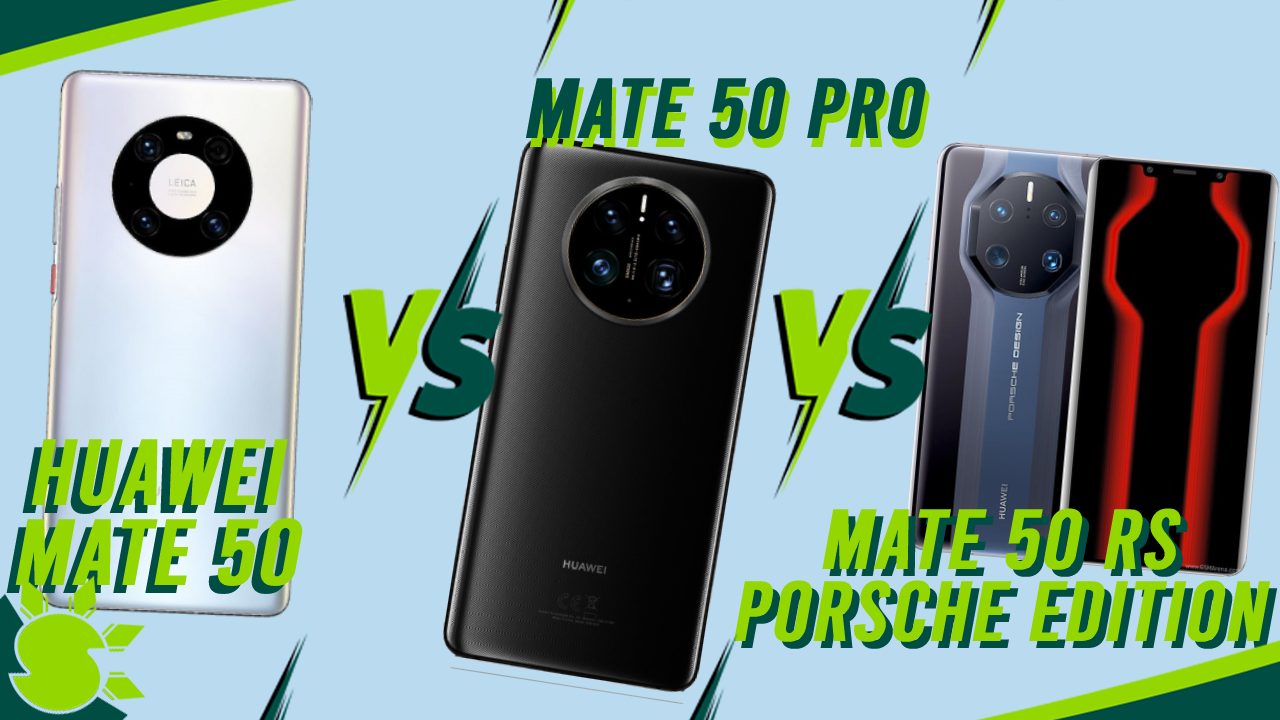 Huawei’s entry into the smartphone industry may have slowed significantly, but that doesn’t imply the company’s objectives in this highly competitive sector have vanished. After a two-year sabbatical, the Mate series returns with two new devices: the Huawei Mate 50 and the Huawei Mate 50 Pro. This comes at an important moment since the US government is proposing to ease limitations on the corporation imposed by the existing trade prohibition.

The Mate 50 series has two primary models: the Mate 50 basic and the Mate 50 Pro, as well as a special Porsche edition, like in the past. The three versions have essentially comparable specifications, but the Porsche Look stands out because of its luxury design, greater RAM, and superior cameras. We’ve opted to take a deeper look at the Huawei Mate 50, Huawei Mate 50 Pro, and Huawei Mate 50 RS Porsche Edition due to the minimal changes between the three new models in the range.

The back designs of the Mate 50 and Pro models are extremely similar. A circular camera housing with four camera sensors arranged in a 2 x 2 pattern is included. Technically, there are only three sensors on the rear, and the fourth is a dummy sensor inserted for symmetry. However, the back design is nice and clean overall, and with many color options on both models, such as Black, Silver, Purple, and Orange, the new Mate 50 series delivers a luxury impression.

The Porsche Edition, like its predecessor, the Mate 40 RS Porsche Edition, comes with an octagonal camera module. Given its resemblance to prior generation models, a simple peek at the back would betray its identity as a Porsche edition. However, the number of cameras has been reduced and is now restricted to three.

The Mate 50 has a single punch hole camera on the front, however, the Mate 50 Pro and RS Porsche edition has a more typical broad notch with a complicated collection of sensors for 3D facial recognition.

When the dimensions are compared, there are some slight discrepancies between the three. The Mate 50 is significantly shorter, measuring 161.5 x 76.1 x 8 mm, whereas the Mate 50 Pro is thicker but slightly narrower. The Mate 50 RS Porsche edition, on the other hand, has a similar body profile as the Pro version but is somewhat thicker at 9.9mm.

Surprisingly, all three versions feature the same screen size and resolution – 6.7 inches with 1224 x 2700 resolution. The main difference is the refresh rate, with the Mate 50 receiving a 90Hz display while the Pro and Porsche versions receive 120Hz panels. Instead of typical Corning Gorilla glass panels, all three phones have the company’s self-developed Kunlun glass protection.

Another significant variation is the style of display, with the Mate 50 receiving a standard flat display while the Pro and Porsche edition devices have a curved display. That’s also why the screen-to-body ratio on the Pro and Porsche variants is greater.

The Snapdragon 8+ Gen1 processor, with an octa-core architecture clocked at 3.2GHz, powers all three phones. As a result, you’ll never run out of power with these three models. However, like other recent flagships, the snapdragon processor will be a 4G-only processor, which means that none of the three models will enable 5G, which is unfortunate.

In terms of software, all three phones use the EMUI 13 international version outside of China and HarmonyOS 3.0 in China.

The Huawei Mate 50 has a triple camera arrangement that includes a 50MP Sony IMX766 sensor, a 13MP Sony IMX688 ultra-wide angle lens, and a 12MP telephoto zoom lens with up to 5x optical zoom and OIS capability.

All three smartphones include XMAGE image technology, which will enhance the photographic experience.

Meanwhile, each of these three phones has a 13MP selfie camera on the front. The Pro and Porsche Edition models, on the other hand, have an extra ToF 3D sensor for secure facial recognition owing to the bigger notch.