The Asus Zenfone Max Pro M1 launched earlier this June while the toned down version launched earlier on May. Both were claimed by the Taiwanese company as Battery Kings since they carry massive batteries.

The question is, which of these siblings will prove itself as the King in this battle?

Both phones share the same design features except that the Asus Zenfone Max M1 is smaller and has antenna lines at the top and bottom. Meanwhile, the Asus Zenfone Max Pro M1 is bigger and has different line details. At the rear part, both are built with a vertically aligned dual camera with an LED flash placed underneath the lenses. Aside from that, there’s also a rear-mounted fingerprint scanner and the Asus logo at the middle of the back panel.

Moving on to the sides, we can find the volume rockers and power button on the right and the SIM card tray that houses dual SIM cards on the left.

The bottom part of the phone houses the speaker grille, microphone, and the USB 2.0 port charger.

Upon using both phones, the Asus Zenfone Max M1 delivered a decent color representation and color vibrancy despite its resolution. However, if you compare it to the Asus Zenfone Max Pro M1 you’ll immediately notice which is better. You’ll appreciate its screen display during video playback and web browsing because of its vibrancy.

When we took them both outside during broad daylight to test its brightness, it showed that both phones are still viewable on different lighting conditions. 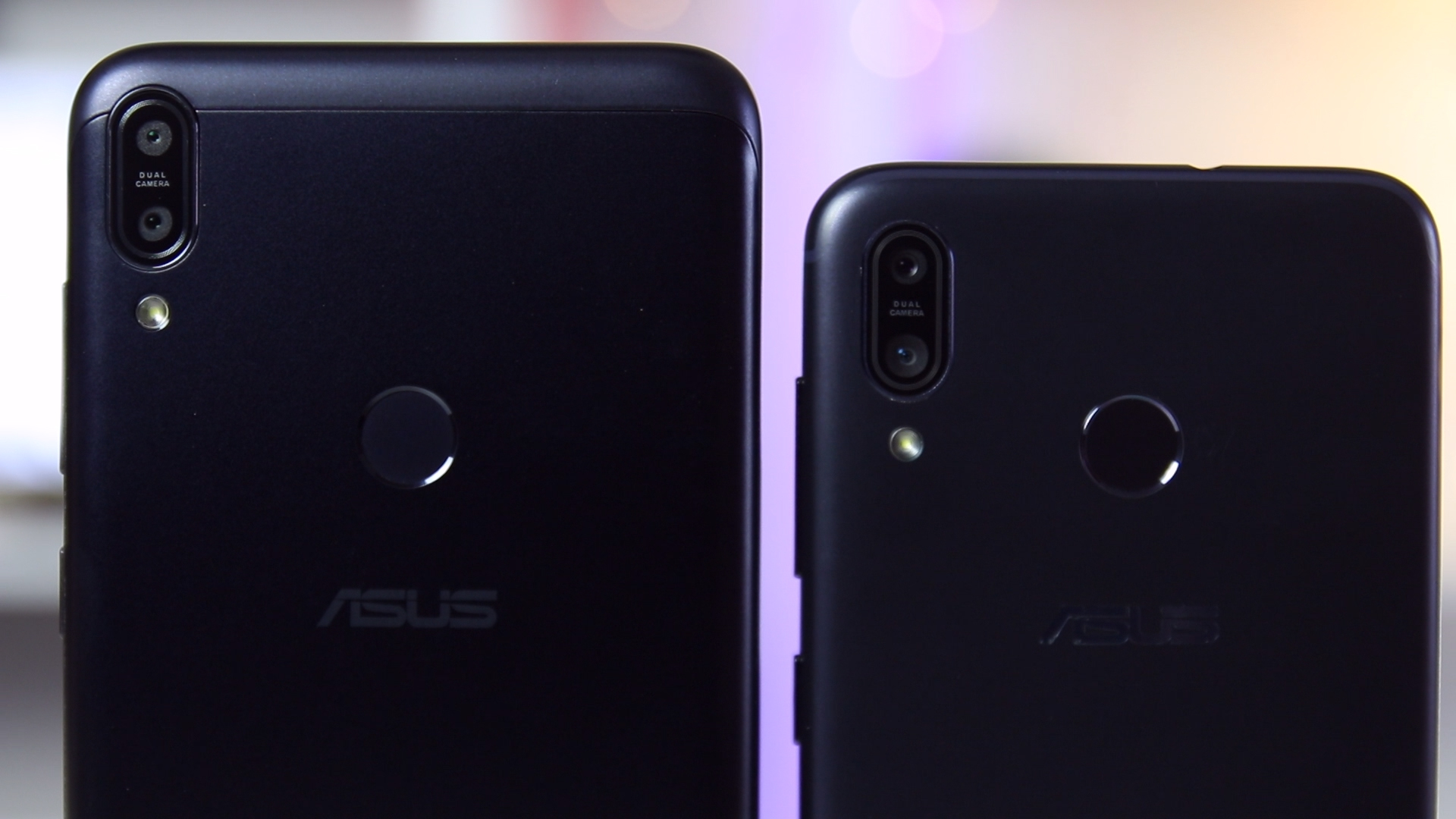 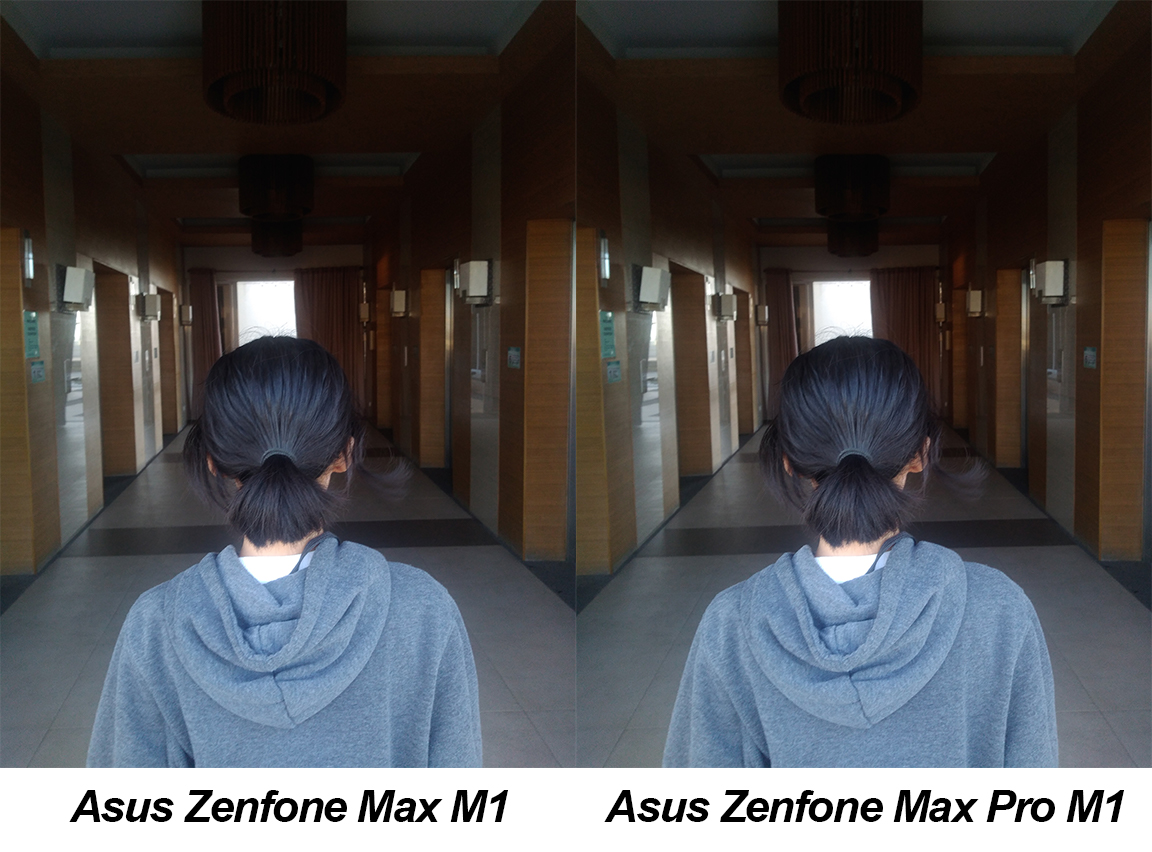 These shots are the same but with portrait mode. Shooting using the Max M1 was confusing that it took us a couple of shots because the photo didn’t look like it was on a portrait mode. Meanwhile, the bokeh effect in the Max Pro M1 is really noticeable that it really made the subject stand out in the photo. However, it got overexposed which can be seen on the subject’s skin.

Looking at the Asus Zenfone Max Pro M1 shot, its photo result was crisp and detailed. Take note that this was taken with HDR mode. Meanwhile, the Max M1 image is not that detailed but its photo rendered a more accurate color of the plants which gave it a lively feel.

Still using the HDR mode, these two made highly different results. The Asus Zenfone Max M1 shot came out accurately in terms of colors. On the other hand, the Asus Zenfone Max Pro M1 photo looked like it was post-processed because of the leaves vibrancy. It seems that the latter is consistent with delivering crisp and detailed photos in this mode.

While indoors, we tested how these phones will react to different lighting conditions using HDR mode. The Asus Zenfone Max M1 still had soft and blurred spots despite the mode being used. The lights were also scattered, unlike in the Asus Zenfone Max Pro M1. The lights around the plant were minimized so that the details won’t be covered. 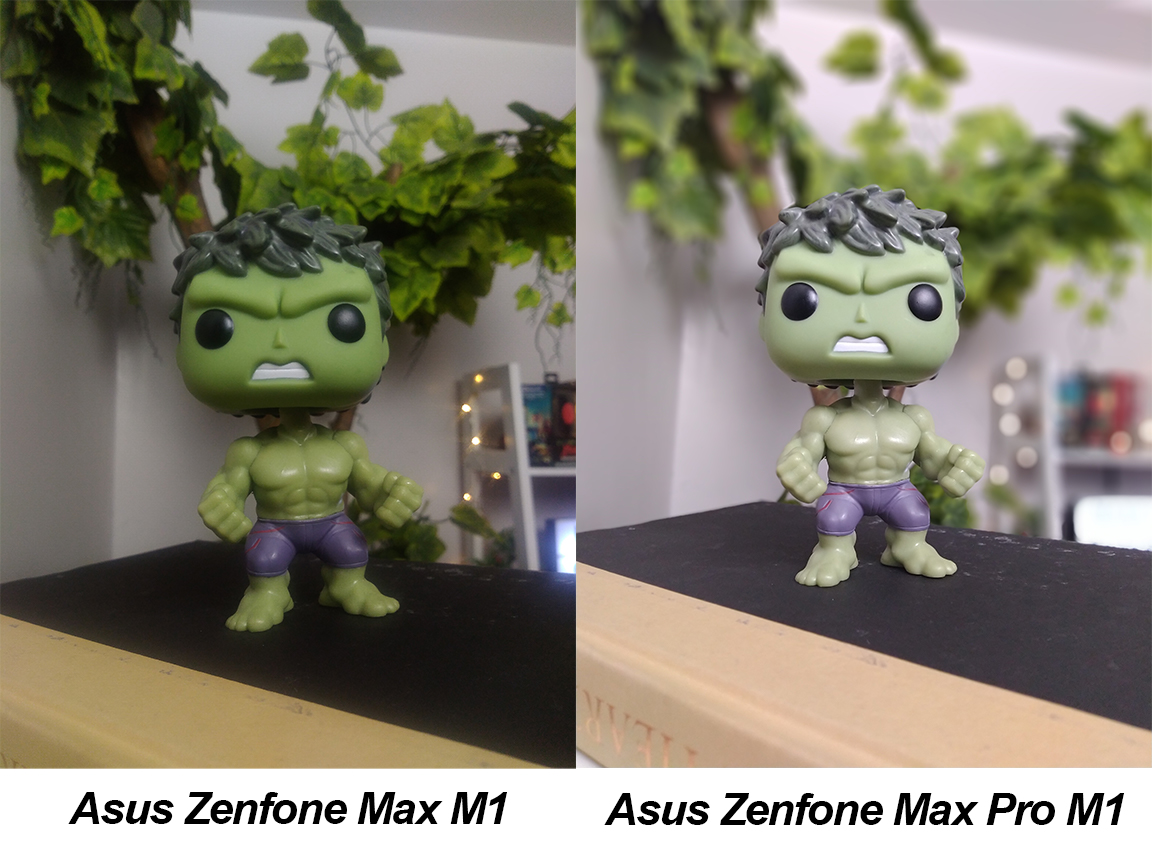 As compared to the first portrait shot of the Max M1, it improved on this shot. However, it is not as blurred as the Max Pro M1 which again delivered a sharp and crisp photo. 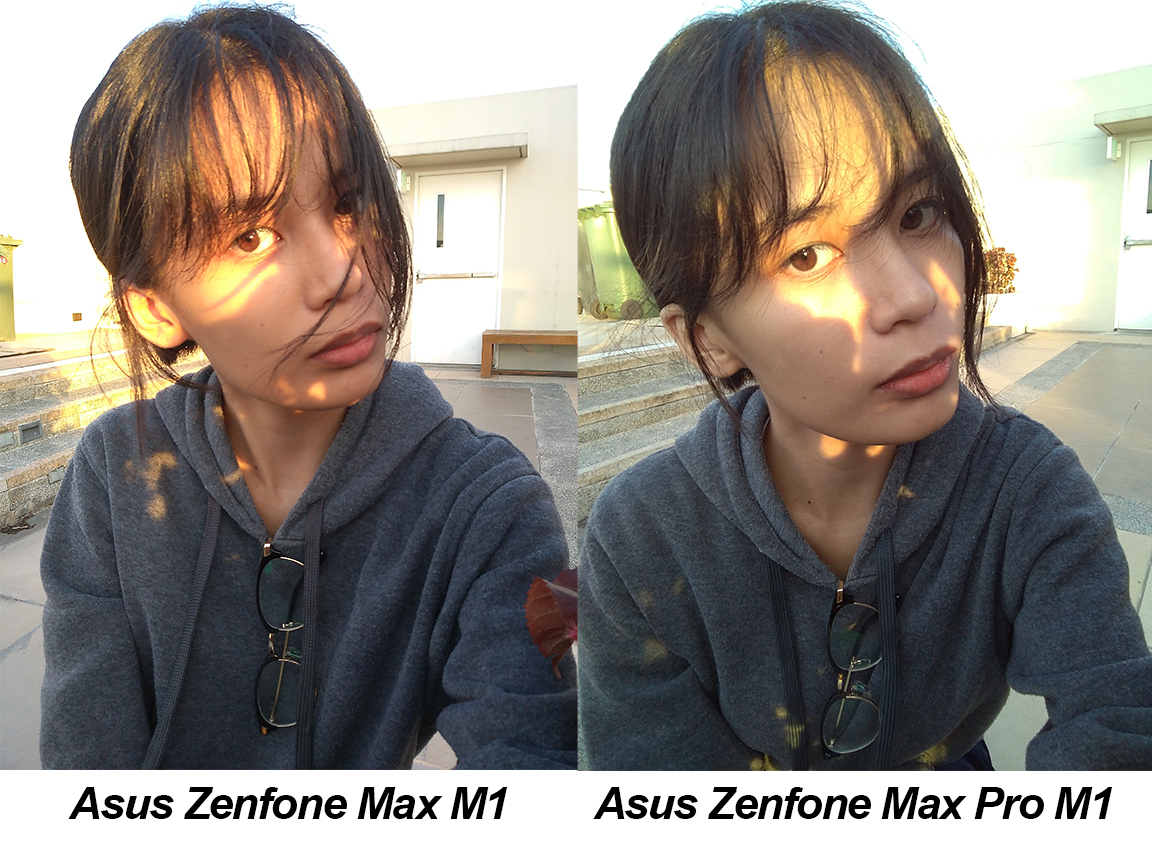 As what we’ve mentioned earlier, the Asus Zenfone Max M1 mostly results in a soft photo. The subject’s skin is not that detailed as what we can see on Max Pro M1’s side. To prove this further, the sweater’s texture is more visible on the Max Pro M1’s side.

We tested both handsets using the following benchmarking tools and here are the results: 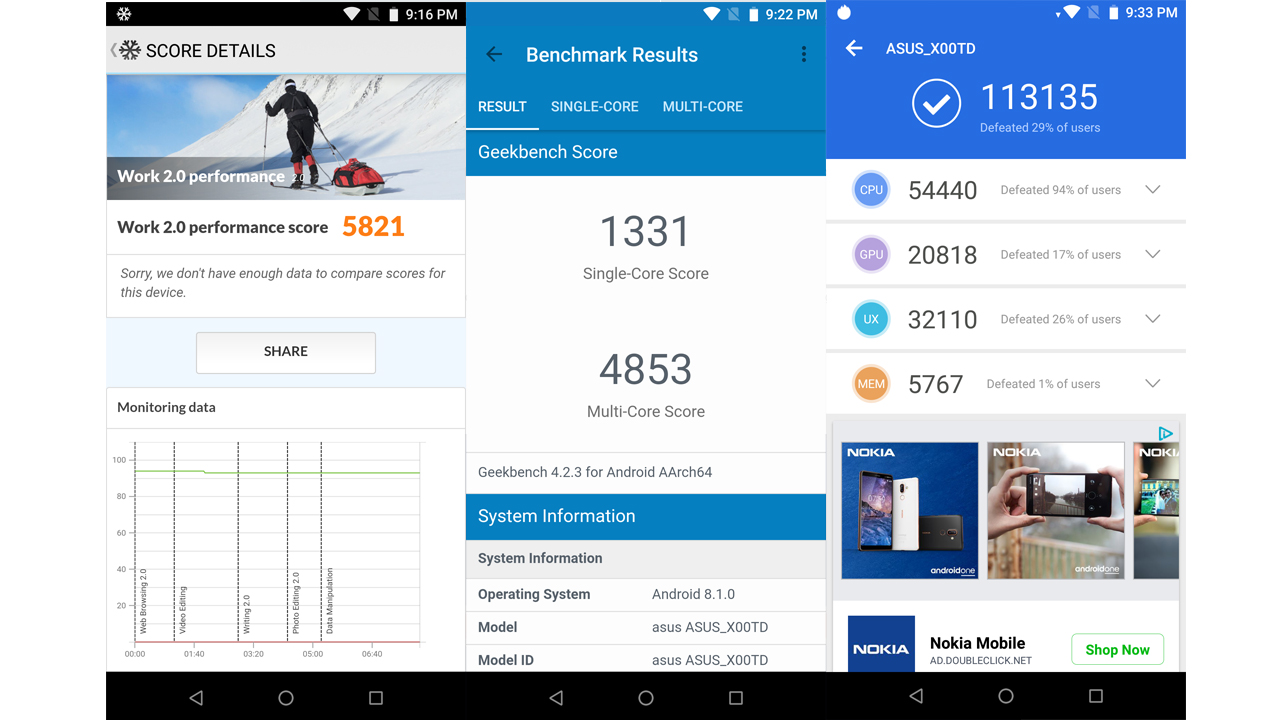 The Asus Zenfone Max M1 is powered by the Qualcomm MSM8937 Snapdragon 430 with Adreno 505 GPU, coupled with 3GB of RAM and 32GB internal storage. This smartphone runs on Android 8.0 (Oreo) with ZenUI 5.0.

Meanwhile, the Asus Zenfone Max Pro M1 is powered by the Qualcomm Snapdragon 636 along with an Adreno 509 GPU. It contains 3GB of RAM and an internal storage of 32GB which is expandable via a microSD card. In addition, the smartphone runs on Android 8.1 Oreo.

Unlocking the phone using facial recognition on the Asus Zenfone Max M1 was quite challenging, it had difficulty reading the user’s face and when it did, its response was not that fast. Furthermore, it was only able to work once. So with this phone, it’s best if you rely on the fingerprint sensor. On the other hand, the Asus Zenfone Max Pro M1 may not be the fastest but its response is decent considering it’s a budget smartphone.

If you like playing games like Counter Terrorist: Strike War, Asphalt 8, and PUBG, the Asus Zenfone Max M1 might not be the phone for you since it won’t give you the best gaming experience. Going back to the benchmark results, it scored less than the Max Pro M1 that’s why this device is not recommended for these type of games. However, it doesn’t mean it didn’t do well at all games. There are light games that this phone can still handle.

Of course, all of these still depends on you. So which do you prefer? Comment your thoughts down below!