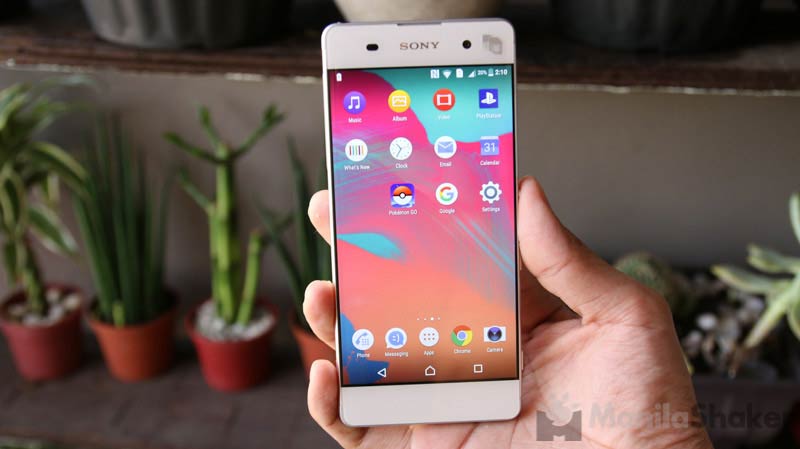 Sony’s ailing mobile phone division hit the refresh button on the Xperia Z lineup and called forth the Xperia X and X Performance at the flagship level, and now the Sony Xperia XA joins the ranks of the budget conscious. So how does the Japanese company define budget this time? Is the missing water-resistance feature a big deal for Xperia M4 or M5 users? Let’s find out in our full and in-depth review of the Sony Xperia XA dual.

Aside from the dual-SIM variant in the box, there’s also 1.5A power adapter, USB data cable, set of papers, and a stereo headset. The adapter amperage rating has increased compared to the previous mid-range series of Sony.

The new design language of the Xperia XA agreed with us in the aesthetics department. But it stops there as the Japanese manufacturer had to compromise on material choices to keep the phone affordable.

It’s all non-removable plastic at the back that meets its plastic frame that converges towards the 2.5D scratch resistant glass. The palm-loving XA is small enough for one-handed use, even for the dainty, thanks to its almost bezel-less screen.

The power button is located on the right panel above the volume rocker. The dedicated two-stage camera button sits further below. The dual-SIM tray can be found on the opposite side with a dedicated micro-SD card slot. Up top sits the 3.5mm audio jack and it’s the micro USB port with bottom firing speakers to round out the ports.

One of our biggest gripe is focused on this chin that does nothing but makes the phone symmetrical. Front firing speakers would have been nice, fingerprint scanner, capacitive keys, a slider for camera or volume controls, even a mirror would have made the choice bearable.

Yes, there is an apparent lack of a fingerprint sensor. No, it’s not water-resistant.

The screen is 5-inch HD IPS LCD with a bright and pleasing output and middling sharpness for its price. The thin side bezels and 2.5D beveled glass aid in overall navigation of the screen. Protecting the display is an unknown scratch-resistant panel.

The 13MP rear-facing camera doesn’t call to much fanfare as it does a so-so job of processing images – miles away from what we expected from Sony. It’s clear daylight shots with some hiccups on focusing and HDR does little in aiding color management though better than other phones in the same tier.

Selfies on the 8MP front-facing shooter are not as sharp and accurate as we had hoped with noticeable smudges due to post processing.

Both cameras can record 1080p videos with some stutters and shakes due to the absence of OIS.

The skinned Android 6.0 Marshmallow didn’t help in the overall usage of the device with some sluggishness apparent in navigation. Even calling apps like the messaging platform was slow considering its comes in stock. Having Switfkey built in helped a little in the typing department but only by a hair.

Running the device is a Mediatek octa-core Helio P10, 2GB of RAM and Mali T680 GPU, 16GB of on-board storage where only 10GB is user accessible with an option to expand.

The included chipset won’t break any records but it does the job when it comes to average daily usage and some casual gaming.

It all goes downhill from there as the Sony Xperia XA dual packs only 2300maH of juice that scored poorly or below average against other phones in the same calibre. Topping up took 2 hours and some change with the absence of fast charging capabilities.

The mono speaker at the bottom is frail and could get loud sometimes but failed to make us appreciate what we were trying to listen to. There’s no high-res bit or DAC inside unlike on the high-end Xperia X and X Performance.

It’s a good device especially for those with small hands but is way too expensive even for a mid-ranger with below average overall rating and sad battery endurance to boot. Poised at PHP12,000 – PHP 14,000 we’d have expected it to at least have a great camera experience, since Sony knows camera sensors, and/or an IP68 waterproofing. As per usual Sony marketing strategy, it’s too little for so much price. You’re better off looking elsewhere.

What do you think of the Sony Xperia XA? Let us know in the comments section.

Lenovo Legion Phone Duel 2 – Unique Design with Cooling Fans, But is it Durable?