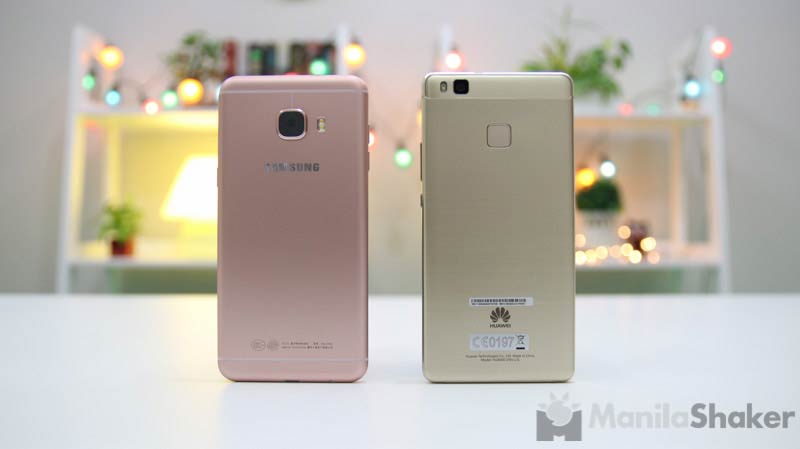 Samsung’s new mid-ranger, the Galaxy C5, meets another contender in our comparison treatment and that’s the Huawei P9 Lite. With a decent specs sheet for a lower price than the Galaxy C5, does the P9 Lite makes a better option as a mid-range Android? Find out in out review.

The Huawei mid-ranger shares the solid build to the more capable Huawei P9 and P9 Plus but in a slightly smaller footprint. Its squarish exterior is made of metal and noticeably provides good grip as the rounded build of the Galaxy C5. But aesthetically speaking, the latter looks more attractive due to more refined styling. Don’t get us wrong, the P9 Lite does look good though in its own form.

In terms of external features, the setup on either device is pretty standard with LED notification light, hybrid microSD card slot, USB 2.0, and fingerprint sensor. The Galaxy has its scanner embedded on the home button while flanked by two backlit capacitive keys whereas the Huawei relies on an onscreen button.

Overall, we felt the Galaxy C5 has a better-looking design with its curved screen and standout form factor.

Both offer 5.2-inch wide and Full HD real estate screen with the P9 Lite on pleasing IPS LCD while the Galaxy C5 has noticeably brighter and more saturated Super AMOLED panel. The difference in color can be slightly narrow down through the display settings on either display. Nonetheless, the similar sharpness level and crisp output make them tie in this round.

The sensor on the Galaxy shooter is the same 16MP f1.9 camera as to the more capable Galaxy A9 Pro and Galaxy C7. Compared to the 13MP f2.0 of the Huawei shooter, the Galaxy C5 produces decent photos but with pale colors, which is a disappointing.

On the other hand, the P9 Lite produces natural looking and deep contrasty photos even in front-facing selfie shooting. Most of the shots look great despite the overly black levels.

For video recording, both take up to 1080p or Full HD resolution and lack a proper optical stabilization. Either way, the video quality is comparable to their still photos.

If we’re to pick a winner here, the P9 Lite easily gets the cake on this round.

Performance on both mid-rangers is toe-to-toe while the P9 Lite edges out in Antutu benchmark, thanks to the slightly overclocked octa-core processor despite the lesser amount of RAM. However, if you’re looking for extra onboard storage, the Galaxy C5 has a bigger internal starting at 32GB or up to 64GB variant.

Battery life is fairly average on either hardware with the P9 Lite slightly lasting a few more hours in endurance rating due to the larger 3000mAh juice inside compared to the 2600mAh on the Galaxy. Meanwhile, charging the latter is faster because of the fast adaptive charging and relatively smaller capacity but the difference is just about 30 minutes. So totaling the two areas, the extra juice on the Huawei still deserves the trophy on this round.

Finding a built-in high-res audio feature on a mid-range Android is still pretty rare these days that’s why the P9 Lite easily wins our vote. Additionally, its mono speaker outperformed the tinny speaker on the Galaxy.

With a P11,990 or roughly $250 USD price, the Huawei P9 Lite with a reliable camera is definitely the better choice over the Samsung Galaxy C5 at about P14,990 or $320 USD price. But if you’re looking to pick up a more stylish phone with extra memory, perhaps the latter is the choice although for a few more thousand.