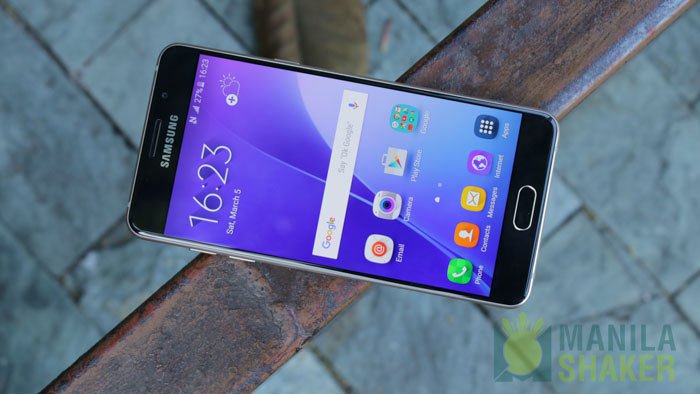 It’s the time of the year again where Samsung refreshes its Galaxy A-series. The latest is the Samsung Galaxy A5 2016 edition (priced at P19,990 pesos in the Philippines). What do the new Galaxy A5 2016 offer on the table? Is it faster in performance and better looking than Galaxy A5 2015? Or does it have a more value for your money than the other Galaxy Android phones like J5, A3, A7 or A9?

Let’s find out the answers in our Samsung Galaxy A5 (2016) comprehensive comparison and full review.

Unboxing – What’s in the retail box?

The Samsung Galaxy A5 (2016) is the best-looking mid-range I’ve used. It follows the design language of the Galaxy S6 a lot. The side is wrapped in aluminum metal while front and back are covered with 2.5D curved glass.

We really liked the arc design on top of the Gorilla Glass 4 as it gives a seamless feel. Swiping on the screen felt smooth, although the curved glass was a bit slippery in the hands.

At 7.3 mm thick and 155 grams weight, the size of Galaxy A5 is perfect in for one-handed usage. Of course, your mileage may vary.

Bulging in the front is the home button embedded with a fingerprint scanner that’s fast and accurate. Both backlit navigation keys respond snappily. The positioning of buttons is very familiar. The right side houses the power button while the volume rocker is placed on the left.

Color options include the gold variant we reviewed.

Rocking a 5.2-inch 1080p Super AMOLED panel, Galaxy A5 has one of the best displays out there. Colors are punchy and saturated with inky, deep blacks. We noticed that the display is brighter and produces more contrast than the older model. The screen is protected with a Gorilla Glass 4.

The main shooter on the back is a 13MP that shoots 1080p FHD movie. It is paired with an Optical Image Stabilization (OIS) and an LED Flash. The front-facing is a 5MP snapper capable of 1080p video too.

In terms of quality, images are bright and look great on the Super AMOLED screen. But upon comparisons, we found out that shots lack saturation or bland, edgy, and with poor detail preservation. Sometimes the shots are overexposed. There’s HDR but you’ll need to activate it as the automatic mode is not reliable.

Night shots are worse as a lot of detail are crushed, producing into a paint-like output.

Portrait photos from the 5MP selfie snapper are bright and with good smoothening level. But again, the colors are lost thus subjects look pale.

The quality of the 1080p video, at least, is better than the still photos. You can check the footage below.

Samsung opted for older generation Qualcomm chipset, which is the Snapdragon 615 octa-core. It is not the top performer in benchmark charts, but it was able to keep the experience on the device smooth with very minimal lags in multi-tasking and runs graphics-intensive games effortlessly.

Out of the box, the Galaxy A5 runs Android 5.1.1 Lollipop and is upgradeable to Android 6.0 Marshmallow. On top of the OS is a TouchWiz UI, rich yet felt a bit dated in terms of user experience.

Under the hood is a 2900mAh battery that supports fast charging and could last up to the 2nd day in a single charge. The on-screen time is around 4-5 hours, which is above the average lives of most mid-range phones today. Charging time in 1 hour and 30 minutes. 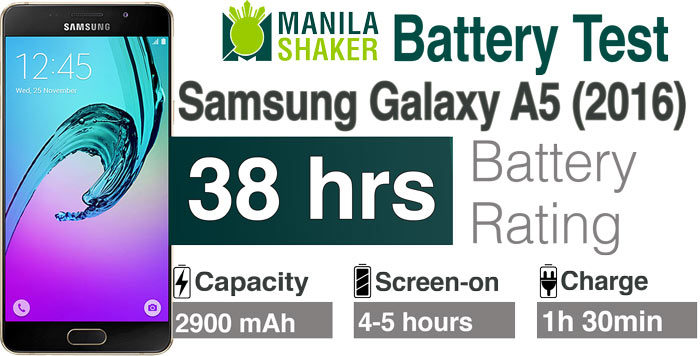 The mono speaker at the bottom produces clear and crisp vocals output. However, bass and volume are underpowered. And the positioning of the speaker is easily muffled when watching a video in portrait.

With a P19,990 official SRP from Samsung Philippines, the Galaxy A5 2016 edition is quite expensive for a mid-range Android Lollipop. However, after using it for a while as my daily driver, I think it’s still worth the money. That is mainly because of the solid hardware combination it offers–reliable battery life, premium design, and flagship-class display. 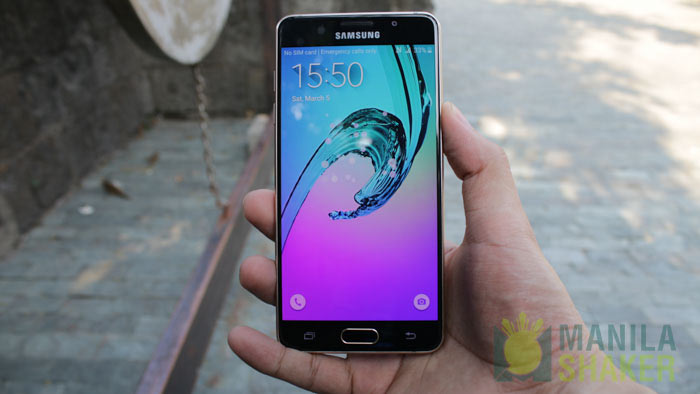 On the other hand, the only major step back for those planning on buying the phone is the camera, which is still acceptable if you intended to share most of the photos to Instagram and Facebook.

Now to answer the question of which one to buy between the Galaxy A5, A7, and A9. No doubt, I will pick the A5 any day. It’s the mot valuable mid-range from the Galaxy A-series with almost features the same as the two and just for a little less in price.
Video Review