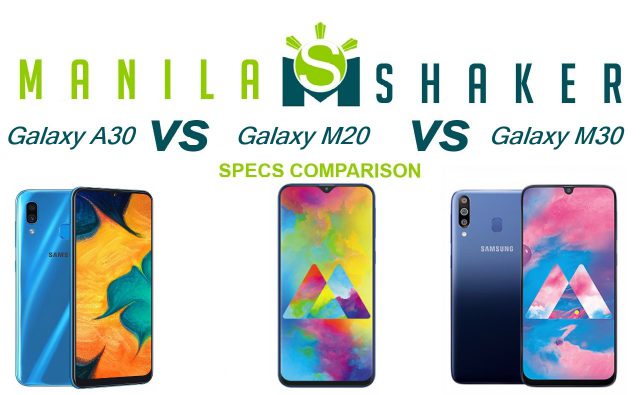 Samsung is on a roll with its mid-range smartphones this 2019. We recently compared its budget phones — the Galaxy A10 and M10. This time, we’re moving the tier a bit higher with the Galaxy A30, M20, and M30. For less than Php15k, which device should you go for?

How Samsung Galaxy A30 stands out

How Samsung Galaxy M20 stands out

How Samsung Galaxy M30 stands out

Which is the right one for you?

Choosing the Galaxy M30 means choosing the best among the three mid-range Galaxy devices. Aside from the FHD+ Super AMOLED display and its metal and glass design, the M30 can go up to 128GB/6GB and even packs a triple camera setup. But the best part is its massive 5000mAh battery capable of 15W fast charging.

If you somehow find the Galaxy A30 to be attractive than the three, it’s specs are nearly identical to the Galaxy M30 but with a conservative dual-main camera and 3GB/32GB base model. It also has the slightly less powerful Exynos 7885 but at least it comes with a 16MP selfie camera and Android Pie with One UI skin.

For consumers tight on budget, the Galaxy M20 will be the way to go here. It has almost the same specs as the Galaxy A30 but with a toned-down 13MP + 5MP ultrawide main cameras and 8MP selfie sensor. You won’t be having that beautiful display like an AMOLED screen but it still provides crispy quality with its FHD+ IPS LCD screen.

Prices for the following Samsung mid-range phones are as follow:

In terms of pricing, these three are reasonably well-priced but the Galaxy M30 feels like a steal here when compared to the Galaxy A30.