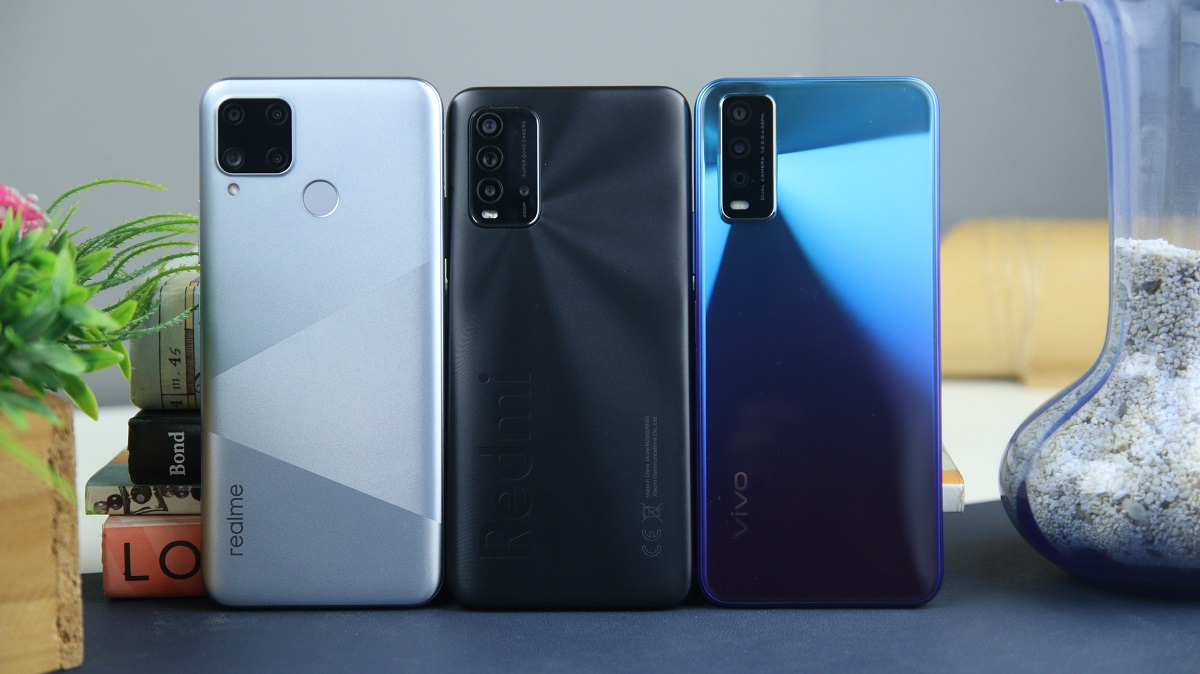 There’s no doubt that smartphones in 2021 are at an all-time high when it comes to the number of new releases. This is also the year where there’s a vast selection for consumers out there, according to the range of budget. In the Philippines, phones can go anywhere from above P50,000 or below P15,000, but did you know that you can actually get a good smartphone experience for under P8,000?

Under that category, we have the Redmi 9T, Realme C15, and Vivo Y20i. All three are classified under the ‘budget’ range, but which of the three offers the best value for money? There’s only one way to find out – we compare each aspect of the phones, including the performance, camera, and battery. But just like any other device, let’s start with the design. 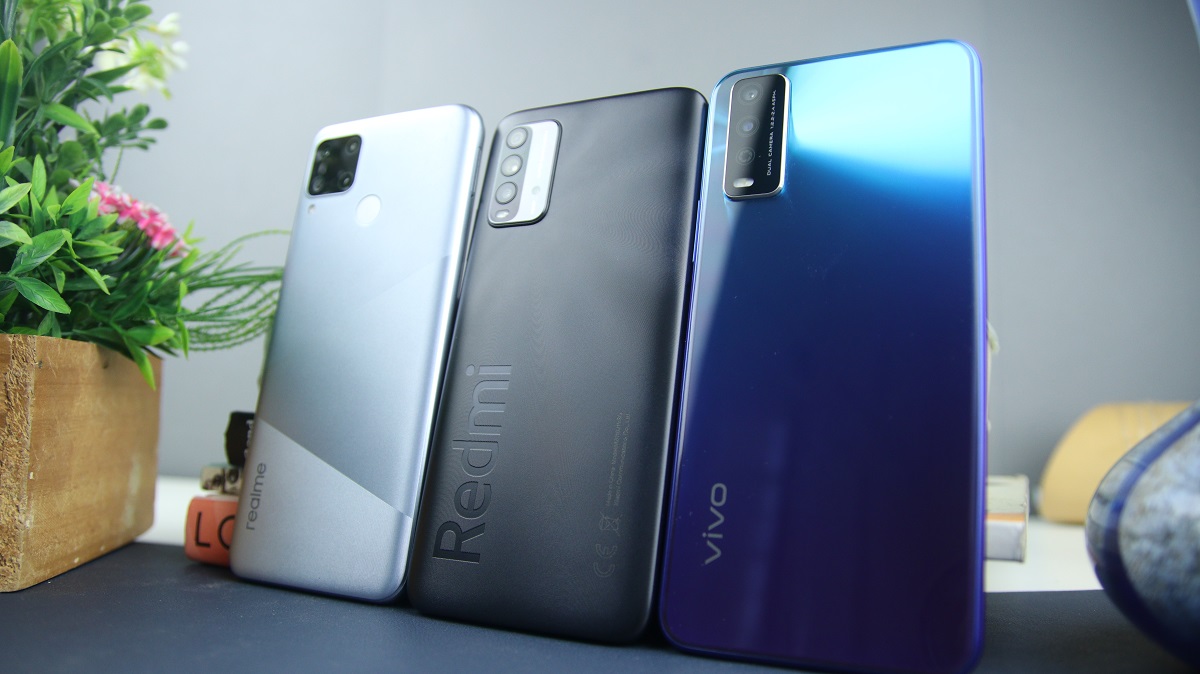 The three devices have similar all-polycarbonate build with the Redmi 9T and Vivo Y20i having more striking designs, thanks to their prism-like finish. Although the Realme C15 and Redmi 9T deliver that grippy experience due to their textured backing, the C15 has its fingerprint scanner conveniently located on the back, as opposed to the side-mounted style of the y20i and Redmi 9T. Regardless of positioning, all three are fast and reliable as capacitive scanners should be. If we have to pick though, we like how the Redmi 9T combines the flashiness of Y20i and the grippy-ness of C15 in one package.

Another key selling feature of the Redmi 9T and one of its biggest advantages versus the two budget phones is the Full HD+ display. It means videos and photos appear sharper than the two and will provide a more enjoyable content consumption experience. In fact, you can watch HD videos on Netflix as the device is widevine L1-certified. While all three are using IPS LCD for wide viewing angles and natural color reproduction, the Realme C15 and y20i decided to stick to 720p to save battery and make games run a little smoother due to the fewer pixels needed to render. For the budget gamers out there, this is an important thing to note.

At this price point, however, it’s hard to achieve that ‘good’ gaming experience. That said, would you rather have a pixelated display that barely runs the most demanding games, or you would rather enjoy a better-quality display while being able to run casual games on the side?

As for cameras, these devices have a big difference, at least on the spec sheet. Both the Realme C15 and the Redmi 9T have a quad-camera setup, featuring an 8MP ultrawide lens and a pair of 2MP lenses for macro and depth. However, C15’s other 2MP lens is actually a monochrome sensor for capturing more details. On the other hand, the Vivo Y20i has a triple camera setup but lacks an ultrawide sensor.

Redmi 9T’s biggest advantage here is having a 48MP sensor – a bigger sensor found on POCO F3 and POCO X3 Pro. Both the C15 and the y20i are still using 13MP main cameras, though.

Oftentimes, having high megapixel camera sensors is important, but we always preach that numbers don’t explain everything. Well, let’s see how all three cameras fare in our tests.

Using the main camera of each device, all three output detailed photos with dark shadows. However, the Redmi 9T has the most contrast and the sharpest image, thanks to the bigger 48MP sensor. On the other hand, the Y20i has natural colors compared to the Realme C15.

In the next photo sample, a sample street shot gave us the same results. They still have the same detailed images, with Redmi 9T having boosted colors and both the C15 and y20i having pale-looking renditions. Unlike our first sample image, the Realme C15 this time didn’t output blown-out highlights. Moreover, the Redmi 9T and Realme C15 trade blow in sharpness quality.

With HDR turned on, the Redmi 9T’s results are crispier with the same deep blacks. For the Realme C15, it went from overexposed to a pretty much well-balanced image. Lastly, Vivo Y20i went for a very balanced image — maintaining its natural colors.

In this next image, we give points to Redmi 9T and the Realme C15 for delivering very good color reproduction, highlights, and blue sky. Vivo Y20i on the other hand overexposed a little bit.

Continuing our dynamic range test, Realme C15 delivered the most pleasing shot, regardless of HDR mode. Redmi 9T comes second, albeit washed out, while y20i struggled to keep its natural processing.

With only indoor lighting present, the Redmi 9T delivers bright shots with overexposed highlights. Its sensor further shows superiority against the Vivo Y20i, though, that comes with a warmer indoor shot and the Realme C15 with punchy yet over saturated shot.

On the Next sample photo, Vivo Y20i did an impressive job on making a sharper and more detailed image.

Taking photos in low light, the Redmi 9T and Realme C15 output sharp and detailed images in this challenging scenario. The Redmi 9T retains the punchier colors but with noticeable noise and grain on the background, while the Vivo Y20i clearly struggles to deliver a bright shot.

Switching to ultrawide, we only have the Redmi 9T and the Realme C15 in this category since Vivo forgot to include an ultrawide lens on its phone.

With HDR off, the result from the C15 is overexposed while the Redmi 9T provided a better dynamic range. With HDR mode on, with the Redmi 9T, we get a very sharp and contrast image, although it loses sharpness around the edges. For the Realme C15, it is still a bit exposed but not as bad as its first try, albeit with flaring.

For portrait mode, the Redmi 9T has a shallower depth of field and colorful reproduction, but its highlights are a bit brighter. On the other hand, the Realme C15 tones down the bokeh but retains a sharper image. Lastly, the Vivo Y20i looks almost like a regular photo but with decent sharpness.

For portrait mode, the Redmi 9T has a shallower depth of field and colorful reproduction, but its highlights are a bit brighter. On the other hand, the Realme C15 tones down the bokeh but retains a sharper image. Lastly, the Vivo Y20i looks almost like a regular photo but with decent sharpness.

Heading to the selfie — all of them have an 8mp selfie camera with decent quality as long as abundant light is present. With outdoor selfies, both the Vivo Y20i and the Realme C15 came away with a warmer tone than the Redmi 9T. Skin tones, on the other hand, are pinkish on the Realme C15 and soft on the Vivo Y20i. 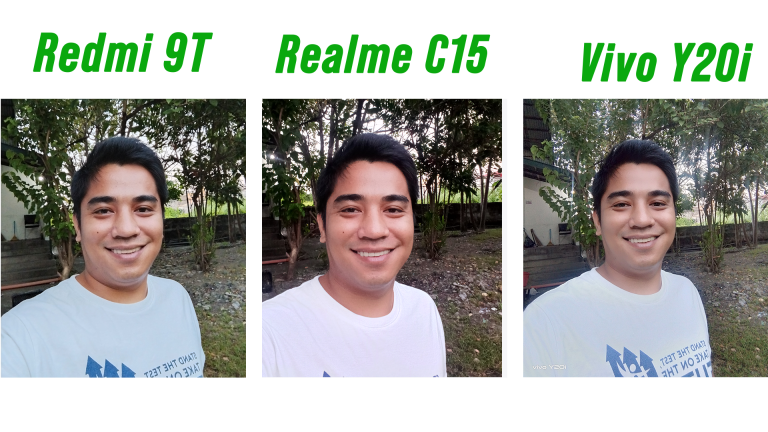 On this next sample, the Realme C15 outputs the same skin tone color, but the y20i struggled in contrast and dynamic range. 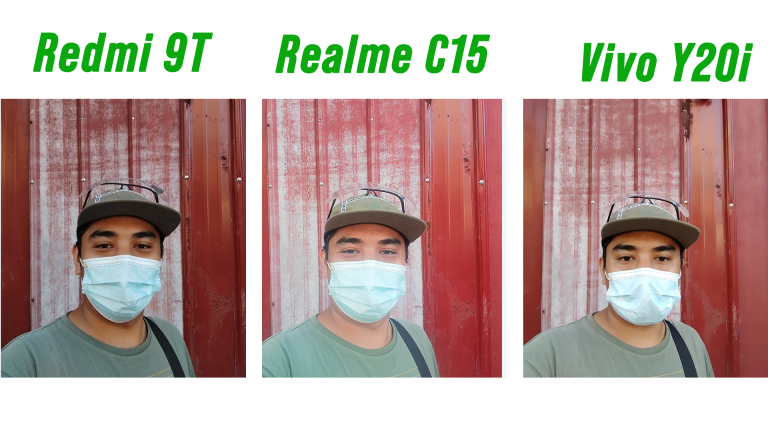 All in all, the Redmi 9T came away with better-looking shots in almost all scenarios, thanks to its bigger sensor. Realme C15 is second, but the 13MP sensor has shown its age. The y20i, however, struggled to keep up.

All in all, the Redmi 9T came away with better-looking shots in almost all scenarios, thanks to its bigger sensor. Realme C15 is second, but the 13MP sensor has shown its age. The y20i, however, struggled to keep up.

READ: Redmi Confirmed to Release First Gaming Phone by The End of This Month

For connectivity, all of them have 5.0 Bluetooth, and both the Redmi 9T and the Vivo Y20i support dual-band WiFi connection, a feature that’s missing on the Realme C15 to accommodate better and faster internet connection from the modem.

Another advantage of the Redmi is having an IR blaster which is useful in connecting and controlling to other supported devices.

On to performance, Redmi 9T has the most capable chipset between the three, which is the Snapdragon 662. Realme C15 is using the Helio G35 while Vivo Y20i is sporting the Snapdragon 460, which happens to be inferior to the 662. Neither of them are made for intense gaming, but day-to-day tasks are nearly on par with each other. In other words, they get the basic tasks done. But if you want a phone that’s likely to last long, the extra headroom on the Redmi 9T will provide just that.

As for the software they all run on Android 10.0 out of the box, with their respective UI on top. Realme C15’s realme UI is known for its minimalist and lightweight design, while Vivo Y20i has a fun and creative UI thanks to Funtouch OS, albeit a bit stuttery in our experience. Lastly, the Redmi 9T still gives you tons of features whether it’s in the settings or the stock camera app. Despite their differences, this one depends on your preference.

For the battery, both the Redmi 9T and the Realme C15 pack a 6000mah power battery while the Vivo Y20i only has 5000mah capacity. It’s still large but not as large as modern phones today. They all have 18W fast charging, but Redmi 9T supports 2.5Watts reverse-wired charging.

Despite having more pixels to display, the Redmi 9T delivers longer battery life versus the other devices, consistently lasting a day and a half in mixed usage. Although it’s also possible to achieve that on Realme C15, the Y20i showed that it’s a solid all-day phone.

Charging the devices from 0 to 100 percent, all three took around 3 hours to top up for some reason.

To sum up this comparison, the Redmi 9T still offers the best value phone under P8,000. Whether it’s the battery, design, display, camera, and even RAM and storage, Xiaomi continues to offer the best package while being competitively priced on the market. Realme C15 comes second in our comparison, boasting slightly better gaming experience thanks to its GPU and lower display resolution. But you do have to live with a slightly worse camera. Lastly, Vivo Y20i is a hard phone to recommend if you’re looking for decent performance or a camera. Though the design is flashy, the company still needs to couple that with decent internals.

READ: Redmi Note 10 Review – Is it the New Midrange Killer?