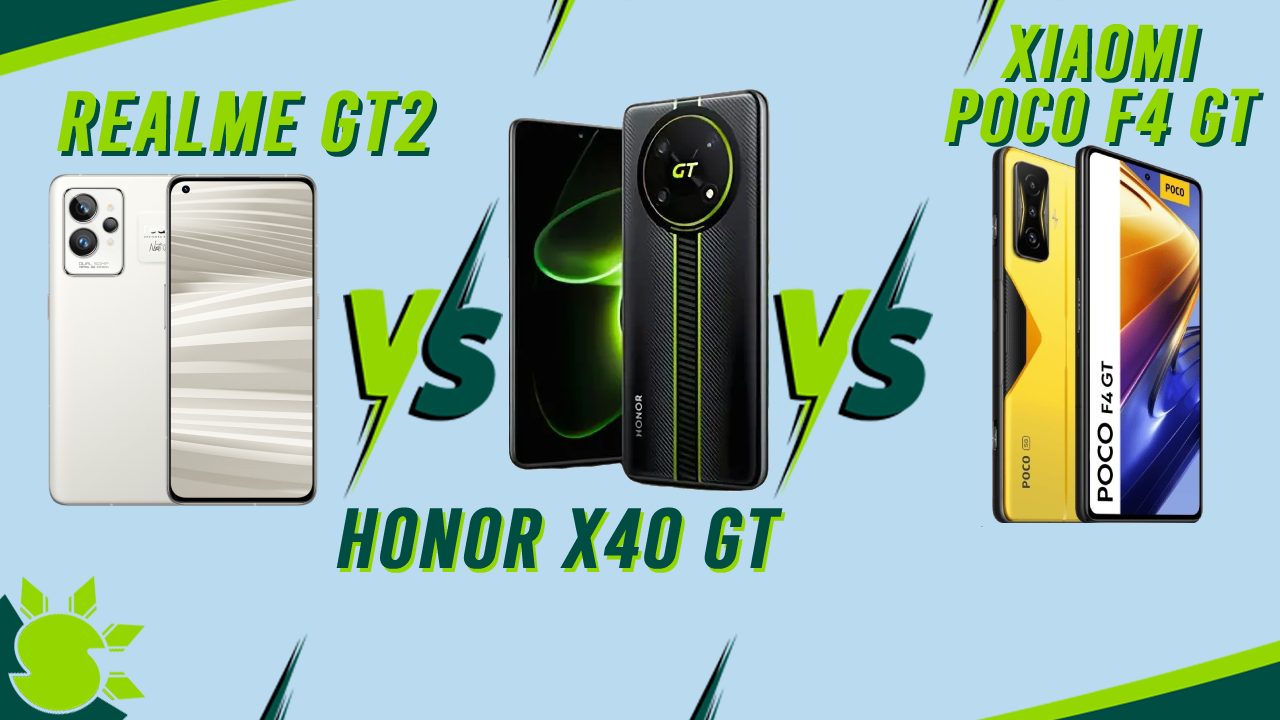 If you’re looking for a new gaming phone with good value for money, you should surely consider the new Honor X40 GT, as well as practically every phone with the “GT” tag within its name. Several GT phones were introduced this year by various companies. They are also in the same pricing range as the Honor. One of them is the realme GT 2, the first phone from the brand to launch a GT series. But Xiaomi also introduced one: the POCO F4 GT. Which is the best? We hope you’ll find it by reading our comparison of the Realme GT 2, Honor X40 GT, and POCO F4 GT specs.

Watch: Realme GT Neo 3 Review – Can It Outrun Its Rivals?

It is simple to note that the Honor X40 GT and the POCO F4 GT have a very gaming-centric design. You also get actual pop-up gaming triggers with the POCO, which might improve your gaming experience. The realme GT 2 has a conventional design that is more elegant and somber, and it comes in two color versions made of a material that has a touch and feel comparable to paper. Do you prefer phones with gaming-centric designs or a more standard smartphone if you are a gamer?

The POCO F4 GT features the most enticing display, with a brilliant AMOLED panel capable of displaying up to one billion colors, a diagonal of 6.67 inches, a Full HD+ resolution of 1080 x 2400 pixels, a 120 Hz refresh rate, HDR10+ certification, and an in-display fingerprint sensor. The realme GT 2 takes silver with a 6.62-inch AMOLED display with Full HD+ resolution, a refresh rate of 120 Hz, HDR10+ certification, and an in-display fingerprint reader. The Honor X40 GT boasts a higher refresh rate of 144 Hz, however, it falls short since it features an IPS LCD screen rather than an AMOLED display.

The Realme GT 2 is the most sophisticated camera phone in this comparison. It sports a triple camera arrangement that includes a primary 50 MP sensor with OIS (a Sony IMX766 sensor), an 8 MP ultrawide camera, a 2 MP macro shooter, and a 16 MP front camera. It is the only one of the three that has optical stabilization. The Honor X40 GT is a letdown: it sports a 50 MP primary camera without OIS and no ultrawide lens, instead opting for a pair of 2 MP sensors for macro and depth computation. With a 64 MP primary camera, an 8 MP ultrawide shooter, a 2 MP macro lens, and a 20 MP selfie snapper, the POCO F4 GT falls square in the center.

If you want the most powerful hardware, go with the POCO F4 GT, which is powered by the Snapdragon 8 Gen 1 mobile platform with a maximum frequency of 3 GHz, along with up to 12 GB of RAM and up to 256 GB of internal storage. The realme GT 2 and Honor X40 GT have identical RAM configurations. However, they use Qualcomm’s weaker Snapdragon 888 mobile platform, which runs at a maximum frequency of 2.84 GHz. These smartphones ship with Android 12, and we anticipate at least two major Android upgrades (three for the GT 2 by realme).

With a capacity of 5000 mAh, the realme GT 2 has the largest battery and should last longer in a variety of settings. With a charging capability of 120W, the POCO F4 GT offers the quickest charging technology.