Upping the budget up a bit to Php17,990 gets you three devices to be exact — Realme 7 Pro, Samsung Galaxy A51, and Vivo V19 Neo. At this price point, we start to see mid-range phones offering special features without breaking the bank. And if your budget happens to be around it, let’s see which of the three offer the best value for your buck.

How will the newer contender, Realme 7 Pro, fare against its rivals? Are the faster CPU and SuperDart 65W charging enough to beat the competition? Is the bigger 64MP quad-camera offering provide better value for your money?

From the rearview of things, all three devices look alike. There’s no capacitive fingerprint scanner in sight, with only the quad-cameras complementing their polycarbonate finishes. The same goes for the screen size, ranging between 6.4-6.5″ with FHD+ Super AMOLED Gorilla Glass 3. As a result, all three are capable of display punchy colors and deep blacks with good accuracy and high brightness. What’s funny, however, is that each device has its selfie pinhole placement — top-left, top-center, and top-right. Nevertheless, these devices come equipped with at least a 4000mAh battery and respective fast-charging solutions as well as in-display fingerprint scanners, 32MP selfie cameras, and a dedicated microSD slot.

Why Choose Realme 7 Pro and why it’s better buy?

Realme 7 Pro, at Php17,999, is where the company’s most competitive price point yet. Given the drastic change of offerings from Realme 6 Pro, some of you may not feel upgrading. However, if you happen to be looking for a reliable all-around device that gives the best value for the price — look no further than Realme 7 Pro. It’s impressively thin and light provided what you’re about to get. Sure, there’s no 60Hz here, but you do have Always-on Display for quick glancing at notifications. On top of that, Super AMOLED offers way better picture quality than IPS LCD, enough to put Realme 7 Pro side-by-side with some of the flagship competition.

As for raw performance, Realme 7 Pro is the fastest and most capable in this group, thanks to Snapdragon 720G. Paired with 8GB RAM and 128GB UFS 2.1 storage, you can even play the most popular game as of recent – Genshin Impact. Much like Realme 7, the 7 Pro gets upgraded 64MP quad-cameras and 32MP selfie due to the switch to Sony sensors. It’s also the only device with a massive 64MP camera. Thanks to a super large sensor, you can go up to 5x zoom with little quality compromise. If you’re looking for that kind of camera flexibility in a phone that doesn’t require you to spend a lot, there’s no reason not to get the Realme 7 Pro.

While we have to remind you that 4500mAh is still the largest capacity in this group, it’s a non-issue when you have a 65W fast charging solution here. This is the first time we’re seeing flagship-level of charging speed in a mid-range phone that costs a fraction of the most expensive ones out there. Within 35 minutes, you can get up to 100% in no time. As a bonus, Realme 7 Pro also comes with stereo speakers and support for 24-bit hi-res audio playback through the headphone jack.

Why Choose Samsung Galaxy A51?

If you’re going to pick the Galaxy A51, your main reason should be “because it’s a Samsung phone.” Apart from one Samsung’s One UI has to offer, the Galaxy A51 is the sleekest of the bunch. It’s only 7.99mm thin and weighs 172g. And, that’s despite the massive 6.5″ Super AMOLED screen. At Php17,990, you’re getting slightly less RAM at 6GB. Additionally, Exynos 9611 is a decent chipset for tasks but not gaming. With that in mind, you need to be mindful of priorities when getting this phone.

As for the cameras, the standard quad-camera setup is complete — 48MP main sensor, 12MP ultrawide, and a couple of 5MP lenses for macro and depth purposes. Video recording goes up to [email protected] with EIS on lower settings. Though the selfie camera is capable of up to [email protected] video, there’s no EIS in tow, unlike Realme 7 Pro. The battery is rated 4000mAh — the smallest of the bunch — but also charges at the slowest at 15W.

Despite the shortcomings, the Galaxy A51 still did a few things right such as the centered pinhole camera and its thin & light design. 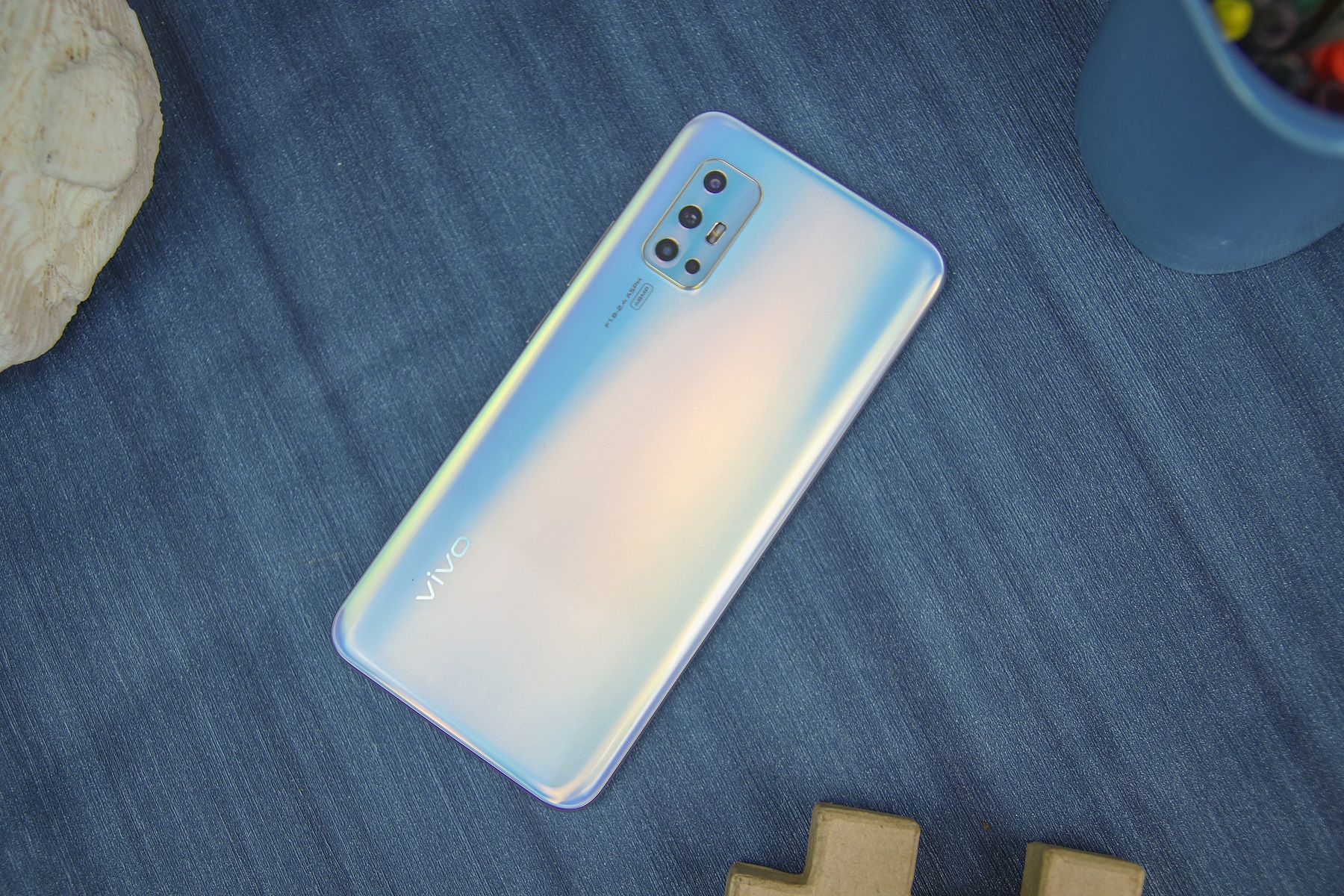 Although the Vivo V19 Neo released last June, it packs the oldest chipset of the group — the Snapdragon 675. Based on a large 11nm node, it’s an underwhelming performer when compared to Snapdragon 720G. But during our review, the chipset performed surprisingly well than expected. Whether that’s FunTouch OS’ optimization or Vivo just doing its own thing is a mystery. With that in mind, we can even say that its performance is sometimes even better than the Exynos 9611. On top of that, there’s 8GB RAM already. But for the rest of the spec sheet, Vivo V19 Neo looks a lot like the two — 48MP quad-cameras, 32MP selfie with no EIS, and a massive 4500mAh battery with 18W fast charging.

While the images of V19 Neo doesn’t appeal too much as the other two devices, it actually looks better in person. What’s more, it has the smallest pinhole selfie cutout among the three. If you don’t mind sacrificing performance over the beautiful aesthetic of V19 Neo, we think you’re going to love this phone.

Which is the Best Phone?

Realme 7 Pro may be a new entry on this market segment, but it has dominated the competition already with its stacked spec sheet. Sure it doesn’t have the same 90Hz refresh rate of its predecessor, but neither its competitors. At this point, no should get the Galaxy A51 as the Galaxy M51 and M31 offer better value than it. In the case of V19 Neo, it may be sporting an aging chipset, but it’s still one of the best-looking mid-range devices.

You may always opt for either the Galaxy A51 or V19 Neo but, give credit where credit is due, Realme 7 Pro trumps the two older devices with its incredibly-fast 65W fast charging and Sony cameras sensors that get the job done in both day and night. There’s no other mid-range phone that can come close to it, whether it’s spec sheet, new features, or competitive price.