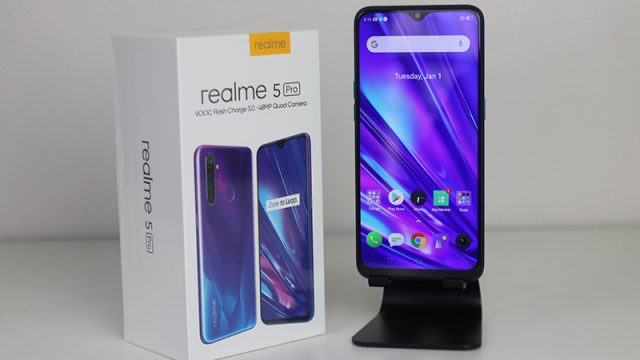 A quad-camera smartphone that will require no kidney to sell just to own one, here’s our Realme 5 Pro hands-on and first impression. Dubbed by Realme as Quad Camera Speedster, let’s take a look at at the specs, design, and the content of its retail box. 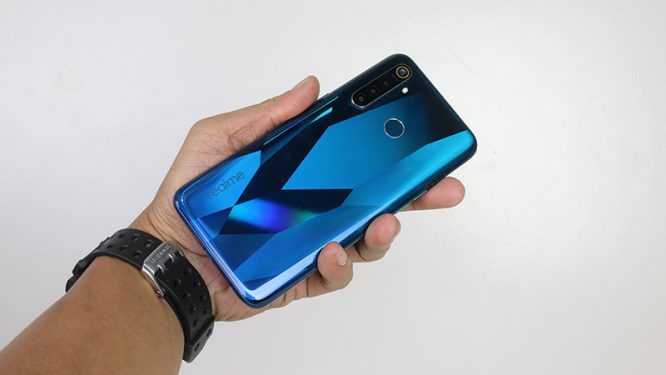 Starting with the display, you’ll immediately see that it has a teardrop notch and a thicker chin bezel. That said, it still managed to hit a 90.6% screen-to-body ratio. Additionally, the 6.3″ display is of IPS LCD that goes up to 450nits. It’s also a sharp display thanks to FHD+ resolution. Finally, there’s Corning Gorilla Glass 3 protection against scratches and with splash resistance.

As for the rest of the design, Realme is introducing a new crystal holographic design. The back design delivers quite a unique look, especially with its iridescent hue. It looks as if it’s a crystal sitting in the palm of your hand. That said, Realme 5 Pro leaves a good first impression despite realizing that the entire build is made of polycarbonate material.

Over to the right side is the power button while the left side locates the volume rocker and triple-SIM tray. Which means you can expand the internal storage of up to 256GB via microSD card. The rest of the ports can be seen on the bottom portion — a headphone jack, a USB Type-C port capable of 20W VOOC fast charging, and a speaker grille.

For an all-polycarbonate build, Realme 5 Pro feels hefty in the hand. It weighs 184g, so you will want to use a case on this budget beast. Spec-wise, there’s a Snapdragon 712 chipset here that’s more than enough for your gaming needs. Alongside that is a large 4035mAh battery. While the handset doesn’t come with an under-screen fingerprint scanner, we still appreciate the fast and accurate performance of capacitive scanner that’s beside the main cameras.

All About The Cameras

Speaking of cameras, it’s the quad-camera setup that’s really the main feature. The main sensor is of Sony 48MP f1.8 lens. It allows up to 4K @ 30fps video recording and 60fps under FHD. You can also choose between 120 and 960fps for your slo-mo options. We are also glad to report that electronic image stabilization is present here, as well as for the 16MP selfie camera. For the rest of the three sensors, you have an 8MP f2.2 ultrawide with barrel distortion correction, a 2MP portrait lens, and a 2MP macro lens that’s capable of 4cm shooting distance. Although a telephoto lens is missing here, the main camera can provide up to 10x digital zoom.

Realme hasn’t revealed yet the official Philippine price of Realme 5 Pro. But by retaining the all-polycarbonate build for better specs, it seems like the company plans to deliver a powerful budget mid-range phone.