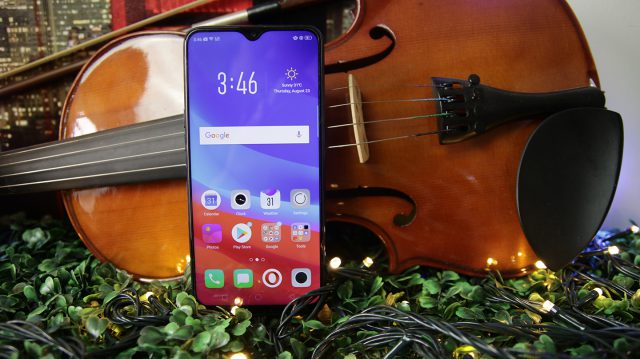 The OPPO F9 officially launched in the Philippines last week on August 15. It caused quite a hype online due to its VOOC flash charge technology that was said to provide two hours of talk time with just a 5-minute charge. Not only that, it’s also known for its slight twist on the display notch which is shaped like a water-drop.

Today, we’ll be reviewing the mentioned device and see if it’s worth the price tag.

Built with glass front and back weighing 169 grams, the OPPO F9 has a dimension measurement of 156.7 x 74 x 8 mm. Pretty standard as the smartphones released this year comes with huge sizes and tall screens.

Now going at the back, the OPPO’s trademark poly pattern back panel consists of the essentials such as the fingerprint scanner, dual camera setup with an LED Flash, company branding, and curved edges.

At the bottom, we’ll see the micro USB 2.0 charging port, speaker grille, microphone and the headphone jack. Meanwhile, physical and capacitive buttons are at the sides of the phone with the power button at the right whereas volume rockers, as well as the SIM tray, are at the left.

Upon using the phone in broad daylight, problems in regards with visual difficulty haven’t encountered while usage unless turned to the maximum level. Going to display settings, turning the brightness to the maximum level will give the user a warning with high power consumption. (Settings > Display & Brightness)

Also, you can customize your screen color temperature in depends on the environment and where your eyes are comfortable from cooler, default, and warmer. (Settings > Display & Brightness)

Night Shield option is also provided for those who like to read a lot using smartphone devices. This feature reduces the blue light from the screen to prevent its user from eye strain. (Settings > Display & Brightness > Night Shield)

The OPPO F9 sports a dual 16MP with f/1.8 aperture + 2MP with f/2.4 aperture, depth sensor paired with a 25MP with f/2.0 aperture. We’ll be testing how the smartphone will do in different lighting situations along with the features that came along with it.

Here we’ve captured different scenes and objects in a normal and super vivid mode. Obviously, it enhances the saturation of the colors and adds exposure to photo. As what we can see, OPPO F9’s rear camera is also good in taking details, especially on ambient lighting.

Going to this shot with the normal and super vivid mode, what we preferred this time is the one with normal as it captured color accuracy. The super vivid mode photo saturation, especially on trees, went too far that it didn’t look pleasing as it supposed it was.

Meanwhile, this photo’s super vivid mode wasn’t overdone unlike the photo above. The normal photo also clearly shows more details which may be because of the contrast as compared to the photo on the right side with more exposure and color saturation.

Aside from color saturation, it seems that it also adds a subtle vignette effect to the photo which can be seen in this example where Darth Vader chills beside the plants.

Going to the selfies, the beauty mode of OPPO F9 has obviously enhanced not just the subject’s skin but also added a little sparkle to her eyes. Unlike other OPPO smartphones, this mode didn’t look obvious that it was artificially enhanced which is a good thing for the front camera.

In this mode, the portrait did its job well to blur the background however, there are edges of the subject that haven’t read well by the AI which can be forgivable since it’s not a flagship phone. All in all, it still made the subject stand-out and shows the subject’s features and details clearly.

On low-light situation, the OPPO F9 proves its 25MP front-facing camera that it can still capture a clear photo on different lighting.

Lastly, we also tried the stickers and all were adorable and fun to try especially with your friends. Just like the beauty mode, it enhanced the subject as well by subtly making its skin whiter and soft.

The OPPO F9 is powered by MediaTek MT6771 Helio P60 coupled with Mali- G72 MP3 that carries 4GB/6GB of RAM paired with 64GB of internal storage that can be expanded up to 256GB via micro SD card. It also runs on Android 8.1 Oreo.

Unlocking the OPPO F9, enrolling our face and fingerprints are one of the basics in setting up the phone. What we observed here is that OPPO has added other options that add more control to the face unlock.

OPPO also added more security for the keyboard which pops out when you’re entering passwords/ passcode and personal information.

It’s also nice that OPPO is concerned with those who use phones while driving that they added Smart Driving option. With this, you can turn on the feature manually/ automatically. It detects that you’re in a car based on conditions such as Bluetooth and maps.

Efficiency seems to be one of OPPO priority as they added this feature so that users can multitask while watching videos on full screen.

Just like what we’ve seen in OPPO Find X, it also has the OPPO Game Space where the system improves for the better gaming experience.

Overall, upon using the OPPO F9 it was smooth in terms of gaming and web browsing. We were impressed by how fast the face recognition is even in low lighting situations. Using this phone for casual usages such as social media, web browsing, gaming, and photo shooting gives you not the best but decent and good mobile experience.

We tested the OPPO F9 with these benchmarking tools and here are the results:

The OPPO F9 is fueled by a 3,500mAh battery. As mentioned, one of its main highlights is its VOOC Flash Charge. It seems to do its job since it was able to charge the phone in less than an hour from 20% to 100%. The device can also last for more of a day of light usage.

Compared to its predecessor, the OPPO F9 was louder on maximum volume although the sound produced was not clear and ended up being scratchy. On medium volume, it wasn’t loud enough but the sound was clearer.

All in all, OPPO F9 is a smartphone with a good set of specs and features. It’s OPPO’s good contender in the upper-midrange smartphone category. Its interesting features such as the VOOC battery charging compensate some of its downsides including the struggle in focusing the subject in rear camera shooting that we encountered while testing its camera capabilities.
However, as compared to its predecessor, specs were just slightly improved so we think it’s not worthy to upgrade your phone yet. Also, there are a lot of other good smartphones released this year that’s why it’s recommended to look for other phone’s first that could give your preferred mobile experience.
What do you think of the latest OPPO F9? Tell us in the comment below!