Another midrange smartphone from OPPO was released this year boasting interesting specs and features dubbed as the OPPO F9.

This smartphone arrived in the country last week and is beginning to dominate the scene with their main selling point, VOOC Fast Charge that can give 2 hours talk-time in just 5 minutes of charging. Now, we were given a chance to test the unit.  Here are our first impressions of the OPPO F9.

The OPPO F9 comes with a white rectangular box with the brand name at the top and other sides of the box. In front, we’ll see the phone model and image. Meanwhile, other relevant information of the device is at the back of the box.

Upon opening the box, the first layer we’ll see is another box containing the silicon case and user guide. Underneath are the OPPO F9 and other essentials such as USB 2.0 cable, adapter, and earphones placed neatly.

The OPPO F9 has a dimension measurement of 156.7 x 74 x 8 mm that is built with glass front and back weighing 169 grams. At the back, is the OPPO’s trademark poly pattern back panel with the fingerprint scanner, dual camera setup with an LED Flash, company branding and curved edges. 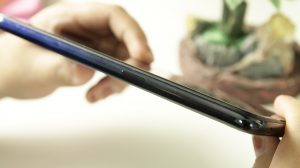 Moving on at the bottom, we’ll see the micro USB 2.0 charging port, speaker grille, microphone and the headphone jack. Meanwhile, physical and capacitive buttons are at the sides of the phone with the power button at the right whereas volume rockers, as well as the SIM tray, are at the left.

Overall, the design of the latest OPPO smartphone was what we expected for a 2018 midrange from the company. From the smartphone essentials, notch, and the gradient back panel color. There’s nothing to be excited about in terms of design except the waterdrop notch on the display.

Upon using the phone in broad daylight, problems in regards with visual difficulty haven’t encountered while usage unless turned to the maximum level. Going to display settings, turning the brightness to the maximum level will give the user a warning with high power consumption. (Settings > Display & Brightness)

Also, you can customize your screen color temperature in depends on the environment and where your eyes are comfortable from cooler, default, and warmer. (Settings > Display & Brightness)

Night Shield option is also provided for those who like to read a lot using smartphone devices. This feature reduces the blue light from the screen to prevent its user from eye strain. (Settings > Display & Brightness > Night Shield)

The OPPO F9 is powered by MediaTek MT6771 Helio P60 along with MediaTek MT6771Helio P60. It is packed with 4GB/6GB of RAM variants coupled with 64GB internal storage. The smartphone is fueled by 3500 mAh battery and runs on Android 8.1 Oreo.

Vivo NEX 3 Unboxing – Inside the future of smartphones