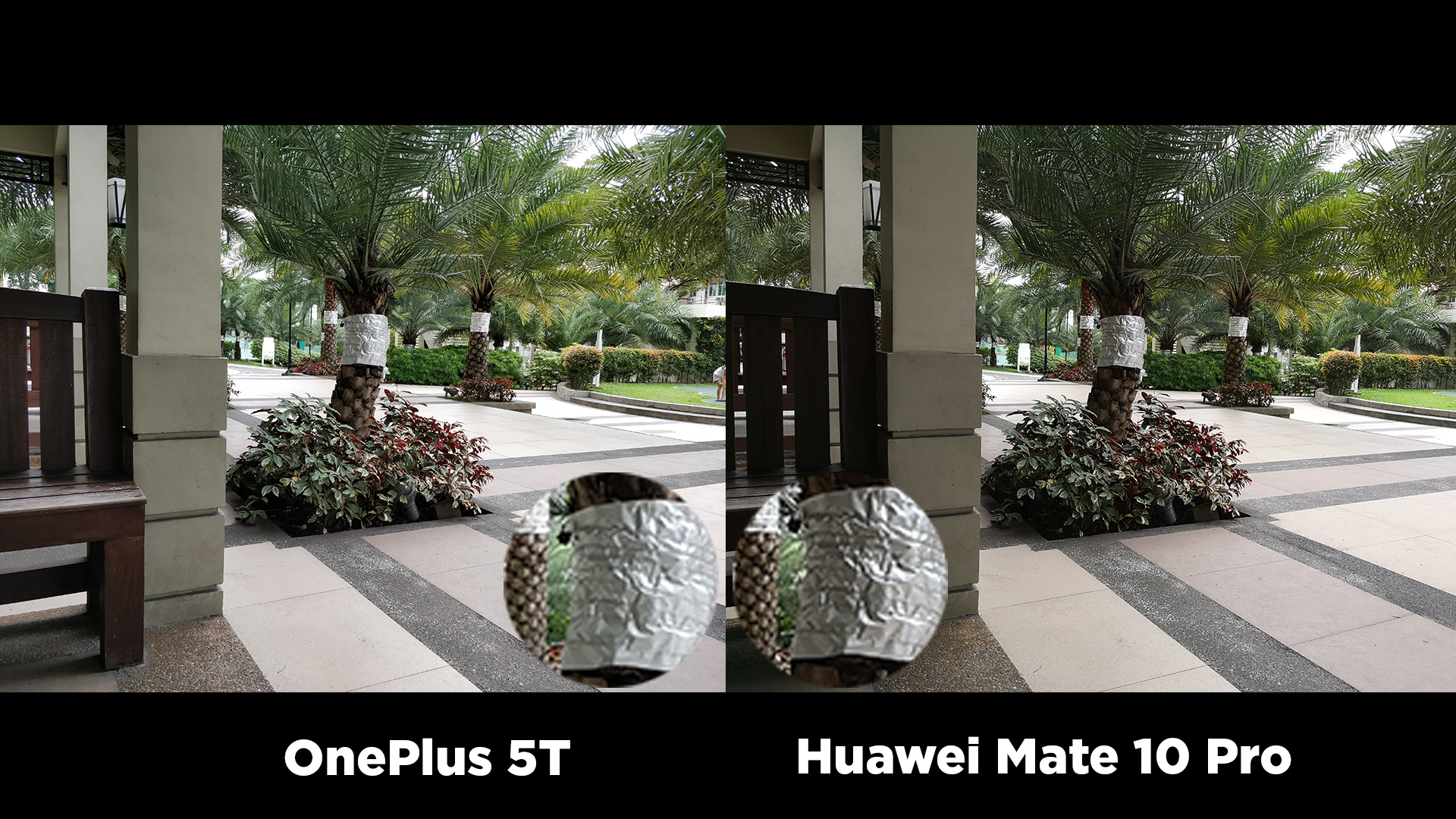 Today we have two performance heavy phones which we’ll see who will stand out when it comes to specs, camera and performance.

These all screen phones both have a front glass and an aluminum frame with a matte back finish for the OnePlus and a glossier back for the Huawei. Both phones also sport a dual-rear camera which also slightly protrudes at the back.

The finger print scanners are also at the same location which is becoming a trend not only for flagship spec smartphones. Surprisingly, the slightly thinner 5T is heavier than the bulkier Mate 10 Pro when held together.

Lastly, the lack of a headphone jack for the Huawei which the OnePlus still maintains.

Both phones have a 1080 x 2160p resolution with a 6” screen size with a very minimal difference on length. Panel types on the handsets are both AMOLED but with the 5T rocking an Optic AMOLED display.

Colors and detail sharpness are almost indistinguishable within the two especially with day-lit assisted shots, although the Mate 1o Pro might seem brighter on other shots.

Both phones also have a depth-effect feature which the OnePlus shows off better than the Huawei does.

One great rear-camera feature of the Mate 10 Pro is its ability to shoot high quality photos in monochrome without the need to edit it post-shot.

Night-shots also seem incomparable with the Mate 10 again showing more brighter results and also has a night-mode feature which helps with these scenarios.

Selfies look more realistic and color accurate on the OnePlus compared to the Huawei which removes some facial details and ultimately resulting in a whiter skin complexion.

The 5T also compensates better in low lighting and night-time selfies compared to the Huawei, which mixes lighting sources with the skin color.

Depth-effect on the front cameras only work for the Mate 10 Pro with a fairly recent result.

Both phones can record up to 4k at 30 fps, although stabilization on playbacks may result in some distorted outcome on both phones.

The OnePlus 5T is powered by a Qualcomm Snapdragon 835 while an in-house HiSilicon Kirin 970 chipset for the Huawei Mate 10 Pro. Using the following benchmarking tools, we received these results in the process:

And because both phones are with flagship specs, smooth framerates are expected although the Mate 10 Pro may seem to lack detail quality at high demanding games and tends to over heat like it’s cheaper variant the Mate 10.

Fingerprint scanners also work with a 10/10 performance with almost the same speed and no encountered errors.

Through our ManilaShaker Battery Rating, we can confirm the following overall lifespan of both devices:

When it comes to audio, the Huawei sounds louder to us compared to the OnePlus. Refer to the video and hear for yourselves.

Both the OnePlus 5T and the Huawei Mate 10 are available in local and online stores with the 5T retailing at $499 or at ₱24,990.00, while the Mate 10 Pro at $780 or at ₱38,990, although prices will differ in countries after taxes. So which performance heavy phone do you prefer to pick these up-coming holidays? Comment down below what you think.

Realme 5i vs OnePlus 7 Pro Camera Comparison – Budget vs Flagship