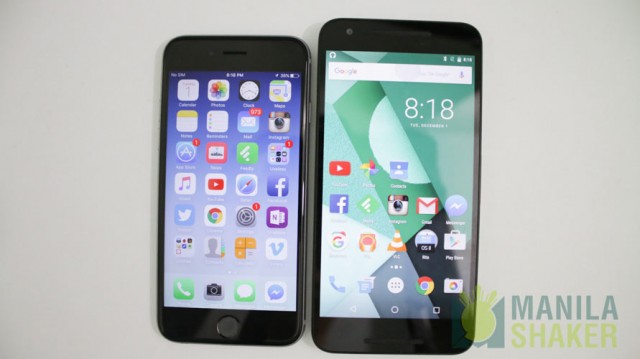 LG and Apple take the stage in this review comparison, as Apple’s current flagship, the iPhone 6s (priced at Php 35,880) takes on the budget-wise LG and Google Nexus 5X (priced at Php 18K). Check out their specs, features and prices and find out which among these two fits you best.

The iPhone 6s has a very appealing metallic unibody that is widely reminiscent of all the iPhones design, while the Nexus 5X’s design stands for a more simpler approach, focusing more in the utility of handling and gripping, with its polycarbonated body. Despite lacking in finesse, the Nexus 5X pays for it on its easy-to-handle exterior, though style-wise, the iPhone 6s’ metallic construction illuminates classiness and sophistication, expected on an iPhone. Both device features a fingerprint sensor, with the Nexus 5X’s sensor, located at the back, while the iPhone at the menu button. The iPhone offers a 3D force touch feature that is not seen on the Nexus 5X.

What do you prefer? The classier iPhone 6S or the handy dandy Nexus 5X? Share us your pick on the comments section.

The iPhone 6S carries around 4.7-inch IPS 750p HD display , while the Nexus 5X sports a 5.2-inch 1080p FHD display. Both devices we’re seen to be really close, in terms of quality and colour, though when it comes to viewing angles, the iPhone 6S was seen to be more adaptable than the Nexus 5X, while being able to still deliver a clearer display. However, the larger 5.2-inch display of the Nexus 5X brings out the quality of the Nexus 5X’s display, thanks to its larger screen.

Which among these two would you want to have? The 5.2-incher Nexus 5X or the viewing-wise iPhone 6S? Share your thoughts with us.

See also: Nexus 5X Review – One of the Androids I Wanna Buy

Both devices are carrying the same sensor pairing of 12MP rear shooter and 5MP selfie shooter, which only differentiates in overall capability. Quality-wise, the outputs of the Nexus 5X were seen to be very detail-oriented and accurate, while the Apple iPhone 6S delivered clear outputs on daylight.

For lowlight shooting, the Nexus 5X’s sleek noise control capability gets things done, with its excellent detail-wise outputs on lowlight and noise balancing capability, while night outputs for the iPhone 6s was seen to be grainy and poor.

For video, both shooters can shoot 4K UHD videos with ease and does the job handily.

What do you think of the Nexus 5X and iPhone 6s’ shooters? Hit us up on the comments section and share your thoughts.

The iPhone 6S has Apple’s latest self-made chip, the Apple A9 chip on its helm, while the Nexus 5X is carrying around a Qualcomm Snapdragon 808 hexa-core chip. Both device carries the same RAM capacity of 2GB, while they differ in options for ROM, with the iPhone 6S can either be 16, 64 or 128GB of ROM, while the Nexus 5X has 16GB or 32GB of ROM. For benchmark scores, the iPhone 6S was seen to dish out the better ratings between the pair.

Both the iPhone 6s and the Nexus 5X don’t support any microSD card expandability feature.

Audio-wise, these two was actually not that bad, however, the iPhone 6S delivered a more louder bass and overall better volume than the Nexus 5X. The iPhone 6S also delivered clear and distinct sound outputs, which was heard better with what the Nexus 5X has to offer.

Price-wise, the LG Nexus 5X, which is priced at $379 or at Php 18K, is the affordable take between the two, while the iPhone 6S, priced at Php 35,880, stays as the prestigious choice, however, performance-wise, they did have their strengths and advantages between one another, so it’ll actually depend on what you want to actually own.

Do you want the classy and widely known iPhone 6S? Or the utility budget Nexus phone, the Nexus 5X? Get your pick and settle it. To us, whatever you choose, both phones are completely worth it.

Also, check out this video comparison, starring none other than the iPhones 6S.