The future is apparently here — dual-screen laptop, that is. ASUS, at Computex, announced its ZenBook Pro Duo — a laptop bearing two displays featuring OLED and IPS panels. As absurd as that might sound, initial impressions are generally positive.

ASUS is really carving the path to the future as the ZenBook Pro Duo is unlike we’ve ever seen. The main highlight of the device are the displays — you have the clamshell display but with a 16:9 4K OLED panel, while the secondary display — found right where the keyboard usually rests — makes do with a 32:9 4K IPS panel, a.k.a. “ScreenPad Plus.”.

Due to the fact, the keyboard is tightly placed on the bottom part of the deck with a trackpad on its right side, à la ROG Zephyrus M. Apart from that, the ZenBook Pro Duo features up to octa-core Intel Core i9 CPU with Nvidia RTX 2060 GPU. As for port selection, there’s a Thunderbolt 3, full-sized HDMI, audio jack, and two USB-A.

The ScreenPad Plus’ Features

Now, back to the screen. The ScreenPad Plus offers a variety of functionalities, aside from sucking the juice out of the battery. First, it can act as a continuous vertical screen of the main display. Second, you can have it work as a normal extended display. Third, you can take advantage of ASUS’ exclusive software wherein it’ll allow you to open up to 3 apps side-by-side. 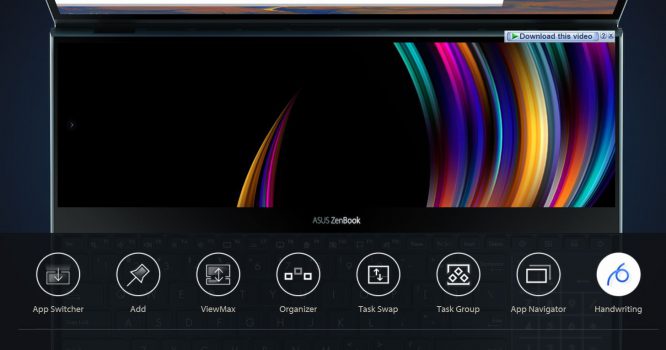 Due to the difference in panel technologies, the secondary screen appears duller in comparison. However, ASUS made it like that in order to reduce screen reflection on the main display.

If there’s a catch here, it’s the build. At 2.5kg, the ZenBook Pro Duo is a reasonably heavy laptop. And with two screens running simultaneously, expect the battery life to return average results.

Without much fanfare, ASUS also introduced the smaller sibling — the ZenBook Duo. This time, you’re dealing with a smaller chassis at 14-inch. You won’t find 4K OLED panel here, but you do get two 1080p IPS LCD displays. As for the specs, it supports up to Intel Core i7, an Nvidia MX250, and up to 16GB RAM.

There’s no official word yet about pricing and release date, however, we do expect the duo to come with hefty prices.