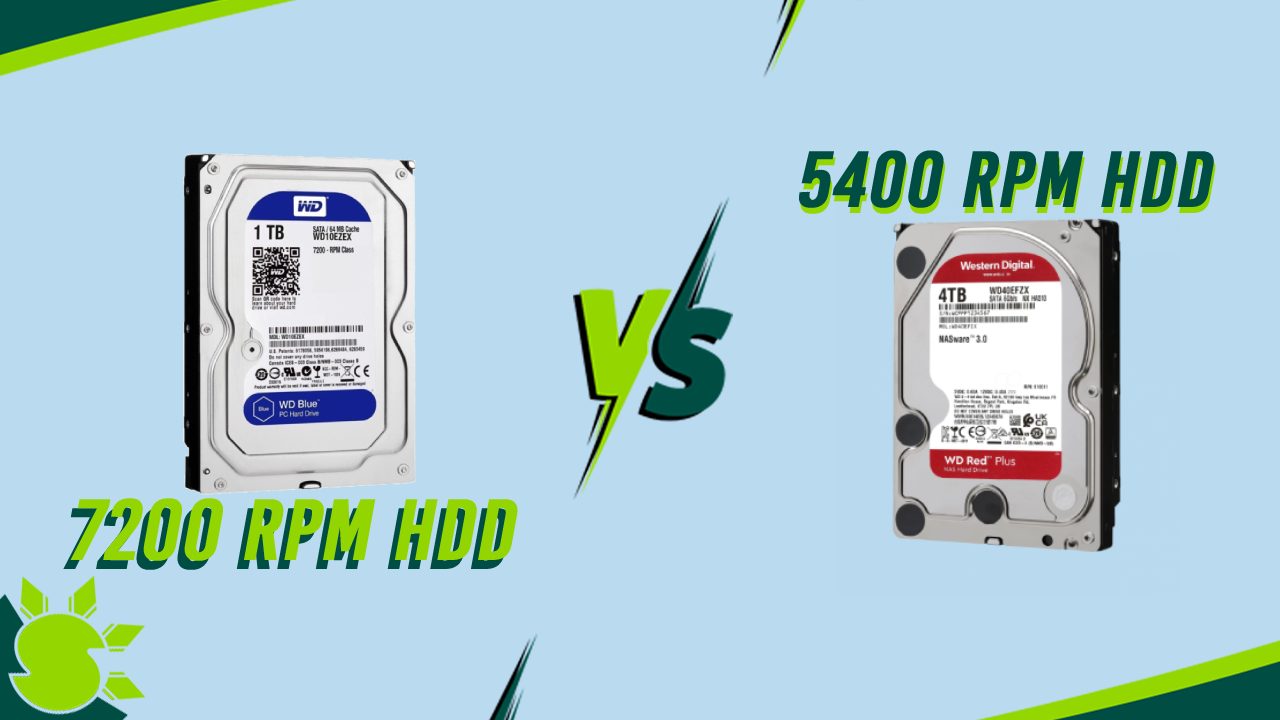 Users today choose SSDs over conventional hard drives due to improved performance, speed, and bandwidth. Nonetheless, if you want a bigger storage capacity at a low cost, an HDD is the way to go.

Despite hard drives with 12000 to 15000 RPM being widely available, ones with 5400 and 7200 RPM are more common among household users. While rotational speed is important, you should also consider areal density (the amount of storage per unit space) while installing a new HDD.

Furthermore, if you’re presently using a 5400, is it worthwhile to upgrade to a 7200? There is, without a doubt, much more to the difference than the 1800 RPM differential, and that is precisely what we shall discuss in this essay.

What does RPM mean in Hard Drives? An HDD is made up of a spinning platter (with a thin magnetic coating), read-write heads, and a motor spindle. It works by moving a head across the platter and reading/writing data in computer-readable language.

A circular platter, for example, has multiple small spots that may be magnetic or demagnetized. While smaller drives typically feature a single platter, larger drives might have numerous platters stacked on the motor spindle.

Surprisingly, the platters may rotate at hundreds to thousands of revolutions per minute (as low as 1200 and as high as 15000). That is exactly what Revolutions Per Minute (RPM) signify, and it also helps decide access time; the more revolutions, the faster the data retrieval.

SSDs, on the other hand, employ flash memory, which electrically stores, retrieves, and erases data. Data access is substantially faster without moving heads, which is why many prefer them over mechanical ones.

Moving on, a higher RPM HDD means that the read/write heads can access data considerably faster. As a result, it is apparent that your PC or laptop will not have to wait long for hard drive procedures. As a result, a 7200 RPM mechanical disk outperforms a 5200 mechanical disk. However, this does not imply you should automatically choose the former since there are certain distinctions that may persuade you otherwise.

To begin, 5400 RPM indicates that a hard drive’s platter rotates 5400 times per minute to execute read/write operations. We recommend utilizing them if you wish to run an operating system, store large data, and run low-end apps.

Furthermore, 5400 hard drives are recommended if you want to add extra storage to your PC, construct a low-power server, or NAS (Network Attached Storage). This is mostly because a slower drive (than 7200 RPM) typically consumes less power and generates less heat. They are also often used in laptops because of their mobility and heat dissipation needs.

7200 RPM hard drives have platters that rotate 7200 times per minute to execute read/write operations. Professionals typically favor them due to their exceptional speed and performance. Although the 7200 is often placed on desktop computers, it may also be used on laptops with adequate cooling performance.

Normal users may not notice much of a difference in performance between 5400 and 7200 RPMs. However, if you’re a professional or an ardent player, you’ll realize that the latter has a little advantage in several areas. If you test loading games on both, you’ll see that the waiting time in 7200 is far lower.

The data transfer rate is faster since modern hard drives have faster rotational speeds. Similarly, the read/write performance is improved, implying that data may be read and written from a storage device quicker than the 5400 mechanical disks. In fact, even when the areal densities of both HDDs are comparable, data transmission in the 7200 is 15% to 33% quicker.

Despite these benefits, you may encounter a few drawbacks with these hard drives, such as overheating, excessive noise, high cost, and so on. The following list of advantages and disadvantages should help you decide whether or not to purchase a 7200 RPM hard drive:

Before proceeding, it is vital to know that areal density, like RPM, plays an equal part in determining HDD performance. Essentially, as area density increases, the data on your hard disk gets more compact. As a result, the read-write heads can conduct read/write operations more faster.

In terms of data throughput, rotational delay, power consumption, heat generation, noise production, longevity, and cost, 7200 and 5400 RPMs vary. Without further ado, let’s dive into each of these aspects. Data throughput is simply the rate at which an HDD can perform read and write operations. In general, this is measured in GBps or MBps.
1 GBps = 1000 MBps in mathematics. 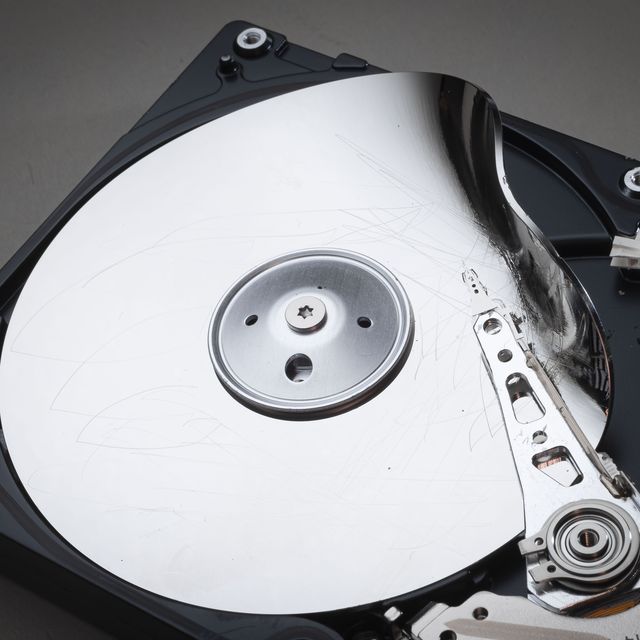 When performing a read/write operation, an HDD head must be properly positioned. This is known as seeking, and the delayed waiting time for the disk sector to reach the read/write head is known as rotational latency, also known as a rotational delay. Furthermore, this is measured in milliseconds.

Hard drives, like any other computer accessory, require electricity to function and conduct read/write activities. In reality, they must operate continuously and drain electricity even while idle. However, this varies according to the type of RPM.

In general, a 5400 hard disk uses 0.18 Watts when idle and 1.4 Watts when read/write operations are performed. A 7200 mechanical disk, on the other hand, may consume around 4 Watts while idle and at least 8 Watts when loaded.

As a result, if you want a storage device that uses less power, we recommend choosing a 5400 RPM. 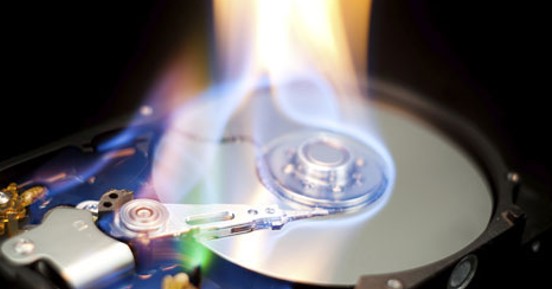 Excessive heating is a typical complaint among PC and laptop users. As a result, selecting the appropriate hard disk might assist prevent your system from overheating in the long term.

As previously stated, hard drives feature motor spindles that rotate circular platters. As a result, heat generation is visible, and the temperature can range from 0 to 70 degrees Celsius. However, this depends on a variety of criteria, including model, kind, and, shockingly, RPM.

Because the 7200 circles are significantly faster and consume more power, heat generation is very substantial. If you don’t want a continually hot PC or laptop, 5400 RPM is the way to go. When reading or writing data, hard drives make a clicking or chattering sound due to the presence of rotating elements. Although these noises indicate that your storage device is functioning properly, some of us may find them unpleasant.

Basically, the faster the revolutions, the more noise is produced. This simply implies that a 7200 RPM hard disk makes more noise than a 5400 RPM hard drive. Every hardware component has a lifespan and will eventually fail. As a result, most mechanical hard drives will fail within three to five years. In this regard, we have developed a separate tutorial for you on the six indicators your hard drive is failing.

The cost, however, varies according to the brand, model, and quantity of cache. Popular hard drive manufacturers include WD, Toshiba, Seagate, SanDisk, and others. Surprisingly, the price of one brand’s 7200 RPM drive is nearly identical to the price of another brand’s 5200 RPM drive. The Seagate Barracuda 2TB at 7200RPM and the Western Digital Blue 2TB at 5400RPM, for example, are both the same price.

Which One Should You Choose?

Switching from 5400 RPM to 7200 RPM will undoubtedly improve performance and speed. However, you should be prepared for increased power consumption, heat and noise generation, higher costs, and a shorter life expectancy.

If you’re already thinking about upgrading your storage system, we recommend going with an SSD. If you still prefer a mechanical hard drive, the comparative table below should help you determine which is superior.