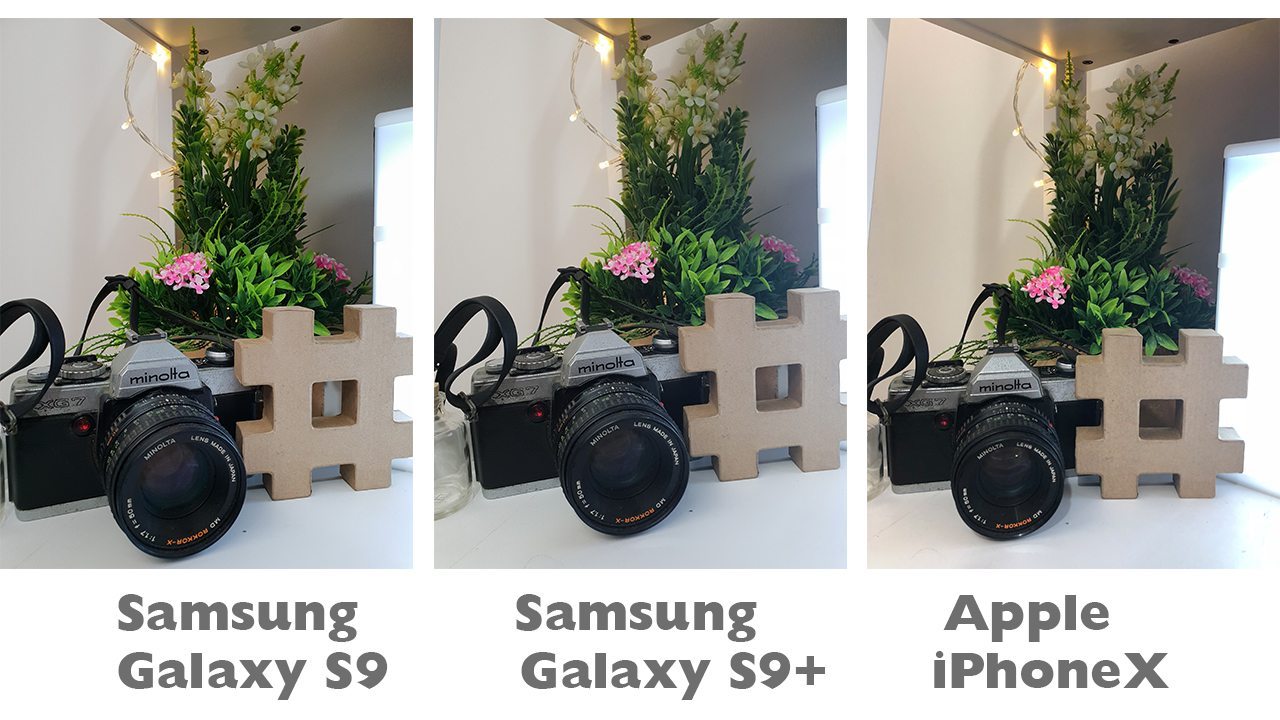 As Samsung released their two flagships last month, people are asking: Which flagship spec smartphone has the best camera? Now, we’re here to give you some sample shots for you to see which should you get as your camera smartphone. Here are the specs: 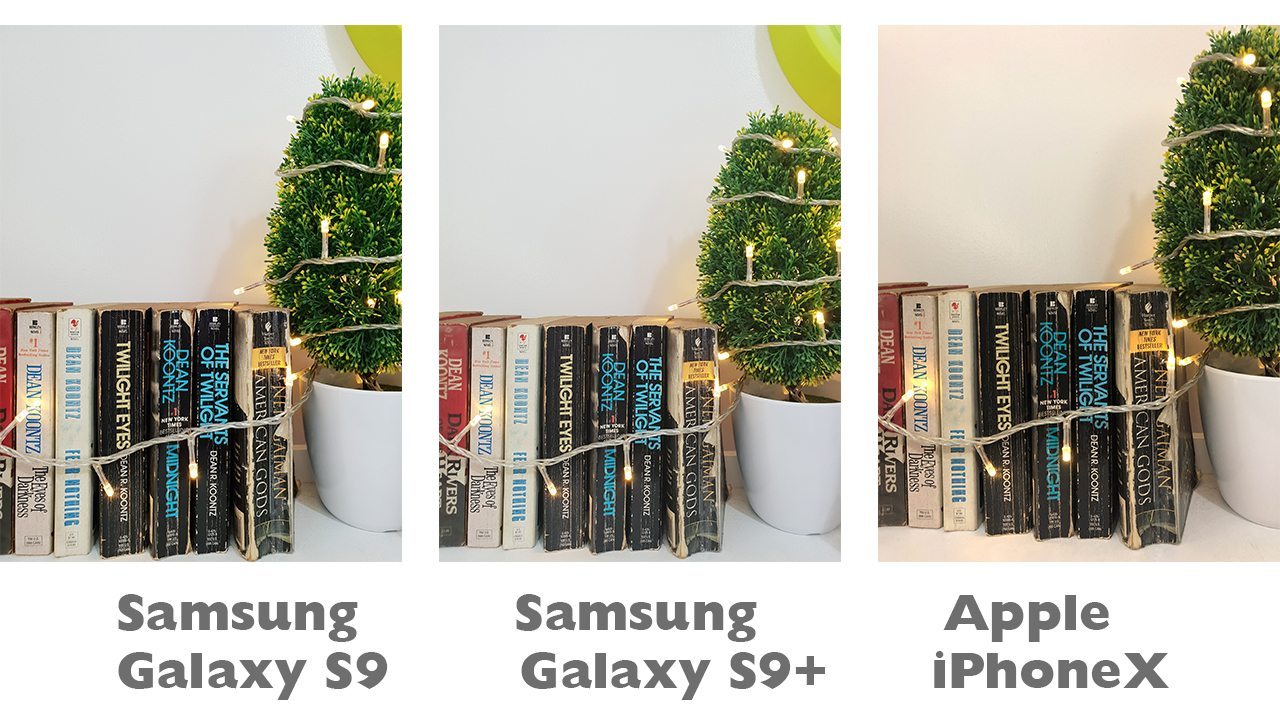 So, here are our first rear camera shots using the three flagship smartphones. The shots of the Galaxy S9 and S9 Plus look exactly alike at first glance. But when you switch your gaze to the iPhone X shot, you can easily identify the color difference. The wall on the two Samsung phones are white, it looks natural. However, the Apple shot looks a bit yellowish. The wall on the iPhone shot turned a little yellowish, not just that – the whole frame is a bit yellow and brown-ish.

If we focus our eyes on the green plant, the plant looks lighter and faded on the Galaxy S9+ shot, it turned the evergreen into a lighter tone, making it lose the sharpness of the green color.

Even the books on the Apple shot looked yellowish when the natural color of the second and third book is off-white.

On this shot, although the Apple’s shot again looks different from the other two smartphones as it leans on to an off-white-ish feel, the color difference isn’t as huge as the first shots.

Just like the first shots, the S9 looks faded than the two – making the green plant at the back looks lighter compared to the natural green plant on the S9 shot. Also, the plant looks darker on the Apple shot.

We turned on the HDR mode for these shots and even at a first glance, you can see that there are huge differences on three shots. The plant on the S9 shot looks very contrasted, the color green really popped out, even the lights on it looks brighter. Because of the contrast, the details on the plant and even the wires look really sharp.

Now on the second Samsung shot, the over-all frame looks darker than the latter, however, the green and black elements look faded. It even looks like it has been post-processed already.

The iPhone X shot varies in color representation as well. Just like the previous shots, the wall leaned on to a brown-ish tone. The green color of the plant on the iPhone X shot looks more vibrant and strong compared to the S9+ shot but the base S9 shot still gets the most contrast and vibrancy. What do you think? 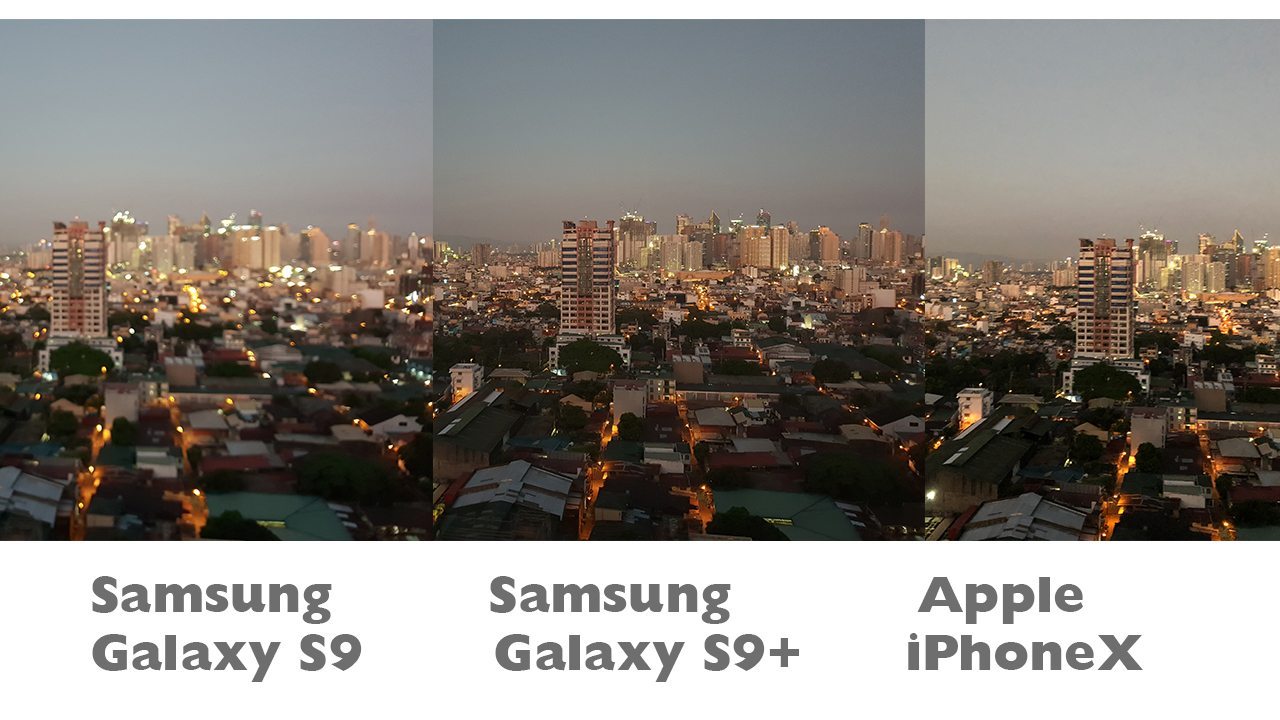 On these shots, the S9+ shot looks the most different. The S9 and the iPhone X even looked alike. The sky on both the S9 and iPhone X shots look very similar, but when you take a closer look, the buildings look darker on the iPhone X.

The Samsung S9+ shot is very different compared to the other shots. The over-all frame of the S9 looks darker, even the sky looks dark grey. 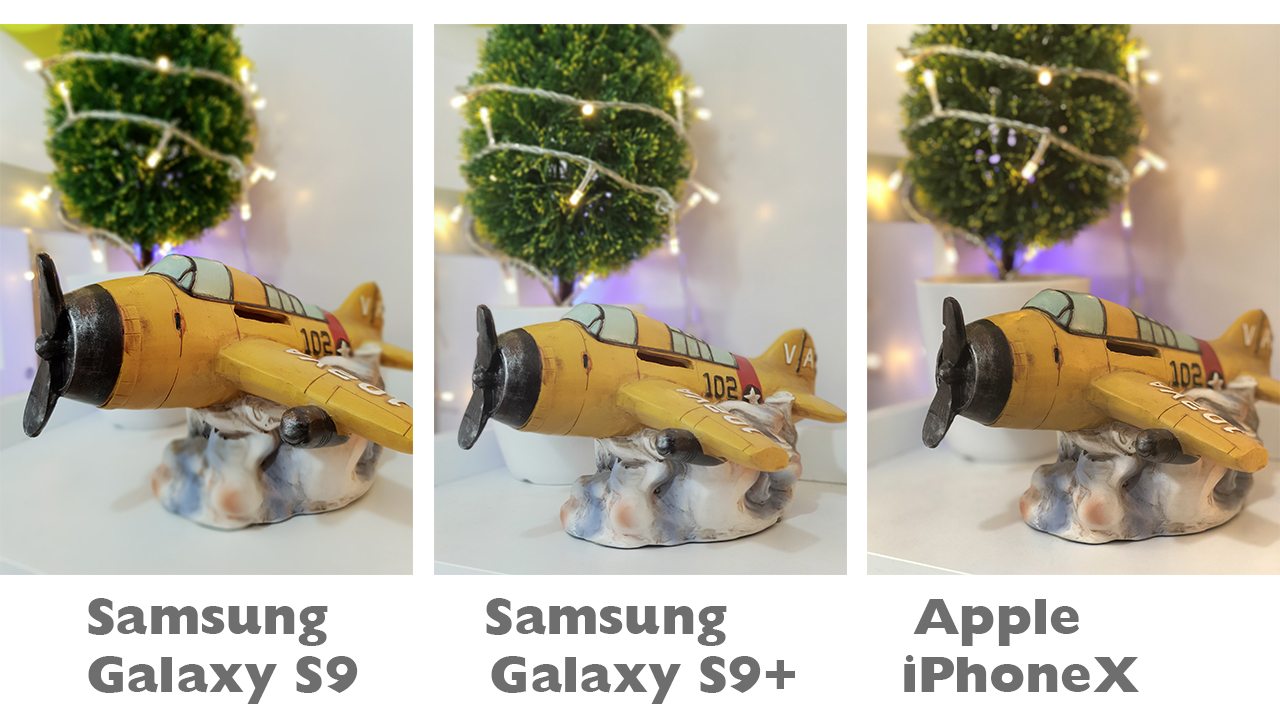 We turned on the portrait mode on these shots. The bokeh effect on these smartphones are really amazing. The blurred background doesn’t look artificial in any way. The most blurred background of all three is the iPhone X shot, though we want to inform you that it was a little hard when taking portrait shots on this iPhone. We even had approximately 4 trial shots before we achieved this wonderfully looking portrait photo.

It was actually also hard to take portrait shots on the S9 plus, we also took 2 trial shots before we got this result. The portrait mode on the S9, however, works swiftly.

When it comes to color representation, it’s similar to the previous shots. The iPhone X still differs in color – leaning on to a yellowish/off-white color tone.

The three smartphones can take photos with amazing bokeh effect but differ in how you take them. We didn’t have problems taking the S9 shot. We had to take one to two steps away to enable the portrait mode on the S9+.

To take bokeh effect shots on the iPhone X, we had to take several steps backward for the portrait mode to enable, we even took 3-4 shots before we were able to capture the right shot. 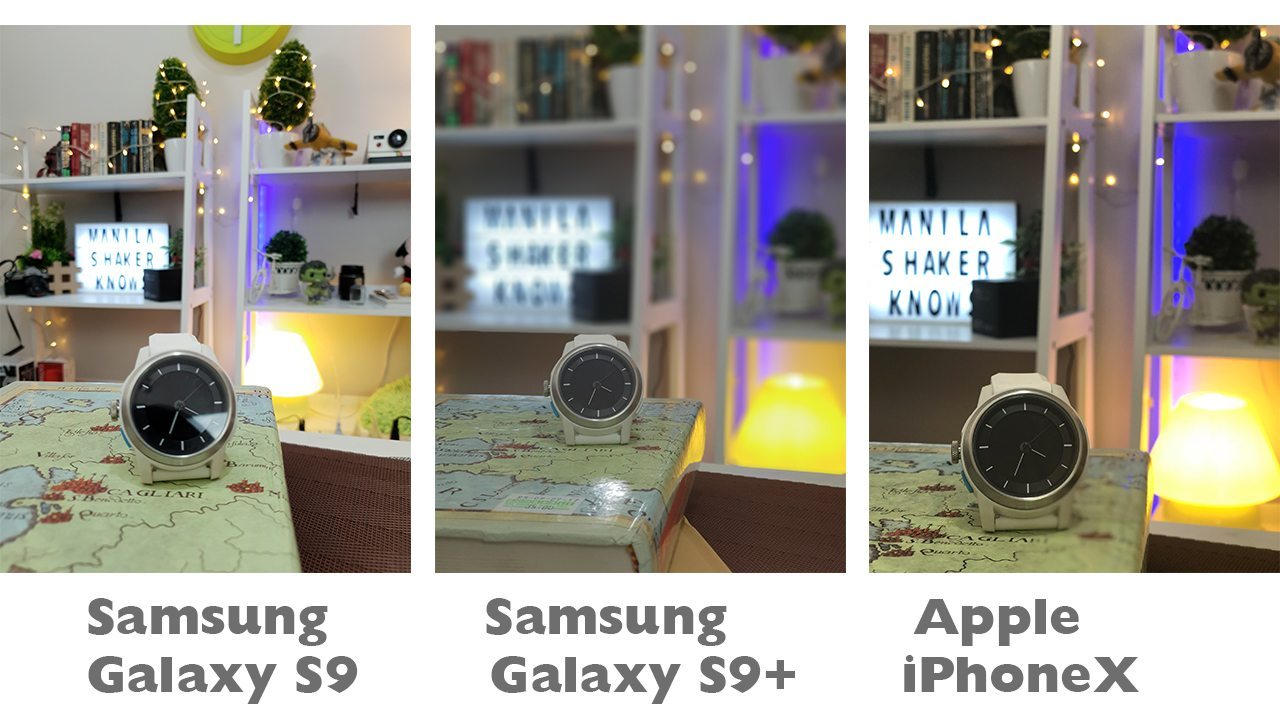 The most blurred background shot on these smartphones is from the S9+, the faded tone of this shot is very imminent as well.

Our first night-lit assisted shots look very different from each other. The more natural result comes from the S9 shot. The Galaxy S9+ shot looks faded, similar to the previous shots. While the shot using the iPhone X looks the darkest.

The S9 shot looks bright and vibrant that we can see the details of the frame, violin, and even the grass. The shot using the S9 Plus, however, looks brighter than the latter but faded. The light on the blue LED strip scattered on the whole frame, making the over-all photo looked bluish. On top of that, we can’t see the details on the frame, violin, and the grass because of the faded tone.

Obviously, the iPhone X shot looks the darkest of all three, to the point that the details on the violin, frame, and aren’t visible anymore. 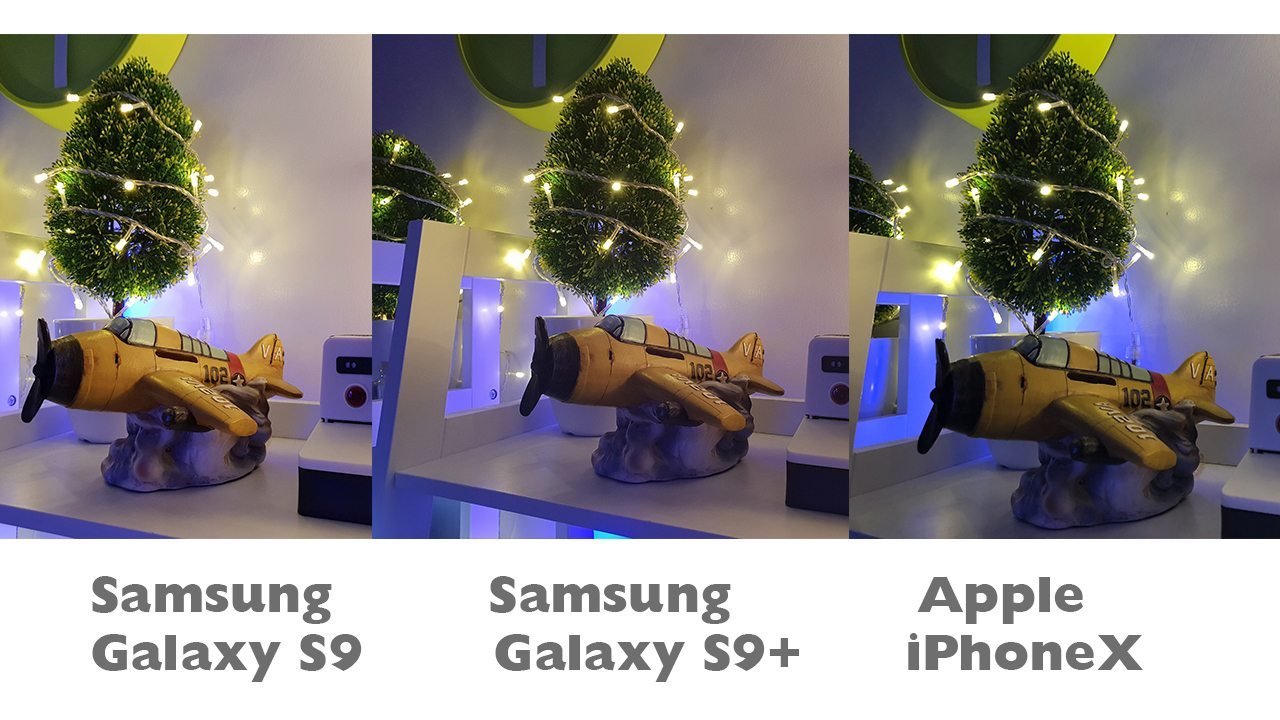 The brightest shot on all three is the on taken using the Samsung Galaxy S9. As usual, the S9+ shot looks faded and the iPhone X as the darkest. Even the violet LED at the back looks blue on the iPhone X shot. 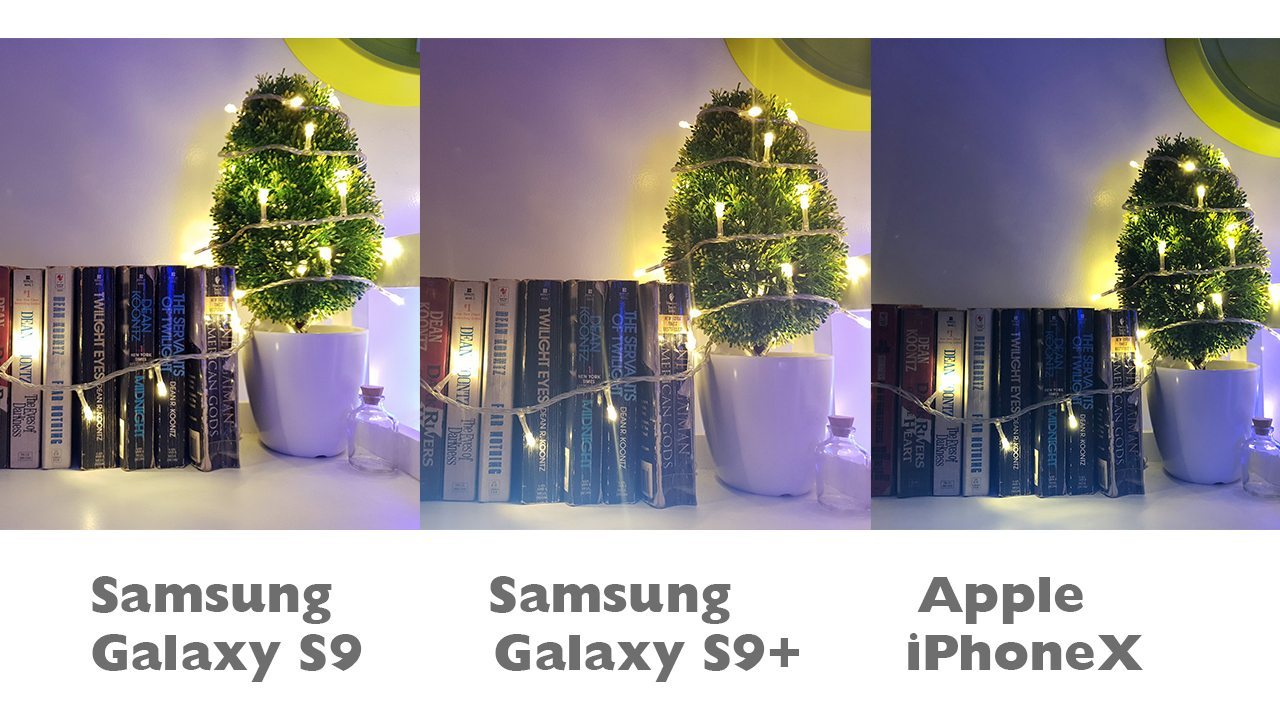 The first shot looks like it has been post-processed already because of the contrasted result. The wall on the iPhone X shot looks  bluish while the wall on both Samsung phones leaned on to a purple tone, though the brighter result is from the S9. 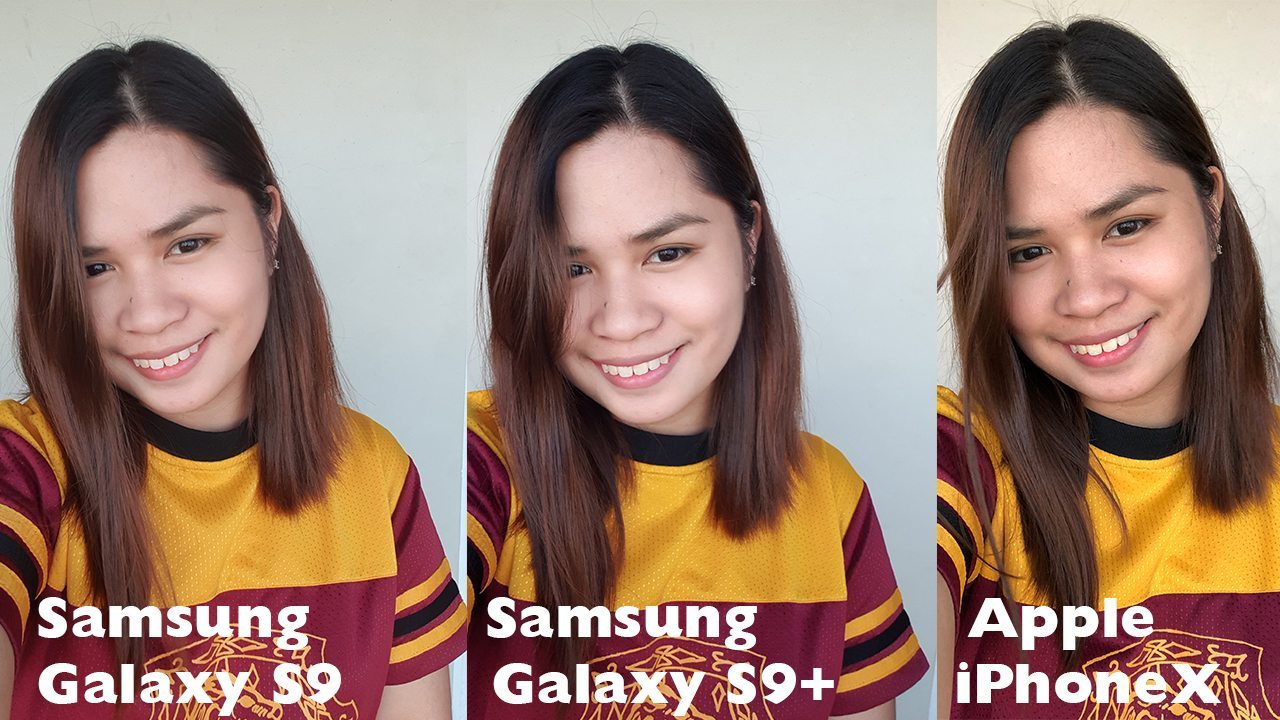 The selfie shot from the S9+ looks the brightest, and the darkest on the iPhone X. Although the three shots differ in color representation, the skin tone on each shot looks fair from the face down to the neck area.

The portrait mode on these shots were turned on. The boke effect on all three doesn’t look artificial at all, also, the color looks more natural on the iPhone X. Same with the previous bokeh effect samples, the blurred background on the iphone X shot looks the strongest. However, I would say that I like the selfie shots taken using the Samsung smartphones. 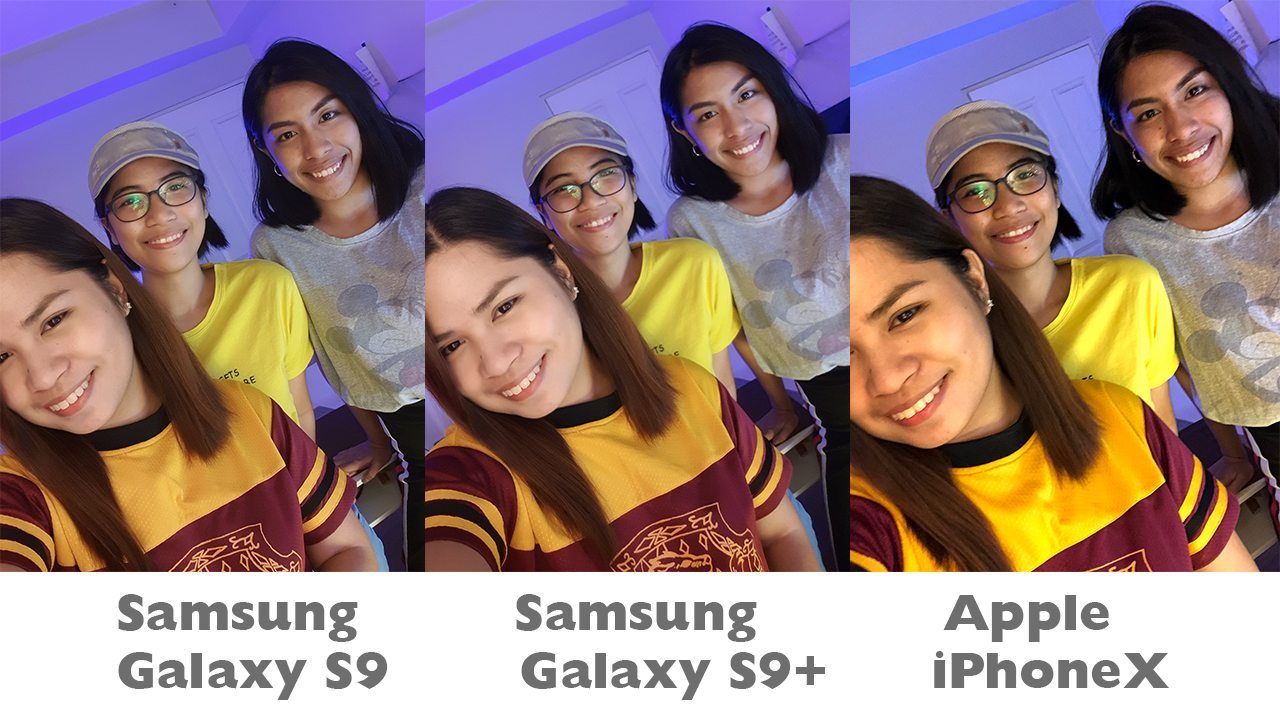 We took the selfie in front of a yellow lamp and the iPhone X shot captured the natural light of the lamp. The shots using the Samsung smartphones turned the yellow light from the lamp to white. Well, they changed the color for the better in our opinion. But if you want the more natural looking shot, you’d go for the iPhone shot.

Which selfie from the flagship spec smartphones is your pick? 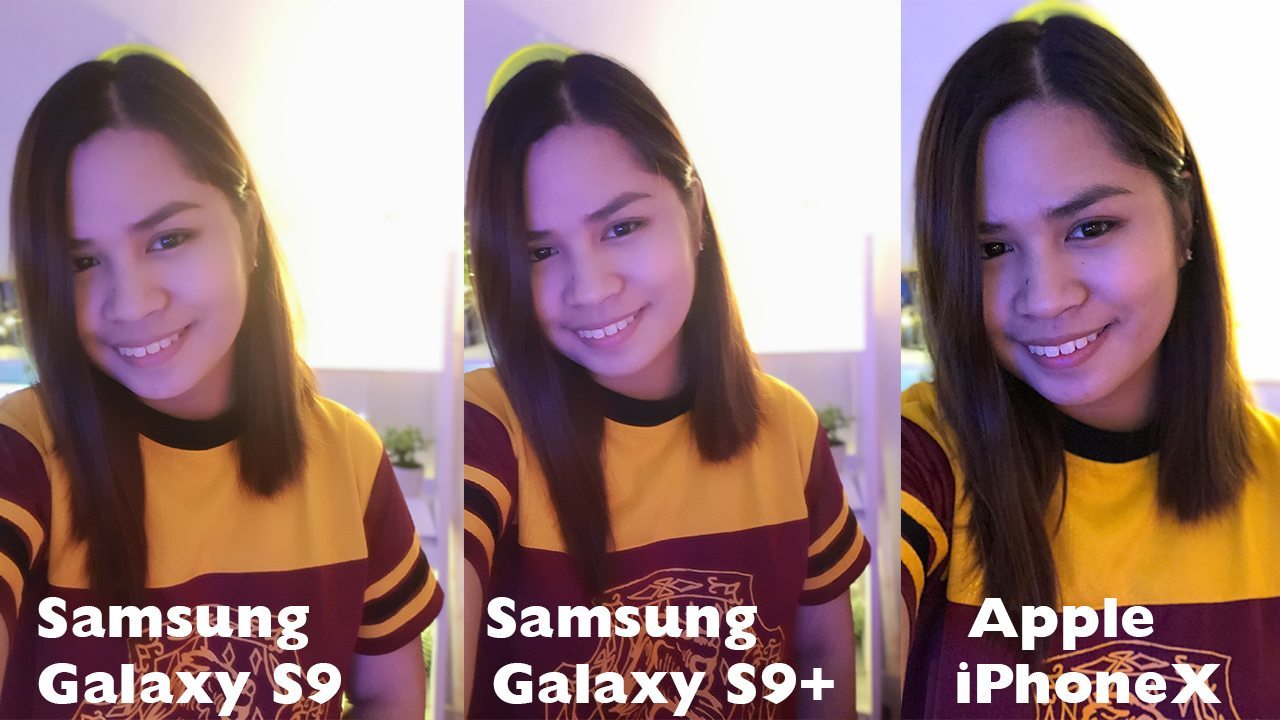 The dark selfie shot on these three is from the iPhone X. Even the hair and the eyebrows look darker. While the other two selfies looks bright and identical.

All handsets are capable of recording up to 4k resolution at 30 fps. Also, these three phones can shoot amazing super slow-mo videos. Check on the video embedded.

And oh, we also found this great looking case for the Samsung Galaxy S9!

After laying out the results on all three, which flagship spec camera smartphone is the best for you? Price greatly varies with the three, but are you getting the result that you paid for? Comment down below what you think.