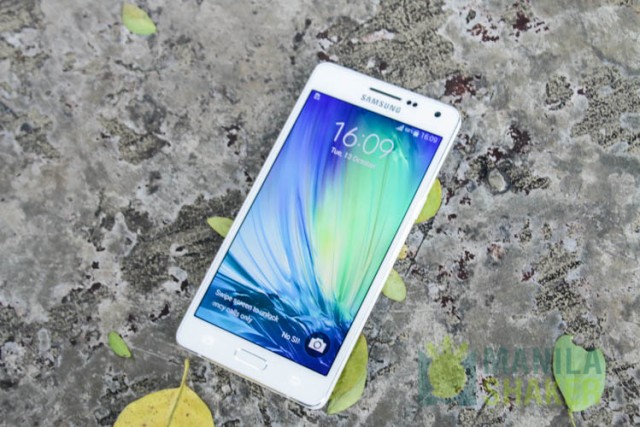 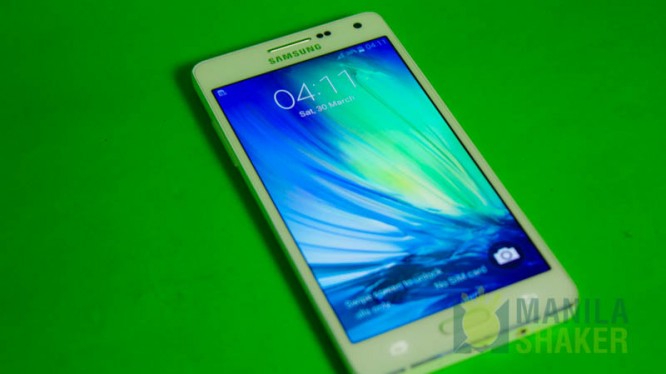 The Samsung Galaxy A5’s design was pretty sophisticated and adorable at the same time. The white LTE variant that we had in our possession showcased a really finesse-like feel. First impression designs truth be told is pretty reminiscent of the iPhone series, which is okay overall. The latter offers a few colour variants that should hit somebody’s taste, although seeing the pearl white’s elegant and snow-flake like design was all we needed to see on the device.

For handling, the product felt really good, despite being a 5-incher, the device felt really light and controllable, i didn’t showcase any trouble in handling. the polycarbonate matte cover was actually very comfortable in the hands and provides a very easy-to-grip feel into the device, which makes us what to hold it a lot. Button-wise, the device has 3 live physical buttons in hand, specifically for the volume rocker, the menu button and the power button. As mentioned before, the Samsung Galaxy A5 had an iPhone-like feel into, namely because of its boxy body shape, which actually adds up to the devices elegance and sophisticated, which may make one confused if the device is something plastic-made or metal made.

For feature positioning, the Galaxy A5 was pretty simple and straight to the point. On the front of the device is its 5-inch screen, while on the upper right is where the front-facing sensor is conveniently located, together with the Samsung trademark logo and the listening air gap. Below the screen is its live menu button and 2 on-touch buttons for cancellation and window.

The more interesting feature positioning is clearly seen more on the device’s back, since its flash, 13MP camera and speaker are all located in the middle upper part of the device’s back, which to us, felt like it was way to crammed in terms of positioning. Also at the back is its non-removable 2300mAh battery, which is probably one of the biggest drawbacks of the device, since the latter had a polycarbonated back, though it doesn’t have a removable battery.

Samsung’s Super AMOLED display is still unparalleled by all means. Its quality is still top notch and was still clear. But one thing that we noticed is its not-so-bright screen, which we felt could have been a little more stronger in terms of brightness level. The 5-inch 720p HD display, which has 294 ppi delivered incredible clear and quality-wise colours, which we praised it outmost.

Though, despite with a few superiorities, thanks to the Super AMOLED lcd, the Galaxy A5 could not escape the few drawbacks of AMOLED screens, which showcases excellent output on low or dim lighting, but is shredded by natural or bright lighting, although in terms of contrast, the Galaxy A5 still goes for the goal and perfectly executes the display imagery.

By watching a few videos and playing a few games, we were able to determine that they were sudden dimness-like scenario that we experienced, while watching and playing with the Galaxy A5. It felt as if brightness power or level was getting a bit low and things became a bit dim, especially on the backlight, when in idle. Though, despite getting these few troubles in the brightness department, the Galaxy A5’s still triumphs in the quality-department, thanks to its super AMOLED lcd display.

For camera, the Galaxy A5 packs a pretty vanilla-like 13MP rear shooter and a 5MP front facing shooter, which can also deliver a 1080p video quality recorder. Despite being a bit normal, the Galaxy A5’s shooter was actually satisfactorily speedy, which was entirely unexpected of the device. And the outputs were terrifically not that bad either, solid color blending and exposure, but gets a bit grainy on dim light. For its video shooter, the video felt rather unappreciative in terms of video exposure, since we were getting outputs that felt a bit lacking in accurate exposure and strong contrast.

Overall camera experience on the device was extremely satisfying and Samsung’s shooters have been considerably good with the A-series, similar to the A5’s big brother, the Galaxy A8. Truth be told, the Galaxy A5 might not be the best shooter around, but it sure can be a reliable source of good shooting outputs when in hand.

The Galaxy A5 carries a not-so-up-to-date Android 4.4, which is relatively reasonable, since the device was launched on the end of 2014, which explains a bit as to why, the device lacks a few necessary new things in its software.

The device offers a few tricks on sleeves however, such as the two-window view, which helps you open apps and use them at the same time via two-way view. The Galaxy A5 has a lot of google applications to help you get on track, with your google transactions, either via your Gmail or via purchasing things in the play store. The latter also features the typical Galaxy App place, where you can use Samsung Galaxy-made applications, such as updates on Fox news or even the DroidGOX widget. Like any typical Galaxy device, the latter features live touch-reactive wallpapers, which was actually a bit fun to play around.

It would have been really helpful, if the device is gonna receive a few updates onwards to higher versions of Android, though the classic version of the Galaxy A5 is expected to be updated to the Lollipop version, the DUOS version remains as it is.

Ironically, the Samsung Galaxy A5 wasn’t equipped with Samsung’s home-brewed Exynos chip, but rather a Qualcomm Snapdragon 410 SoC, backed up with 2GB of RAM with 16GB of internal storage and a microSD expandability limit of 64GB, which isn’t necessarily a bad thing, but would have been much more improved. The Exynos chip could have helped the device to a bit more consistency with the Samsung system, but having a a third-party chip, equipping your device, it seems that Samsung isn’t showing much love to its A-series, in comparison to its other know series, such as the S-series.

Despite this minor difference, overall experience in gaming, video recording, video viewing and web browsing was pretty acceptable to say the least. Good performance overall, though we felt a few lag, while playing subway surfers, which truth be told is a very laggy game, so we let the Galaxy A5 go with that particular issue.

The Galaxy A5’s speaker is a bit tricky to evaluate, since we listened to a few songs on it, it felt like the volume was kinda low, but when we switched to a different music, we were shocked to hear it a bit more loader. This could probably just be the MP3 itself, or they’re good be an overall issue on the device itself, Nevertheless, the Galaxy A5’s speaker delivered some very poor music quality, which gave out tinny sound outputs, so all-in-all, the speaker is probably the device’s major drawback.

The Galaxy A5 has a 2300mAh battery, which is in the range of average.Battery longevity felt like it was longer than 2300mAh though. We used the device continuously thoroughout the days we had the device and it was actually doing good, when it comes to battery life. Unofficial battery life is expected to be around 5 hours, more or less, which isn’t exactly long to be honest, but for a typical user, who mainly focuses in web browsing and texting, its something that’ll do.

Overall, the Galaxy A5 delivered a pretty good performance overall, though it felt like the device wasn’t worth its price of Php 12,880. I mean you could argue that the phone is Samsung and its top notch, but it felt like you can get better higher-end devices for the same price, and besides they’re actually more affordable Samsung phones in the market, that might fit your budget a little bit better. We’re not exactly saying that the Galaxy A5 is a bad phone, truth be told its awesome, but for 12 grand, not exactly.

What we liked on Samsung’s Galaxy A5

Please leave your comments and suggestions on the comments section below and share us your thoughts on the Samsung Galaxy A5. We highly appreciate all feedbacks from you guys.