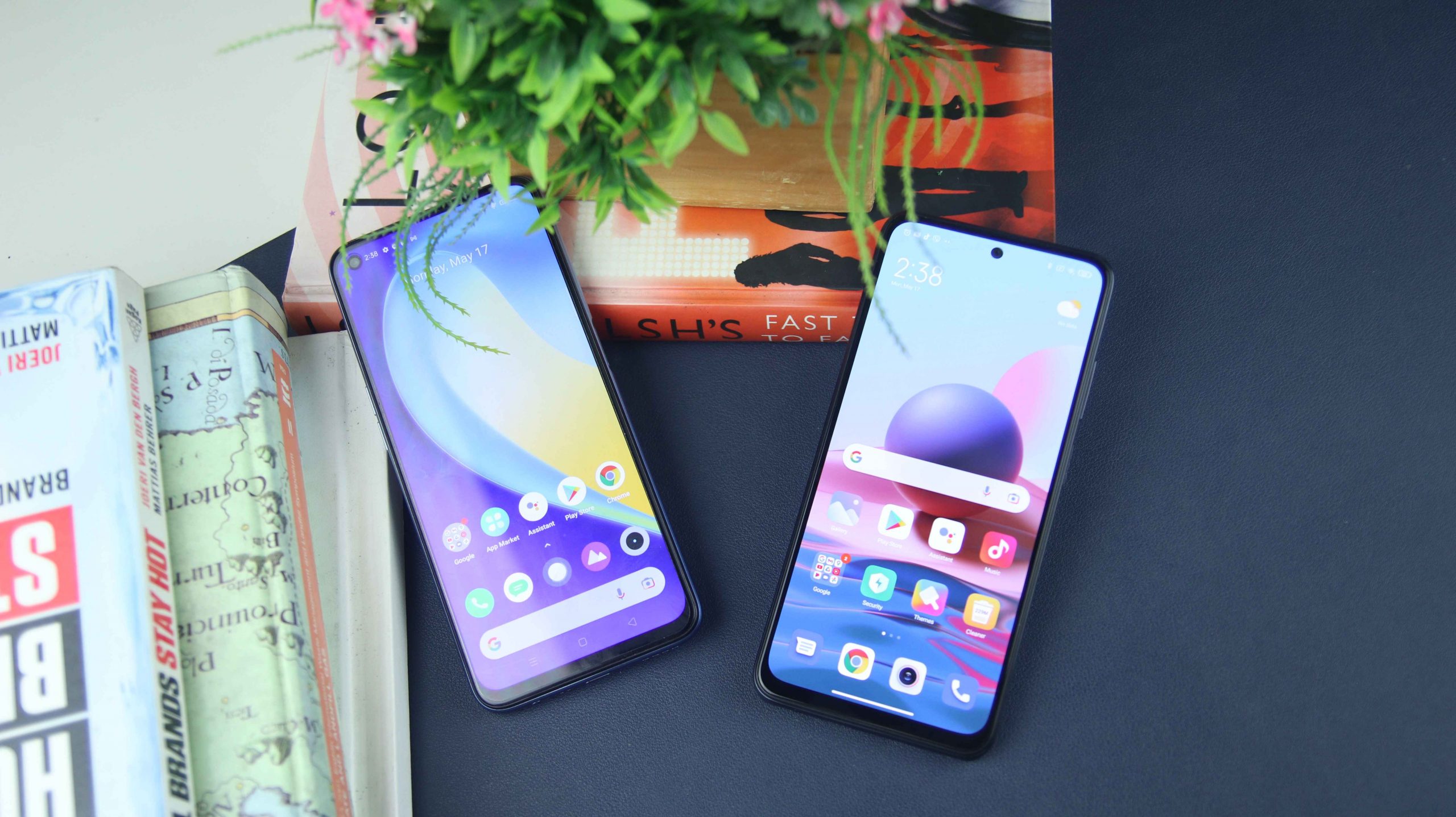 Redmi Note 10 broke the expectation of everyone when it launched as the most affordable AMOLED phone you could get. The 6/128GB variant costs ₱9,990 while the 4/64GB only retails for ₱8,490. At that price point, you might start wanting better cameras and faster display. realme 7 with 90Hz display and 64MP quad-cameras looks like a nice step up, albeit spending ₱11,990. So in this comparison, we’re going to check whether the upgrade in features is worth the price tag. 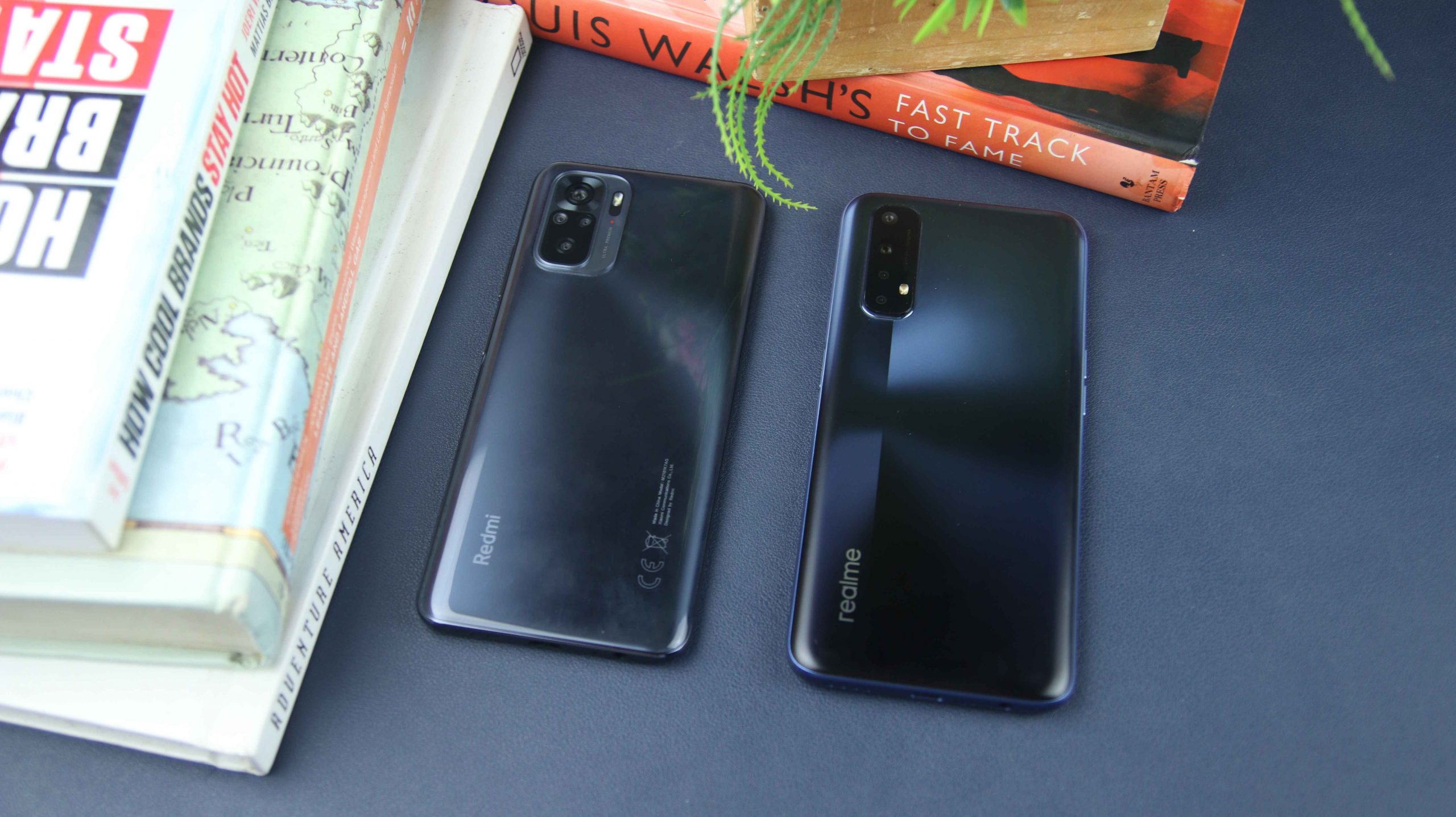 Although both have a polycarbonate build, Realme 7 has a smooth and metallic look, thanks to its two-tone finish on the back. The Redmi Note 10 with a glossy finish looks more striking, especially with its Lake Green paint job. While both are attractive in their own ways, the Redmi Note 10 just looks newer and more premium with its newer outfit and updated camera module.

With phones nowadays getting heavier, we were surprised with the Redmi Note 10’s 178g weight. It feels light in the hand as opposed to the brick-like size of the heftier yet solid Realme 7 that clocks in at 196g.

Both are sporting fingerprint scanners embedded onto their power buttons – this is despite the Redmi Note 10 sporting a Super AMOLED display – more on that later. The volume rocker of the Redmi Note 10 is on the right side, while the realme 7 has it on its left. Both support a dual-nano sim slot with a dedicated slot for MicroSD, which is expandable up to 256GB.

Both are sporting USB-C ports and audio jacks, but the Redmi Note 10 has an IR blaster advantage that supports remote control of appliances –another advantage of the Redmi even with its more affordable price.

realme 7 is way past its heyday and its again look isn’t helping it in this comparison. We just have to give to Redmi Note 10, delivering the winning blow with its updated design and lighter build.

As for their display, realme 7 is slightly larger at 6.5-inch with a faster IPS LCD 90Hz refresh rate. On the other hand, the Redmi Note 10 is using a 6.43-inch Super AMOLED at 60Hz, but with an incredible peak brightness of 1100 nits. It means it’s twice as bright as the realme 7 when watching HDR-certified videos while being punchier in color and contrast. Moreover, the picture quality will look better on Redmi Note 10’s Super AMOLED than the LCD on realme 7.

You can also save more battery due to the absence of backlighting.

In terms of display and design, the Redmi Note 10 is clearly superior in this comparison. However, we won’t blame you if you prefer the faster screen of realme 7, especially if you want to get that competitive edge.

On to the cameras — both have a quad-camera setup, featuring 8MP ultrawide and a pair of 2MP sensor for macro and depth. The only difference is that the Redmi Note 10 is using a 48MP main sensor while realme 7 is using a bigger 64MP sensor. But does not mean the larger the sensor the better the output. 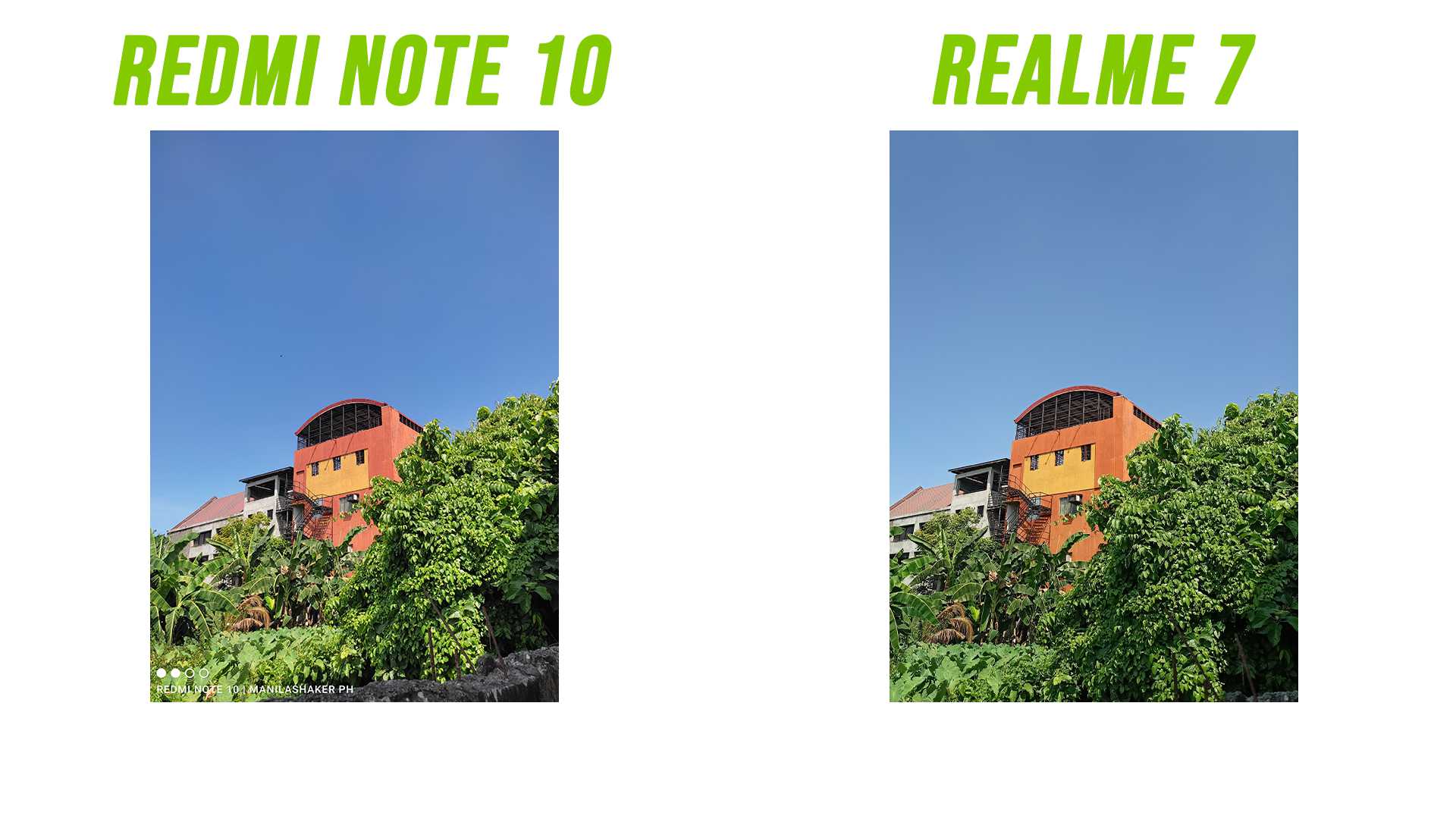 Switching to ultrawide, both phones continue to trade blows — with realme 7 delivering a balanced dynamic range and accurate white balance and the Redmi Note 10 showing a natural-looking shot.

Taking photos in low light, they both output images with some noise and grain that’s pretty normal at their price range.

But with Night Mode, it’s where the Redmi Note 10 trumps the realme 7. The former shooter takes brighter and faster night shots compared to the older realme 7. This is a big convenience for the Redmi camera phone. 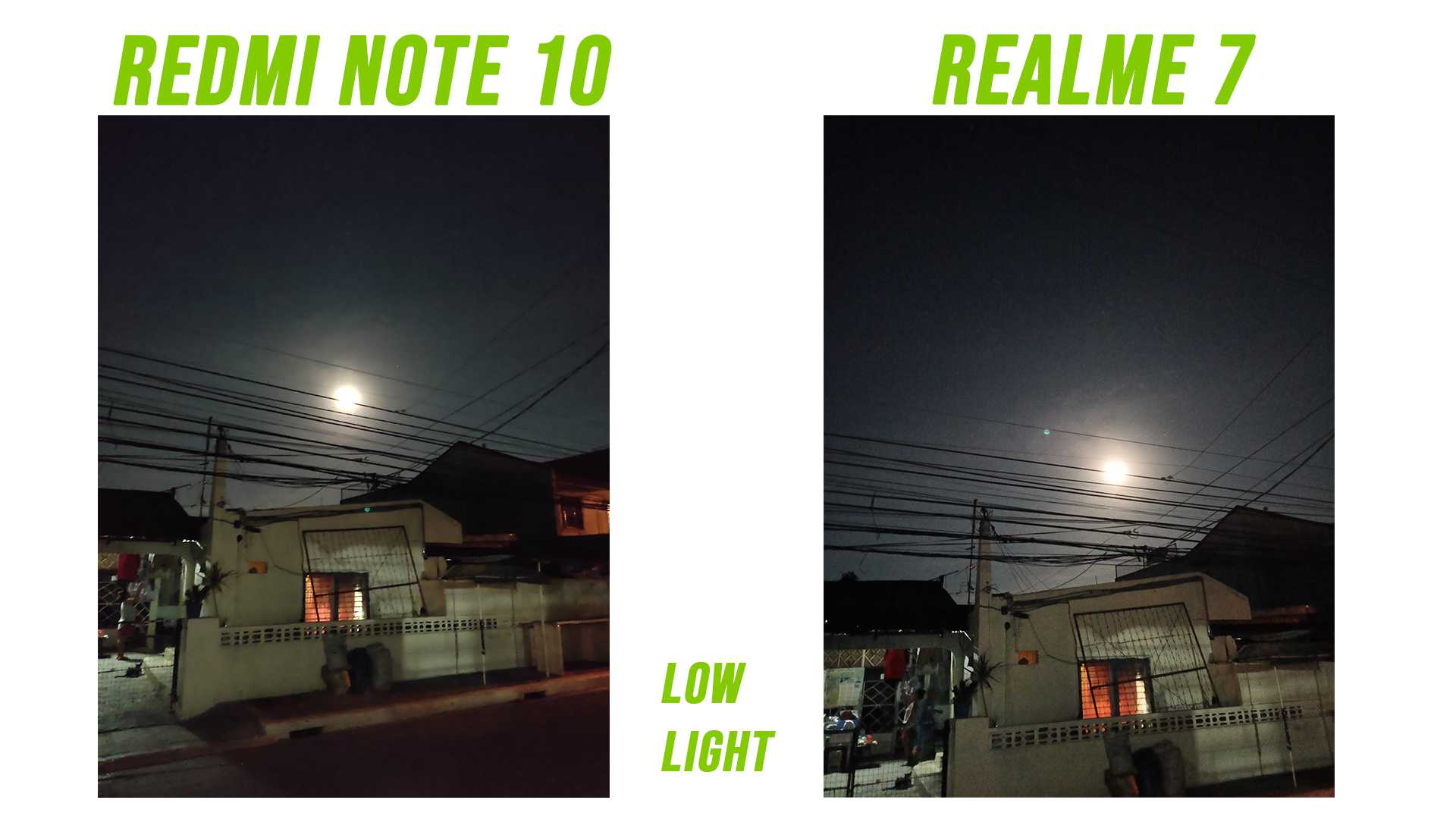 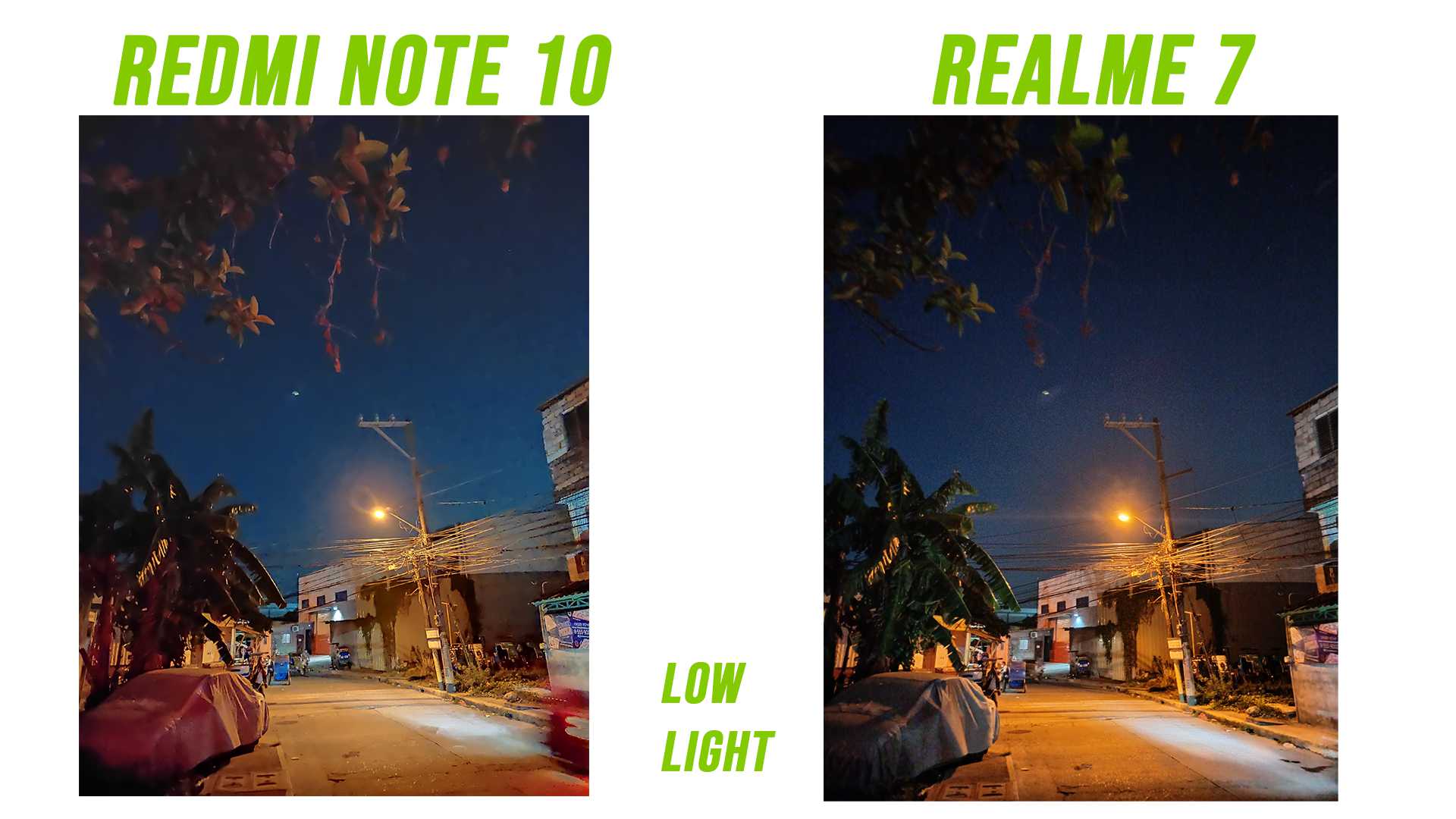 The macro sensors are a bit challenging to use for both. We recommend taking photos in a place with plenty of light and a steady subject to make photos appear sharper.

For the portrait mode, Redmi Note 10 did a decent job in blurring the background while the realme 7 did a quite decent job in handling colors though it quite struggles in capturing correct white balance.

Overall, the realme 7’s bigger 64MP quad-camera performed well in our comparison. But the Redmi Note 10 camera proves that having a bigger sensor does not mean a better image quality, as its 48MP camera managed to deliver better low-light photos and overall brighter shots.

When it comes to performance, Realme 7 is powered by the Mediatek Helio G95 with a larger 8GB of RAM and 128GB internal storage, while the Redmi note 10 is powered by a power-efficient Snapdragon 678 with up to 6GB RAM and up to 128GB storage. In this comparison, we’re using the top model of the Redmi Note 10.

Pulling up their benchmark scores, Realme 7 still holds the lead over the Redmi Note 10 in the CPU and GPU category. But, the lower clock frequency of the Note 10 shows better heat dissipation over realme 7. In the real-world, both are more than enough to handle the day-to-day requirements of a regular user, including medium gaming.

We tested the capability of the two to run Genshin Impact and Wildrift. We maxed out the settings in Wildrift and played with no frame drops, while both performed solidly in Genshin impact.

Nearly 7 months later, Realme has yet to drop the Android 11 update for the realme 7. On the other end, Redmi Note 10 is already running MIUI 12, which is based on Android 11, loaded with new features that are not present in its competitors.

As for the battery, they both have a 5000mah capacity, with Redmi note 10 having a slightly faster 33W fast charging than realme 7’s 30W. Both can be fully charged under 1 hour and 30 minutes, with the Realme 7 being a few minutes quicker. Longevity-wise, Realme 7’s 90Hz LCD does sip a lot of juice, though lasting a whole day, whereas the Redmi Note 10’s Super AMOLED provided us a bit more for the next morning.

IF you’re looking for the best value for your money, then the Redmi Note 10 is the top choice here. It has a premium design, punchy AMOLED display, fast chipset, and reliable camera–all for less. It’s a solid bang-for-the-buck smartphone for any type of task — may it be in gaming or browsing or online class. Although realme 7 is an older-looking phone, it still packs a punch in its weight class, especially in gaming.