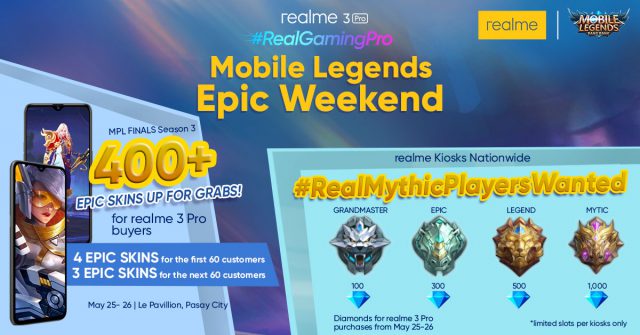 Realme Philippines is currently in the middle of launching its #RealGamingPro smartphone — the Realme 3 Pro — a budget yet capable gaming device. That said, the company is partnering with Mobile Legends as it launches an epic weekend for gamers on May 25th and 26th. By purchasing a Realme 3 Pro, customers can get up to 1000 in-game diamonds and Php3,600 worth of epic skins.

Exclusive to all Realme kiosks, ranked Mobile Legends players with Grand Master, Epic, Legend, and Mythic status can get up to 1,000 in-game diamonds with every purchase of a Realme 3 Pro. Slots per kiosk are limited, so buyers are encouraged to claim early and be ready to present their Mobile Legends ID to qualify.

Nonranked Mobile Legend players are encouraged to find a ranked friend to qualify for the promo themselves.

Realme 3 Pro has an official starting price of P12,990(4GB/64GB) and goes up to P14,990(6GB/128GB). You can get it from Realme kiosks nationwide and partner stores, such as MemoXpress, PC Express, and Fonestyle.

READ: Why Realme 3 Pro is the best budget gaming phone in 2019