The OPPO R series finally made a comeback in the Philippines with the R17 PRO. The new R17 Pro has triple AI rear cameras and comes with dual batteries and we made sure to test them. Is this new OPPO smartphone a bang for the buck? Let’s find out.

Watch the full video review down below. 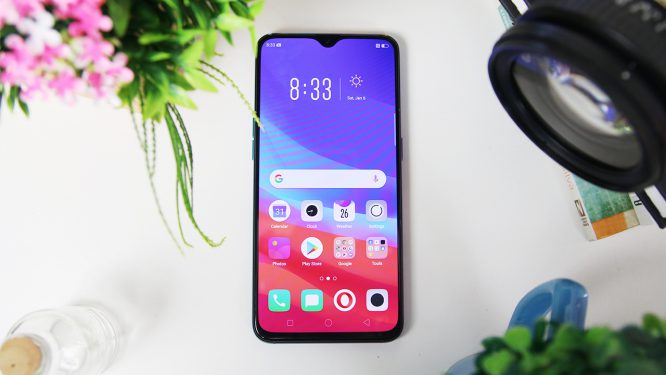 The OPPO R17 Pro sports a 6.4-inch Full HD+ AMOLED display with 2340 x 1080 resolution and 402ppi density. In addition, the screen is protected by Corning Gorilla Glass 6. Looking at the display, it’s hard to differentiate this new OPPO handset from the company’s midrange OPPO F9 that was released a few months ago due to the screen size and design similarity. Both also bears a waterdrop notch that is a bit smaller than most notches in the market. The smaller notch provides a 91.5% screen to body ratio, though this notch can be irritating for some who are easily annoyed by unbalanced proportions.

Its screen was bright enough and it managed to produce a good color representation when we tried watching some movie trailers. The color also doesn’t change when viewed from different angles. We also tried taking some shots outside and we didn’t have any issues with looking at the screen.

The OPPO R17 Pro has an undeniably stunning rear design and for femme millennials, this handset is an eye-catcher. Yes, the blueish-purple gradient smartphones aren’t technically new this 2018, but the matte finish of this handset makes it stand out from others with the same rear design, color-wise. Going to its dimensions, the OPPO R17 Pro measures 157.6 x 74.6 x 7.9 mm and weighs 183 g.

This smartphone offers great ergonomics and even for mundanes with small hands (like me lol) the R17 Pro fits just right and another good thing: due to its matte finish, it’s less prone to fingerprint smudges. However, it’s a little heavier compared to the OPPO F9, and other OPPO smartphones and this might be because of the R17 Pro’s dual batteries. 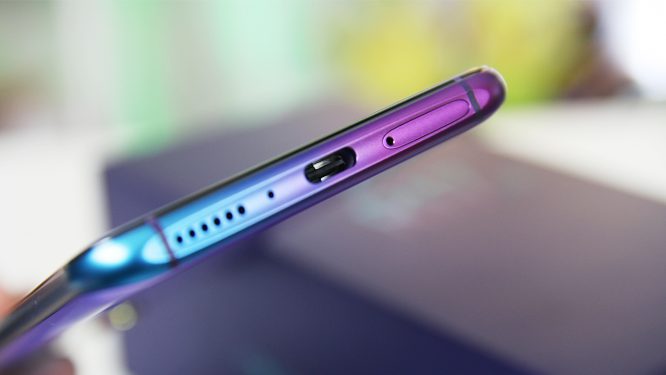 Similar to the F9, the R17 Pro has a drop-like notch and thin bezels. At the rear of the handset, the triple cameras are positioned vertically at the center with the LED flash underneath. Moving on to the bottom, we’ll see the USB Type-C charging port, speaker grille, and a microphone. Meanwhile, capacitive keys are at the sides of the handset with the power button at the right while the volume rockers are at the opposite side.

The OPPO R17 is the company’s first device with a AI triple camera setup. It features a 25MP main sensor+ 20MP secondary camera + TOF 3D (time-of-flight) stereo camera. One of the main highlights of the cameras on the R17 Pro is the Ultra Night Mode.

As mentioned, the cameras on the OPPO R17 Pro are AI enabled and will instantly recognize the scene and automatically enhance the photo. For these shots, the AI cameras of the R17 Pro recognized the seen as “sky” and made the necessary color adjustments to brighten up the photos and made them more vibrant.

For this one, the AI cameras of the R17 Pro recognized the sunset/sunrise scenery and enhanced the orange hues and saturation of the photo.

Jumping to the portrait shots, the bokeh effect does not look artificial in any way and also has sharp edges to make the subject pop out of the background.

As expected, the OPPO R17 Pro can take killer night shots with its triple AI cameras and with the Ultra Night Mode. The AI technology will automatically detect the scene as night and will instantly make adjustments to produce better night shots. Also, when you switch to the ultra night mode, it’ll take the photo with long exposure. It’s amazing how we can take long exposure shots without having the need for a tripod.

Just like what we’ve seen in OPPO Find X and F9, it also has the OPPO Game Space where the system improves for the better gaming experience.

As mentioned earlier, this handset provides great viewing experience and can take superb photos, especially night shots. However, the OPPO R17 Pro isn’t technically for heavy gamers out there as the company didn’t make this handset for graphically heavy games and powerful performance. This smartphone sits at the middle of the smartphone-type hierarchy as it is a premium midrange handset. The company chose to put a Snapdragon 710 when they could easily place an 845 chipset and make this a flagship. Nevertheless, it’s great for web browsing, photography, and light gaming.

We also tested this handset using the following benchmarking tools and here are the results:

Another notable surprise of this smartphone is the battery. The OPPO R17 Pro has two 1,850 mAh batteries making it a sum of 3,700 mAh. It is geared with a fast charging feature powered by SuperVOOC technology.

Upon testing, we got a fully charged OPPO R17 Pro in just about 35 mins. The SuperVOOC technology definitely lived up to its name. For its battery life endurance, this handset can stay up for around 2 days with full web browsing, medium media playback, and light gaming.

The OPPO R17 Pro produces loud audio despite only having one speaker. Although the audio can be scratchy when the volume is set at maximum level. On medium volume though, it wasn’t loud enough but the sound was clearer.

This smartphone can definitely seize the night with its AI cameras and the dual batteries can last for two whole days with just about 35 minutes of fast charging. We can say that this OPPO handset is made for youngsters who has a big heart for photography and traveling. But if you’re into smartphones that can handle heavy gaming, this is not what you’re looking for.

The OPPO R17 Pro is priced at PHP 38,990 and to be honest, it’s a bit pricey. I mean, there are a variety of smartphones in the market with much higher specs for that price tag, or even lesser. But again, it always depends on you. After laying out the camera results, battery and performance test results, is this smartphone for you? Let us know in the comments below!