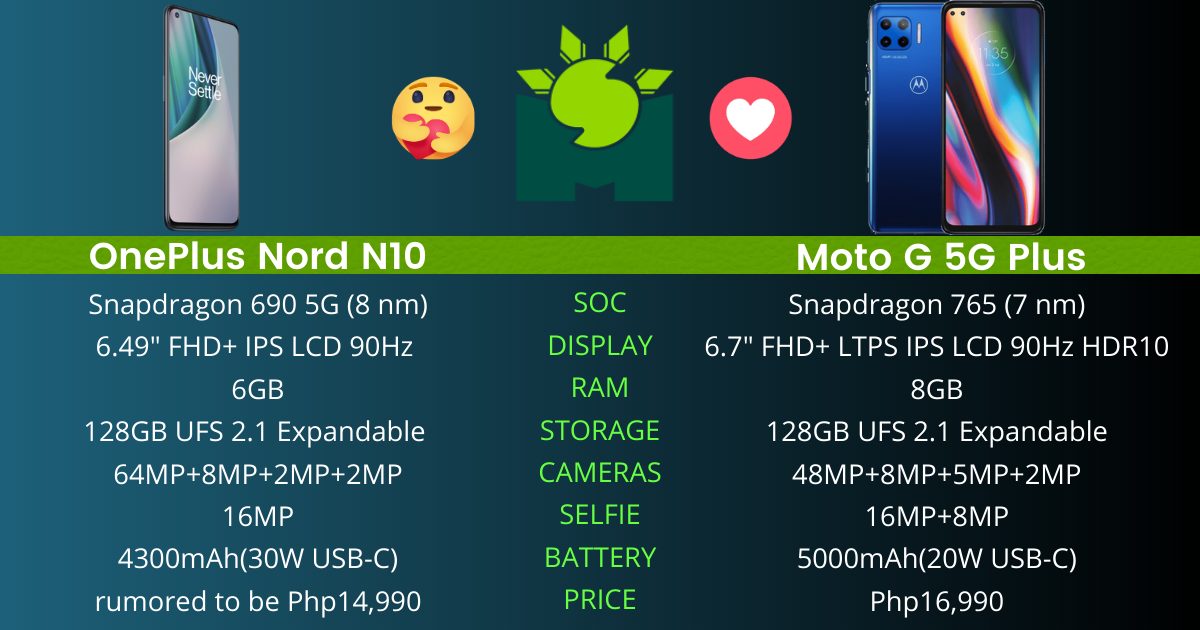 At the moment, Moto 5G 5G Plus is the most affordable 5G phone in the Philippines. However, that isn’t’ bound to happen until this December. With Moto pushing the release into the holidays, this gives the upcoming OnePlus Nord N10 a chance to steal the spotlight. According to initial rumors, OnePlus’ cheapest 5G device is set to debut at Php14,999 only. With that in mind, which is the better phone to get? 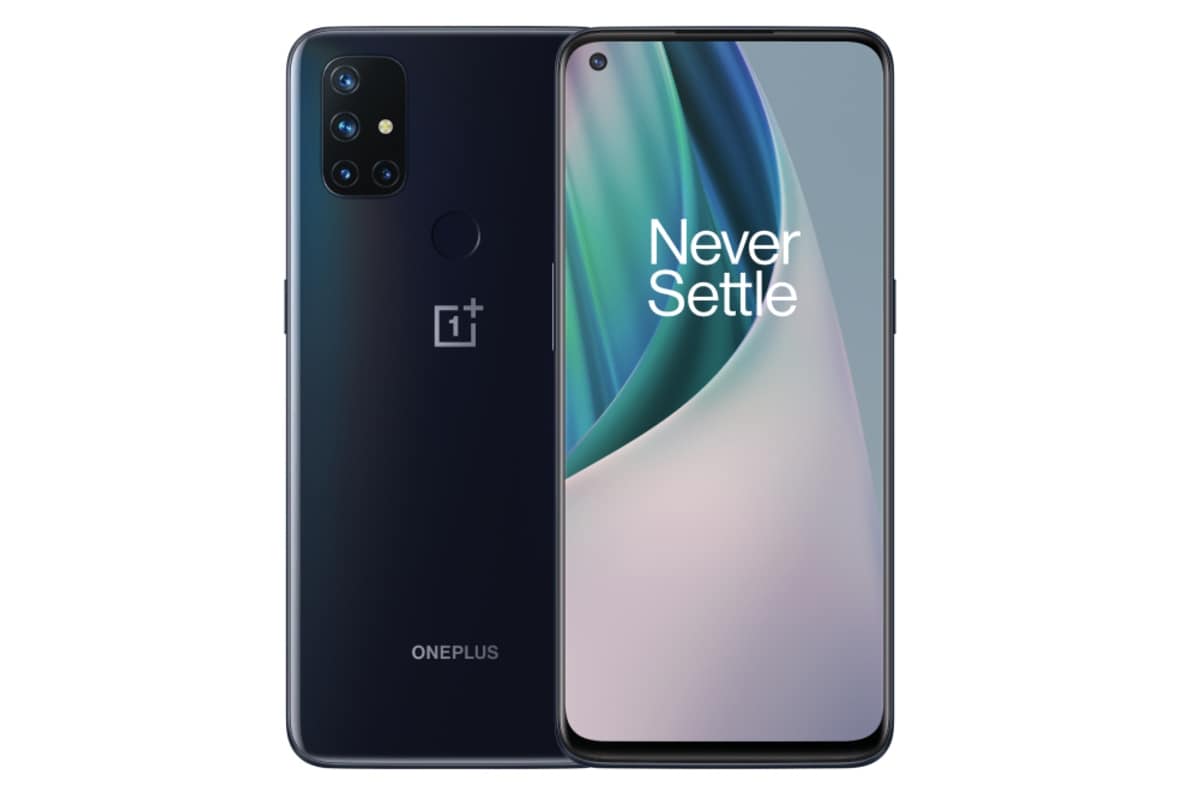 Which is the better buy between the OnePlus Nord N10 and Moto G 5G Plus?

Due to the price of putting a 5G modem inside these devices, neither of the two standout when it comes to the design. There’s no special finish on the back nor frosted finish that’s seemingly popular lately. Even the gradient-like plastic backing on the Moto 5 5G Plus doesn’t scream at your face. On the flip side, the body is water-repellent coated. Where the Nord N10 gets a thumbs up is in dimension, as it has the thinner profile at 190g and 9mm. Unfortunately, the device is also of plastic.

With no outstanding feature to boast, we feel like the two devices are a tie in the design department.

Other than 5G, the main reason why you’d want to get either of the two is its display. Both are sporting 90Hz, which is smooth enough for any casual user but not as battery-draining as other 120Hz phones or above.

Though picture quality is nearly on par with each other, thanks to their IPS LCD, Moto 5 5G Plus gets the nod when it comes to the more capable screen. Moto makes use of LTPS that allows for lower power consumption, better durability, and faster response times, in addition to the brighter and more colorful panel when it comes to watching HDR10-capable content.

We can’t also deny the fact that most consumers still prefer unwieldy large screens, which the Moto 5 5G Plus has thanks to its 6.7″ diagonal footprint as opposed to the 6.49″ of the Nord N10.

For all those reasons — we’re picking the Moto 5 5G Plus as the winner when it comes to the display quality.

Snapdragon 690 vs Snapdragon 765G — Despite the 7-month gap, Qualcomm’s 690 is actually on par with 765G, even with the slightly lower clock speed, memory bus, and bigger processing node. The same goes for the Adreno 619L GPU when compared with the Adreno 620 of the 765G. In fact, synthetic benchmarks from Geekbench show that both chipsets are neck-and-neck, sometimes faster for the 690 when it comes to single-core performance. But regardless, both are sporting a built-in 5G modem.

When it comes to the software experience, Moto 5 5G Plus provides that near-stock Android experience with only a few customizations in tow, such as gestures and actions. The Nord N10, on the other hand, will slowly shift away from its roots — all while keeping the same speed and fluidity of OxygenOS. Though you’re guaranteed one major software update only, albeit slower, Moto might be able to provide more than that.

As for the memory, Moto 5 5G Plus has the bigger combo thanks to the company bringing the 8GB/128GB in the country. The Nord N10 isn’t too far behind, but the 6GB RAM configuration may feel lacking to some.

We think both are on par with each other, whether it’s pure hardware or software. However, we can’t deny the fact that the Nord N10 will feel outdated as soon as you receive that first major upgrade.

For now, we’re giving the edge to the Moto device due to better software support and slightly higher RAM capacity.

While both devices are sporting quad-cameras, the Nord N10 has the technical advantage over the Moto 5 5G Plus. Thanks to the 64MP sensor, the overall picture quality is sharper or more detailed as opposed to the 48MP. But for the rest of the lenses, the experience is pretty much the same. What’s more interesting is the fact that the N10 can record up to 120fps slo-mo videos at 1080p. The Moto 5 5G Plus can only do up to 60fps.

If you’re more of a selfie shooter, however, the dual-pinhole 16MP+8MP is a lot more useful due to the addition of an ultrawide lens. Whereas the Nord N10 is only housing a 16MP selfie shooter.

It’s up to you whether you prefer a more versatile selfie camera or a more reliable main shooter.

The sound quality appears to be significantly better on the Nord N10 as it already packs dual-speakers. But for a 5G device, we’re glad to report that both are still offering audio jack. But then again, you’re getting louder, crisper, and richer sound output from the Nord N10.

In addition to the LTPS screen and smaller processing node, the Moto 5 5G Plus will easily get through a day with a spare for the next due to the 5000mAh battery. However, topping up will require, more or less, two hours via a 20W charger.

Personally speaking, I prefer long screen time between charges. But, what about you?

The Moto 5 5G Plus will become available for purchase for only Php16,990. Compared to the Nord N10, you’re getting better screen quality, dual-selfies, and up to a two-day worth of battery.

Assuming the Nord N10 arrives at Php14,990, you’re essentially getting better camera quality, snappy OxygenOS, and dual-speakers — lest we forget — for less than Php2,000.