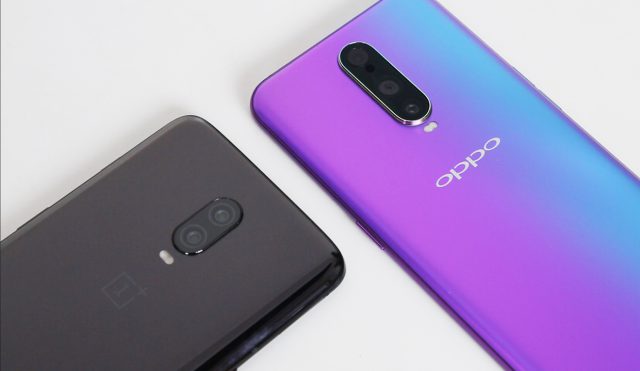 As we finally got our hands on a OnePlus 6T unit, we ‘ve been getting a lot of comparison requests. One of the most requested comparisons is the OnePlus 6T vs OPPO R17 Pro. Both handsets have their own strength in specific departments, but which PHP 30K+ handset is for you? Let’s find out here!

Going to their notches, both have the waterdrop-like notch. But there’s a difference though, you can get rid of the notch on the OnePlus handset by ticking the “Hide the notch area” option located at the settings, on the other hand, there’s no such thing on the R17 Pro – you’ll just need to get used to its notch since there’s no way to put a black bar on its sides.

With the two handsets sitting side by side, you can see that both handsets are at par when it comes to screen brightness – with the R17 Pro having a slightly warmer toned display than the OnePlus 6T. In terms of resolution, both deliver sharp details and accurate colors.

Design-wise, the OPPO R17 Pro has an undeniably stunning rear design and for femme millennials, this handset is an eye-catcher. Also, the matte finish of this handset makes it stand out from others with the same rear design.

Going to the optics, the OnePlus 6T features dual rear cameras of 16 MP, f/1.7 + 20 MP sensor. For taking selfies, this handset is equipped with a 16MP f/2.0 front camera. On the other hand, the OPPO R17 is the company’s first device with an AI triple camera setup. It features a 25MP main sensor+ 20MP secondary camera + TOF 3D (time-of-flight) stereo camera. One of the main highlights of the cameras on the R17 Pro is the Ultra Night Mode.

These daylit shots were taken on a gloomy afternoon. The major difference between the two photo results are their color tones. The OnePlus handset produced a daylit shot with cooler and dimmer tones while the R17 Pro with a more warmer and lighter output. In regards to the photo clarity, both have sharp details.

The portrait mode on both devices also works like a charm. The bokeh effect does not look artificial in any way and also has sharp edges to make the subject pop out of the background.

Heading to the night shots. It’s undeniable that the Mate 20 Pro can capture amazing night shots. Both smartphones have a Night Mode feature that will capture the scene with long exposure. It’s amazing how we can take long exposure shots without having the need for a tripod.

The OnePlus 6T and OPPO R17 Pro aren’t only great in taking rear shots but selfies as well. Personally, we like the selfies taken on the OnePlus 6T more for its naturally beautified selfies. The selfies on the R17 Pro looked too bright and slightly unnatural in comparison with the latter. But that’s just us, it still depends on your taste on which selfie-look suits you best, though. Going to the bokeh effect, both produced great selfies with bokeh too.

The OPPO R17 Pro is powered by a Qualcomm Snapdragon 710 Processor with an 8GB RAM. It has a 128GB internal storage but it’s sad to say that it is not expandable. This OPPO smartphone runs on a Color OS 5.2 based on Android 8.1 Oreo out of the box while the OnePlus 6T runs on Android 9.0 (Pie) OS and is powered by a Qualcomm Snapdragon 845 2.8GHz octa-core processor with Adreno 630 GPU. It comes in two storage variants – 6GB/8GB ROM + 128GB of internal storage.

Of course, we tested how these smartphones can play graphically heavy games. The games we played were Asphalt 9 and PUBG. Launching the games on the OnePlus was quick and there weren’t any problems during gameplay as well. No lags occurred, the graphics are detailed and has smooth frame rates- this is because of its powerful hardware. Meanwhile, the OPPO R17 Pro isn’t technically for heavy gamers as this smartphone sits at the middle of the smartphone-type hierarchy as it is only a premium midrange handset. The company chose to put a Snapdragon 710 when they could easily place an 845 chipset and make this a flagship. Nevertheless, it’s great for web browsing, photography, and light gaming.

Jumping to the benchmark scores, here are the results:

Going to the battery department, this is where the R17 Pro shines. The OPPO R17 Pro has two 1,850 mAh batteries making it a sum of 3,700 mAh. It is geared with a fast charging feature powered by SuperVOOC technology. Upon testing, we got a fully charged OPPO R17 Pro in just about 35 mins. For its battery life endurance, this handset can stay up for around 2 days with full web browsing, medium media playback, and light gaming.

Same with the R17 Pro, the OnePlus 6T also has a 3700 mAh battery pack. It enjoys a 20W fast charging and upon testing, the 6T can be fueled up within an hour from 0% to full battery, and the handset will last approximately a day and a few hours more of light gaming, medium media playback, and full web browsing.

In terms of audio loudness, the OnePlus 6T has louder audio than the R17 Pro. Also, the OnePlus’ audio has better sound quality especially when the volume on both handsets are set at maximum level.

Both handsets have their own strength and have some features that might suit you more. But for us, we’d pick the OnePlus 6T over the OPPO R17 Pro since it has a more powerful processor than the latter – the OnePlus with a flagship Snapdragon 845 and runs on Android 9 Pie while the OPPO handset runs on a Color OS 5.2 based on Android 8.1 Oreo and is powered by a midrange Snapdragon 710.

After laying out the difference and similarities of both handsets, and with a few thousand pesos difference in pricing, which smartphone is for you? Comment down below!