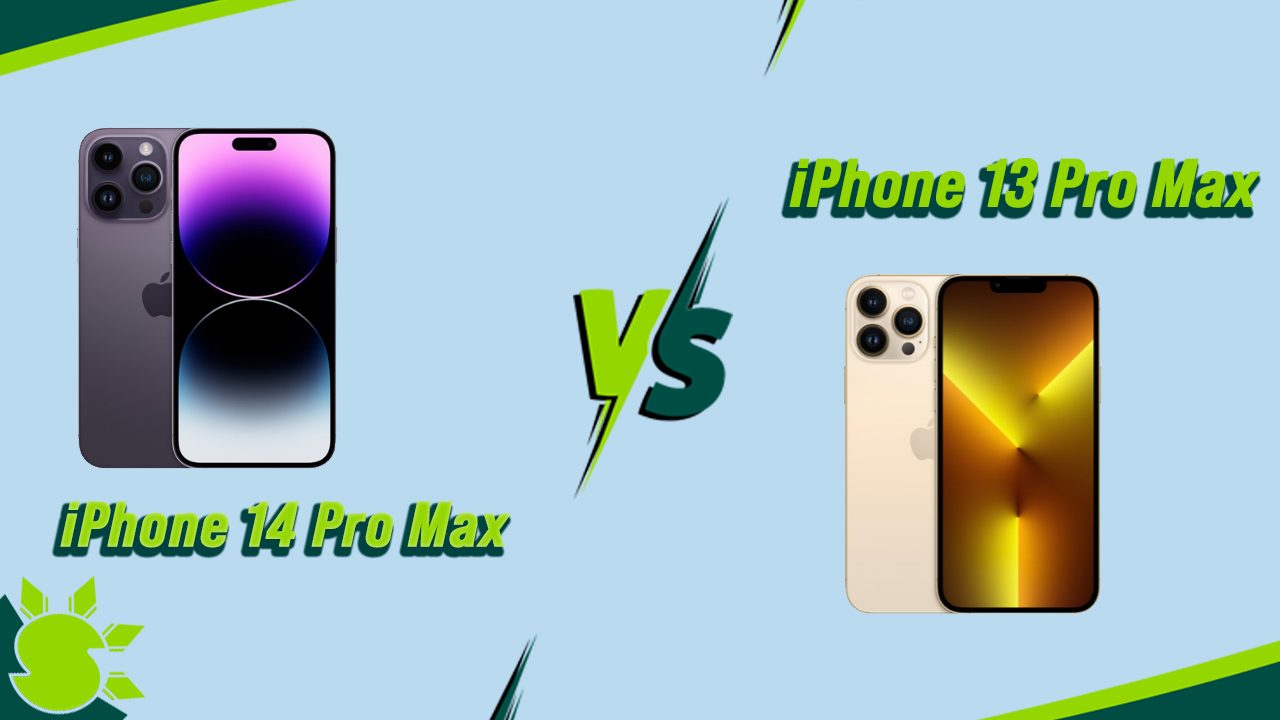 The same 6.7-inch Super Retina XDR OLED panels are found on both handsets. The iPhone 14 Pro Max has a little greater resolution, or 458 ppi, than the iPhone 13 Pro Max, which has a slightly lower resolution, or 458 ppi. The distinction is insignificant and won’t be perceived. However, the 14 Pro Max’s new TrueDepth camera with a Dynamic Island design will catch your attention. The pill-shaped hole in the screen of the 14 Pro Max will be used to create a more dynamic and aesthetically engaging interface.

The 14 Pro Max has a new 4nm A16 Bionic chip from Apple, which is more powerful than the 5nm A15 Bionic in the 13 Pro Max and can handle demanding workloads and the new camera functions of the former.

The two gadgets feature three rear LiDAR cameras. The 14 Pro Max, however, has updated cameras with stronger functionality. It sports a 48MP primary sensor, which Apple claims is 65% bigger than the one in the 13 Pro Max. Additionally, it boasts a second-generation sensor-shift OIS, which is also included in both the 12MP telephoto and 12MP ultra-wide cameras. The Photonic Engine, Action Mode, and Cinematic mode, which can now record in 4K HDR at 24 frames per second, are some of its new features.

e still have a 12MP selfie sensor, but it now features AutoFocus and Photonic Engine.

The same dual SIM (nano-SIM and eSIM) or dual eSIM compatibility, 5G, WiFi 6, Ultra Wideband chip, NFC, GPS, and Lightning connector are present in the iPhone 14 Pro Max. But it boasts Bluetooth 5.3, an increase from Bluetooth 5.0 on the iPhone 13 Pro Max for faster connectivity, more bandwidth, and less power usage.

Both devices include FaceID, dual speakers, IP68 certification, and Emergency OS as additional features; however, the iPhone 14 Pro Max offers Crash Detection, which enables users to notify emergency services in the event of a car accident.

Although the iPhone 14 Pro Max’s battery size is yet unknown, Apple claims that the device can play videos for up to 29 hours, one hour more than the iPhone 13 Pro Max’s 28 hours. Both feature MagSafe and 15W wireless charging.

As is customary for a brand-new, top-of-the-line flagship, the iPhone 14 Pro Max comes with hefty price tags. The good news is that some authorized dealers are still selling the iPhone 13 Pro Max for a substantially reduced price even though it is no longer part of Apple’s official range.

Which one to get?

Apple’s Pro Max-branded iPhones are made for artists who want a smartphone with outstanding photographic features, not just for buyers who want the greatest iPhones on the market. If the former is where you belong, your pocketbook is the only thing holding you back. If that’s a concern, the iPhone 13 Pro Max is still a fantastic choice. The iPhone 14 Pro Max is a worthwhile upgrade if you’re a developer with a large budget who can definitely make the most of the more formidable cameras.