Huawei and OPPO are two of the smartphone brands that have been competitively releasing entry-level to midrange to flagship devices this year. These Chinese smartphone manufacturers receive lots of hype from their respective PH and Worldwide fanbases and keep on attracting consumers to switch to their brands.

Now, we have here the newest flagships from the two competitive smartphone brands- the Huawei Mate 20 Pro and the OPPO Find X – to test out which flagship smartphone suits you the best and be a guide if you’re planning on purchasing one. Let’s start with their respective specs:

The new Huawei Mate 20 Pro packs a 6.39-inch curved AMOLED display with 1440 x 3120-pixel screen resolution and amazing 538 ppi density. The curved display isn’t technically new, though since we’ve already seen tons of them from Samsung, but one thing is for sure: the curved design made this handset look and feel like the top flagship in town. Looking at the notch, it’s a little bulkier than the Mate 20’s drop-like notch. If you’re not a fan of the black bar, there’s an option to get rid of it, just head to settings.

Now, going to its contender, OPPO’s latest flagship, the OPPO Find X sports a 6.42-inch AMOLED display with a screen resolution 1080 x 2340 pixels and an aspect ratio of 19.5:9 protected by Corning Gorilla Glass. In addition to that, this smartphone has Panoramic Arc all screen display. One thing that beats the Mate 20 Pro and other flagships in the market is Find X’s slider mechanism. The slider houses the cameras and sensors that are the main problem why we gotta have a notch, and since OPPO got rid of it through their pop-up camera mechanism, the Find X provides its users a full-screen bezel-less display.

With the two handsets sitting side by side, you’ll see that both handsets are at par when it comes to brightness when pushed up to the maximum level, though the devices differ in screen tone. At default display settings, the Mate 20 Pro produces a more accurate and natural screen color whereas the Find X with a warmer tone. 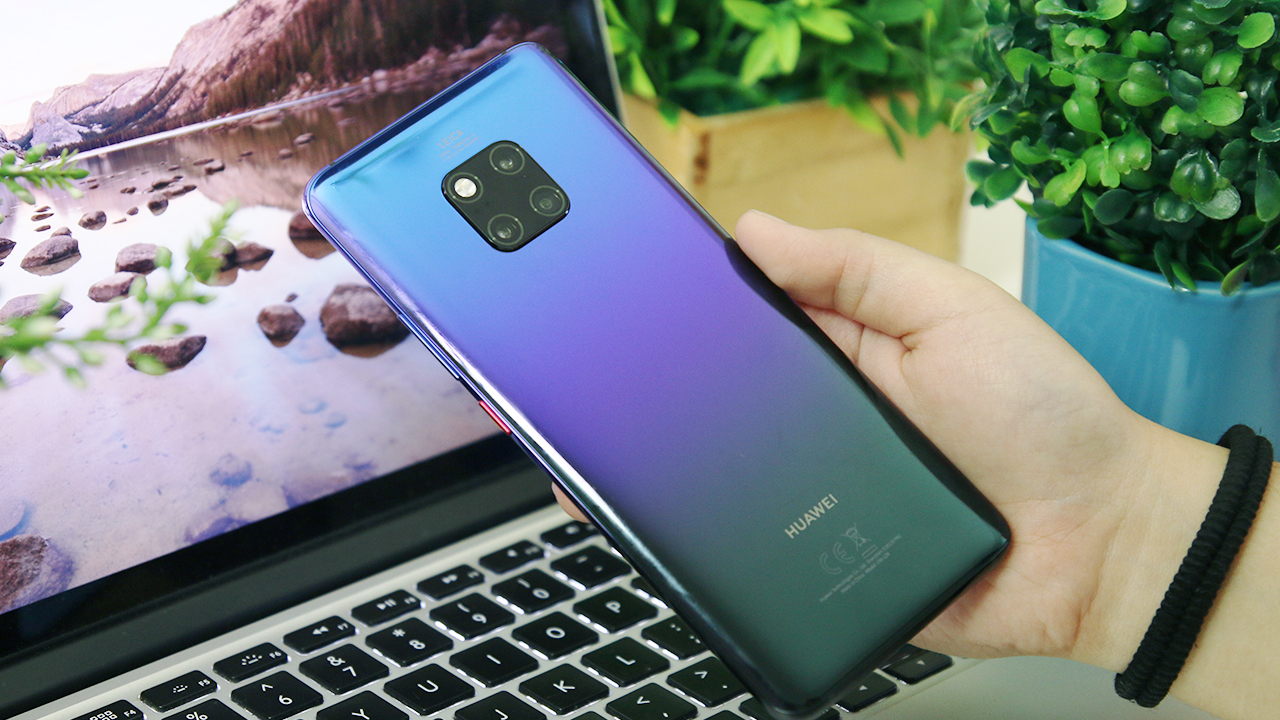 Again, the curved display on the Huawei Mate 20 Pro looks good and is definitely an eye-catcher. Going to the back panel of the handset, you’ll notice the unique camera setup. Personally, I’m not a huge fan of how Huawei placed the cameras on the new Mate series.

The OPPO Find X, on the other hand, features a glass front and back with a metal frame that is protected by Corning Gorilla Glass 5.. Popularized with modern design and innovative features, the OPPO Find X is one of the few smartphones today with the motorized camera.

Unlike most recently released handsets this year, these two flagship handsets don’t have rear-mounted fingerprint scanners, but the Huawei Mate 20 Pro does have the innovative in-display fingerprint sensor that was first seen on a Vivo handset.

Design-wise, the Huawei Mate 20 Pro’s rear design looks stunning, especially the Twilight variant. The OPPO Find X’s design is undeniably and uniquely stunning as well. However, there’s still a downside to these handsets’ rear design, both were slippery upon holding and prone to fingerprint smudges. Gripping both devices, the Huawei Mate 20 Pro wins as it has better ergonomics.

One of the main features of the devices that we have today are their cameras. The Huawei Mate 20 Pro with triple 40 MP + 20 MP + 8 MP rear Leica optics and a 24 MP front snapper.

Going to the OPPO Find X, it features a motorized camera that houses a dual 16 MP + 20 MP and a 25MP front-camera.

As for the detail sharpness and clarity, the Huawei Mate 20 Pro produces sharper and clearer photos than the OPPO Find X, especially when zoomed in. Going to the color presentation and accuracy, the OPPO handset delivers more vibrant photos than the latter.

Same with the previous sample set, details are clearer and sharper on the Huawei photo and it captures color more accurately when the AI feature is disabled than the OPPO handset. Jumping to the second sample set, the photo captured by the Find X was overexposed a bit.

When we took these shots, the AI feature for both handsets were enabled but unfortunately, the Find X was not able to recognize the greenery scene. As for the Mate 20 Pro, it instantly recognized the subject and automatically adjusted the camera settings.

The AI technology instantly recognized the subject as “food” and made the photo brighter, more vibrant, and added a little pinch of contrast. In comparison, the food shot captured by the Mate 20 Pro looks more enticing than the Find X’s in our opinion.

Heading to our night shots! Undeniably, the Huawei Mate 20 Pro captures more details than the opponent. Looking at the night shots, details are sharper and deeper blacks are present on the Mate while the light scattered a bit on the Find X that it overexposed the small details.

Both handsets also have AI beautification on their front snappers. We’ve set the AI beauty feature at 4 for both handsets and as you can see, the AI wonders worked more on the OPPO Find X. It made the subject’s face slimmer, smoother, and lighter than the Huawei smartphone did. If you’re into the beautifully enhanced selfies, the Find X is for you. But if you like a more natural beautification, go for the Mate 20 Pro.

The Huawei Mate 20 Pro carries the company’s latest HiSilicon Kirin 980 chipset, which is said to be more powerful than any other 10nm chipsets. Along the new processor, there’s Mali-G76 MP10 GPU and this handset runs on an EMUI OS based on Android 9.0 Pie out of the box. Furthermore, the EMUI 9 supports GPU Turbo 2.0.

The OPPO Find X is powered by Qualcomm Snapdragon 845 coupled with Adreno 830 GPU that carries 8GB of RAM + 256GB internal storage that runs on Android 8.1 Oreo.

Media playbacks on these phones are enjoyable with Huawei’s curved display and the completely bezel-less and notchless display of the OPPO Find X. Apart from that, there’s a video display enhancement feature in the OPPO Find X. It improves the quality and presents vivid videos as well. Its motorized camera feature may be the game changer as of today, however, it’ll take a short time for the face unlock to happen, since the slider camera will have to pop-up first. It’s definitely not the fastest face unlock.

As for the Mate 20 Pro’s security features, both the face unlock and in-display fingerprint sensor works like a charm – fast and accurate.

And of course, we have to test how these flagship smartphones can play graphically heavy games. Upon testing, both handsets are great for gaming, no lags of some sort were encountered while playing Asphalt 9 and PUBG, Rules of Survival, and more heavy games even at max settings. However, the OPPO Find X heated up a little after around 40 mins of non-stop gaming at max resolution. What about the Mate 20 Pro, you ask? Seamless gaming. We’ve been using this device for a few days now and we haven’t encountered any problems so far.

The Huawei Mate 20 Pro packs a large 4,200 mAh battery and enjoys Huawei’s 40W SuperCharge. We were surprised by how fast this handset charges. From 10% battery, in a matter of 14 minutes, we already have 40% of battery juice. It took only less than an hour to fully charged the battery. Going to its battery life endurance, this smartphone can last around two days of full web browsing, medium media playback, and light gaming.

Meanwhile, the OPPO Find X is fueled by a 3,730 mAh battery pack. It lasted around 20 hours of casual web browsing with light gaming and media playback before the battery to be completely drained. The handset took an hour to meet 70% all thanks to VOOC flash charge. However, it surprisingly took longer than expected as it fully charged in an hour and 53 minutes.

The Huawei Mate 20 Pro produces louder audio with its stereo speaker, also not scratchy even in maximum volume. However, the speakers are slightly uneven. You might notice this when watching music videos and it can be irritating.

In comparison, the Find X also provides great volume level despite only having a mono speaker but a little scratchy when the volume is set to maximum level.

Both the Huawei Mate 20 Pro and OPPO Find X retails for PHP 49,990 and are now both officially available nationwide. After laying out their similarities, differences, pros, and cons, which flagship of 2018 is for you? Comment down below!