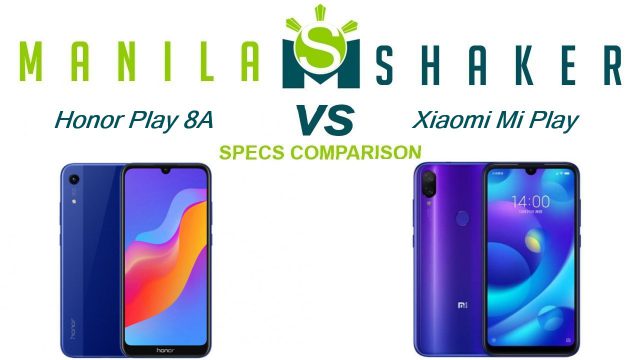 For budget gamers out there, Huawei and Xiaomi have released the Honor Play 8A and Mi Play, respectively, for under Php10k. Between the two, which should you be getting when they’ve been positioned as your cheap gaming phones?

Advantages of Honor Play 8A

Which is a better buy between the Honor Play 8A and Xiaomi Mi Play?

If not only with their respective branding, these two phones would be indistinguishable. It has the same notch and chin sizes with only the dual camera setup of the Mi Play setting itself apart (more on that later).

When it comes to displaying quality, you’ll enjoy crisper content on the Mi Play thanks to its FHD+ resolution.

Made for budget gaming, both are sporting the MediaTek Helio P35 SoC based on 12nm node in which its performance score is close (sometimes better) to that old-yet-efficient Snapdragon 625. Storage-wise, the Mi Play gets the advantage with 4GB/64GB combo out of the box.

The camera department continues to go to the Xiaomi contender as it features dual camera setup for the rear while the selfie camera is a toss-up at 8MP.

A potential deal-breaker for the Mi Play could be the use of a micro USB port in which the Honor Play 8A has left behind. However, you do get the rear-mounted fingerprint scanner which is quicker than face unlock.

The Honor Play 8A is estimated to locally arrive around Php6,000 while the Xiaomi Mi Play could retail around Php9,000.

As much as we want to recommend the Honor Play 8A as your next budget gaming phone, we feel like its 3GB of RAM might hold you back in most recent games. Overall, the Xiaomi Mi Play is looking to be a better buy despite its higher price tag.