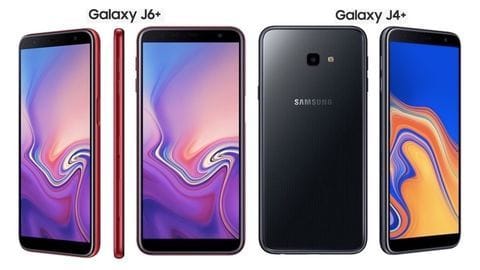 Samsung has finally revealed their upcoming launching of Galaxy J6+ and Galaxy J4+. The smartphone manufacturer hasn’t yet announced the official price but they formally revealed that the smartphones will be soon to be available in Amazon. Samsung will offer Gray, Black and Red variants for J6+. On the other hand, colors of Black, Gold and Pink will be available for J4+.

Specification of Samsung J6 Plus

Samsung J6+ sports a 6-inch infinity edge touch screen display and features high definition resolution. It is powered by a 1.4GHz quad core Qualcomm Snapdragon 425 processor and geared with Android 8.1 Oreo OS. It comes with two variants of 3GB RAM with 32GB internal storage and 4GB RAM with 64GB internal storage. However, users can still expand the storage up to 256GB through the use of microSD.

Specification of Samsung J4 Plus

Samsung J4+ sports a 6-inch HD+ Samsung Infinity edge display with a 720×1480 pixel touchscreen resolution.  The smartphone is set to be in Android 8.1 Oreo and powered by 1.4GHz quad core Qualcomm Snapdragon 425 processor.

It runs with 2GB/3GB RAM with 16GB/32GB internal storage and is expandable with microSD card. In terms of optics, J4+ has 13MP rear camera with LED flash and 5MP front camera.

In terms of connectivity, it is linked with 4G, WiFi, VoLTE and Bluetooth. It also features GPS and NFC options. The upcoming phone is power-driven by a 3,300mAh battery. Prices for both upcoming smartphones are still not yet officially announced.