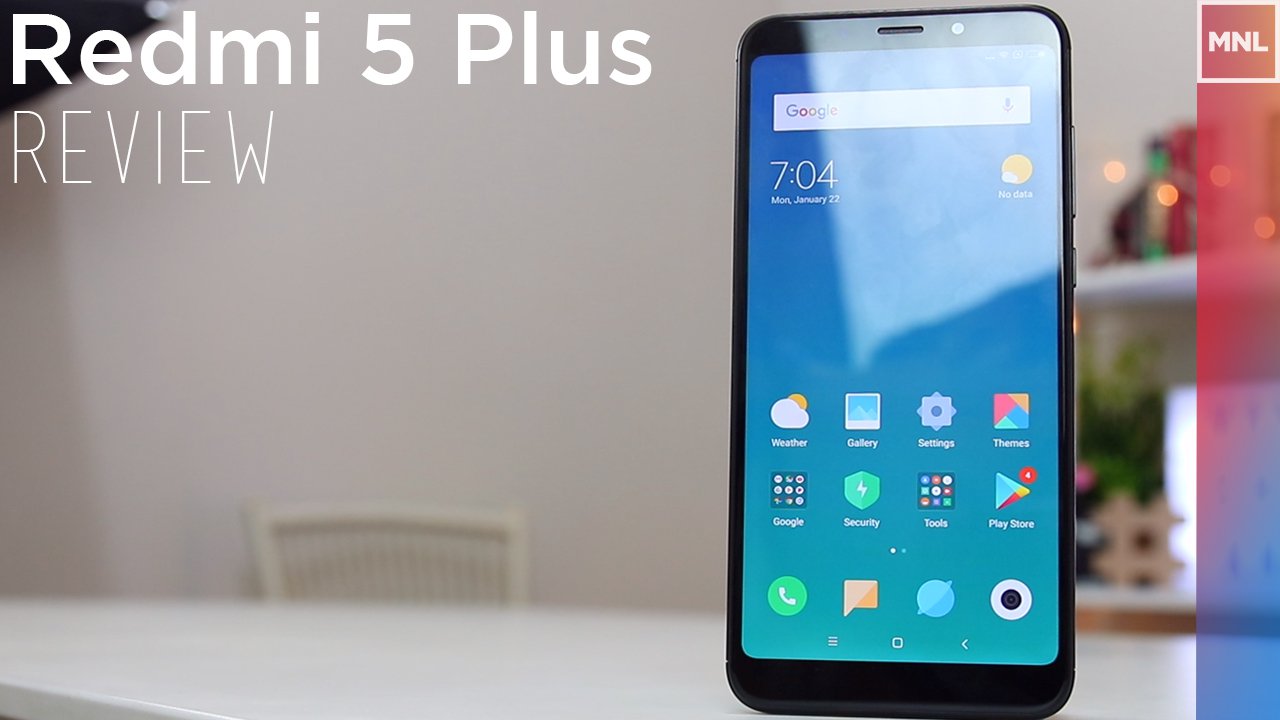 Last December 2017, Xiaomi released their latest mid-ranged 18:9 aspect ratio Smartphone the Redmi 5 Plus which was a china exclusive at that time. And before starting this review, lets first check out the specs of the Redmi 5 plus.

The Redmi 5 plus can easily be mistaken for most of the midrange 18:9 aspect ratio phones today for its overall design and build and looks a lot like the Redmi Note 4X with a bigger screen. And as all phones with this ratio, fingerprint scanner is placed at the back of the phone along with its single 12 MP camera slightly protruding.

The back part of the phone has an aluminum build and plastic ends which is prone to obvious fingerprint marks but the plastic case that comes with it helps solve that issue.  Atop of the phone is an extra stereo, an IR blaster and a headphone jack. SIM slot support either a dual SIM or a single SIM and an SD card. Lastly is its Micro USB port sandwiched by the phone’s speaker grills.

The Redmi 5 Plus has a 5.99” IPS LCD display and a 1080 x 2160 resolution protected by a corning gorilla glass, although Xiaomi haven’t yet confirmed which version they used on this handset.

On default, the Redmi 5 plus produces soft toned colours which can be calibrated through the display settings. Although it doesn’t offer a huge change in colour reproduction, changes are still noticeable whichever the user prefers.

The Redmi 5 plus comes with their latest MIUI 9 ROM based on Nougat which slightly resembles the Oxygen OS of the OnePlus phones, and like most Chinese ROMs the MIUI 9 lacks an app tray. The MIUI 9 is pretty easy to get used to if you are new to Xiaomi phones specially now it looks more minimalistic and it now features several languages after its global release which back then only supports English and Chinese languages. Although the Redmi 5 Plus doesn’t have a face unlock feature, its finger print scanner is pretty responsive with little to no errors in use.

Moving on to the camera, the photo shots of the Xiaomi takes in a lot of natural lighting which may result some overblown outputs although not affecting detail clarity. Night shots are not the strongest suit of the Redmi 5 plus on the camera department, which struggles to grip its focus on subjects specially with areas with little source of light.

Selfie results have a pretty decent result in outdoor lighting but tends to lose clarity as the source of proper lighting decreases.

Video recording surprisingly has great quality for a phone in this price group which can go up to 4k on 30 fps.

The unit we have is the 6GB RAM/64 GB storage variant powered by a Snapdragon 625 chipset same with the Redmi Note 4X which is pretty powerful for a phone with this kind this of price range, although playing high demanding video games does not produce the smoothest frame rates.

Xiaomi amped up the battery of the Redmi 5 plus to 4000mAh compared to its smaller variant the Redmi 5 with a 3300mAh pack. With its bumped up battery, the Redmi 5 plus can surely take a day of heavy usage with the help of fast charging.

The Redmi 5 Plus has a single speaker on the bottom bunk which Xiaomi made it look like there are two. There is also a 3.5 mm head phone jack at the top which you can also use to tune it to the radio. The audio could use a little more bass but loudness and clarity are pretty decent.

If you enjoyed the Redmi Note 4x, the Redmi 5 Plus is essentially the same phone with a higher screen ratio and some other minimal differences in specs. Although it is amazing the Redmi 5 Plus can record videos up to 4k which is unlikely for a phone in this price group.