Four camera phones, four different shooters. This time, Sony Xperia X Performance is put against the iPhone 6s, Samsung Galaxy S7, and OnePlus 3. Let’s find out in this review and comparison if which camera phone is the best shooter this 2016.

Sony has improved the X Performance camera a lot over the Z5 by enabling faster camera startup and shutter speed. The Xperia X comes with a physical shutter key which is a rarity these days.

With the same waterproofing, the Samsung Galaxy S7 12MP sensor has the smallest resolution yet it has the widest aperture at f1.7. Unlike the Xperia, the Galaxy S7 shoots 4K video and paired with OIS.

OnePlus 3’s 16MP sensor bundled with the OIS and 4K video recording sits between the group. Its sensor is proven and used by last year’s flagship phones. But nevertheless, let’s see how it fare with its peers on higher price range.

Apple’s 12MP iSight camera on iPhone 6s does not bring any breakthrough features but it’s been established as a fast and reliable shooter.

Now on the actual test, we used the Canon 70D DSLR for color reference. Meanwhile, all shooters are set to automatic HDR mode.

We’ll be running a poll for you to vote for the best shooter which can be found on the top right. Also, let’s know which is the best camera for you in the comment section.

The first image shows a pretty sunny and some bits of cloud condition. In colors, the Galaxy S7’s warmer white balance is the closest followed by the iPhone 6s and OnePlus 3. In sharpness and detail, the Xperia X Performance trumps all cameras. If you look closely, you would still notice the carvings on the posts. The OnePlus 3 lags behind the X Performance with its yellow hue overcast shot and then by the Galaxy S7’s more contrasty photo. The iPhone 6s shot shows over sharpen details.

The X Performance has also the widest angle which means you can fit more subject but of course in exchange of losing some details in the corners.

In the next image, the Xperia X Performance nails the color here and resembles neutral white balance as to the 70D SLR. The Galaxy S7 again is more consistent in warmer hue and OnePlus 3 on a yellowish tint. The iPhone came 2nd behind the X with its a little cooler but decent shot.

In terms of resolved details, X Performance again trumps all contenders with its sharper and more detailed shot. Coming behind is the Galaxy S7 with its great dynamic range handling and contrast level.

In Image 3, the iPhone 6s has the closest color reproduction as the Canon 70D followed by the Galaxy S7.

With closer inspection, OnePlus 3 outperforms the rest with its better detail preservation and sharpness control. The aberrations on Galaxy S7 is more apparent, however. This shot shows the X Performance struggles and reduces the effectivity of its 23MP sensor in low lit areas but able to maintain a bright and well-exposed shot.

Now going to low light or night, the X Performance beats almost all in colors and brightness. The saturated color on Galaxy S7 is proven to be consistent all throughout. While the OnePlus 3 produces more neutral colors but a little pale or less vivid. The iPhone 6s cannot cope up with the other shooters during night, losing a great amount of sharpness and color reproduction.

In noise control, the Galaxy S7’s wide aperture lens helps a lot in reducing unwanted noise which is followed by the X Performance.

For detail handling, the Galaxy S7 has maintained the level of resolved details. OnePlus 3 should have been the best in detail, but the poor noise control makes the low light images unpleasant.

Both iPhone and Galaxy pack 5MP selfie snappers while OnePlus 3 packs an 8MP sensor and the Xperia X Performance with the highest resolution at 13MP.

In colors, the iPhone 6s has the most naturalistic selfie images, however, it has the narrowest lens angle too fitting only almost half of the subject compared to the wide angle of Galaxy S7 and X Performance.

The toning control on iPhone 6s and OnePlus 3 is mild while the Galaxy S7 has the most aggressive skin beautification. You can only reduce it by setting it manually to lower lever from the menu.

The extra megapixels on the front-facing camera of the Xperia X Performance enables more detailed images, which is great for fingerprints and probably for quick editing.

Again, only the X Performance shoots at 1080p while the rest are on 4K, which is still pretty standard in most TVs today. Also, this can be easily added through a software update in the future.

It’s the OnePlus 3 and iPhone 6 are more consistent in colors while both X Performance and Galaxy S7 show really good stabilization and focusing speed.

In night shooting, only the X Performance has the most pleasing colors, though the bluish tint is more apparent in darker areas. The Galaxy S7’s video has crisp details and least noise but it lacks natural colors. 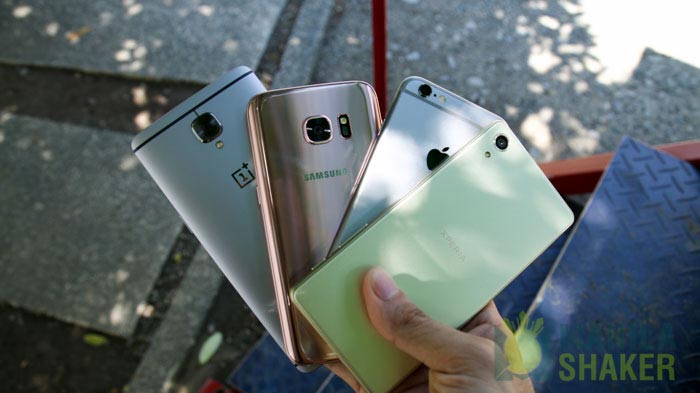 This review just proved that the Sony Xperia X Performance and Samsung Galaxy S7 are still superior and two of best shooters today. Mainly the former did a pretty job in daylight while the latter is the solid performer in low light. The OnePlus 3 is a decent camera for its price and close to the dated iPhone 6s camera.

We will leave the decision to you by letting us know which camera do you thinks is the best in this test by voting in the poll and commenting down below.