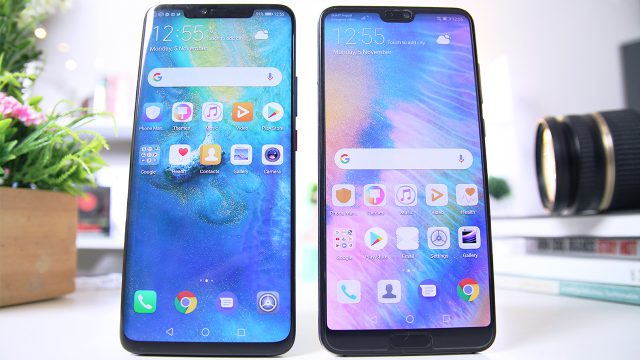 Huawei released two sets of flagship handsets this 2018 – the P20 series and the Mate 20 series. Now, maybe you’re wondering what are the similarities and differences between the two handsets – differences when it comes to camera results, gaming performance, battery, and more. Here’s our comparison of the latest Mate 20 Pro and the P20 Pro.

Watch the Ultimate Comparison video down below 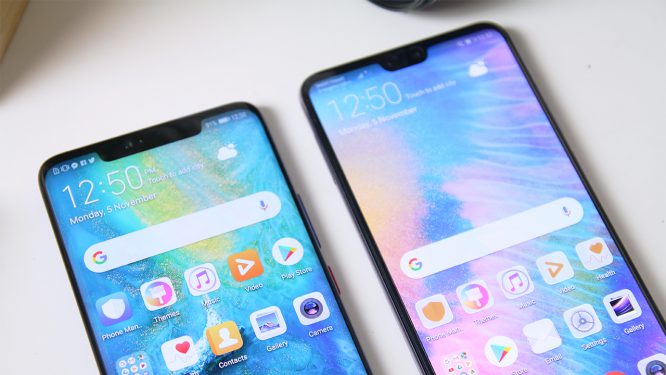 The new Huawei Mate 20 Pro packs a 6.39-inch curved AMOLED display with 1440 x 3120-pixel screen resolution and amazing 538 PPI density whereas the Huawei P20 Pro sports a 6.1-inch with a resolution of 1080 x 2244 pixels and has an 18.5:9 aspect ratio. As you can instantly notice, one of the big difference between these two Huawei handsets, design-wise: is the Mate 20 Pro’s stunning curved design.

The curved display isn’t technically new, though since we’ve already seen tons of them from Samsung, but the curved design really made the Mate 20 Pro look and feel like the top flagship in town. Looking at the notch, it’s a little bulkier than the P20 Pro’s.

As expected from a Huawei smartphone with a notched display, if you’re not a big fan of it or maybe you’re easily irritated by it, there’s an option to get rid of the notch, just head to settings.

With the two Huawei smartphones on my hands, it’s noticeable that the Mate 20 Pro offers a brighter display with both handsets at maximum brightness level. Also, the P20 Pro’s screen leaned on to a more warmer tone at default settings. There’s an option on the settings so you can tweak the screen tone to your liking. Nevertheless, both handsets provide great viewing experience, accurate color representation, and sharp details. 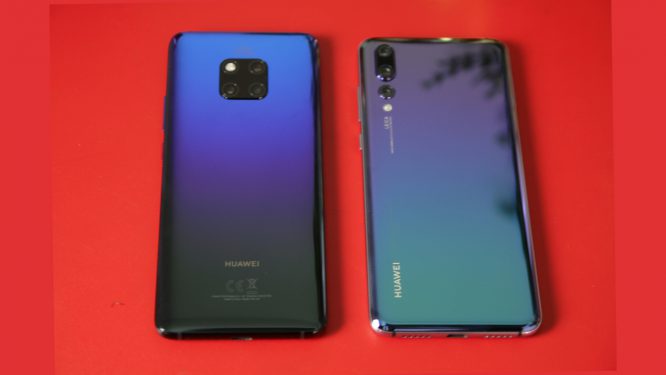 Both Huawei Mate 20 Pro and P20 Pro that we have posses similar color gradient combination, though the Mate 20 Pro’s rear gradient design has stronger colors than the lighter gradient shade on the P20 Pro. Regardless of the shade differences, both glass backs still scream “shine” that the rear of these handsets can even be used as mirrors.

Camera placement also varies. From the vertically aligned triple camera setup of the P20 Pro, the Mate 20 Pro’s cameras are placed in a square form together with its LED Flash. Personally, I don’t like how Huawei Placed the cameras on the new Mate. It might take time for some people like me to get used to it.

Flipping the two devices, aside from the fact that Huawei changed the size of the notch on the new Mate, the chin is bigger on the P20 Pro compared to the latter.

The Huawei P20 Pro received a lot of hype for its triple AI Leica lenses that are capable of shooting clear images even with the zoom set at 10. Now, everything that we all love from the P20 Pro’s cameras are also present on the new Mate but with an ultra-wide zoom added. 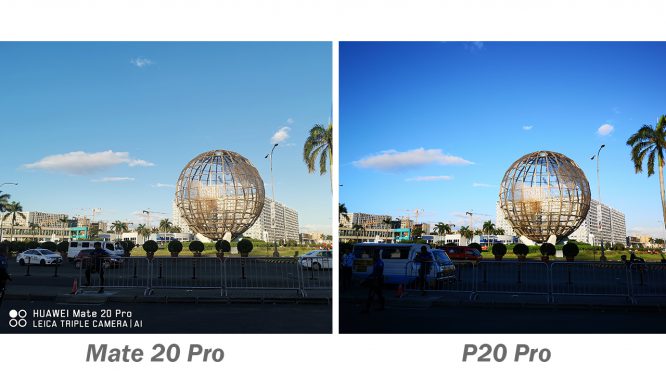 The Master AI feature of both Huawei smartphones were turned on when we took these shots and both handsets were able to recognize the scenery as “sky”. Looking at the photos, the shot taken using the P20 Pro has more vibrant colors than the Mate 20’s. The AI feature instantly post-process the photo and made the sky bluer than it already is. 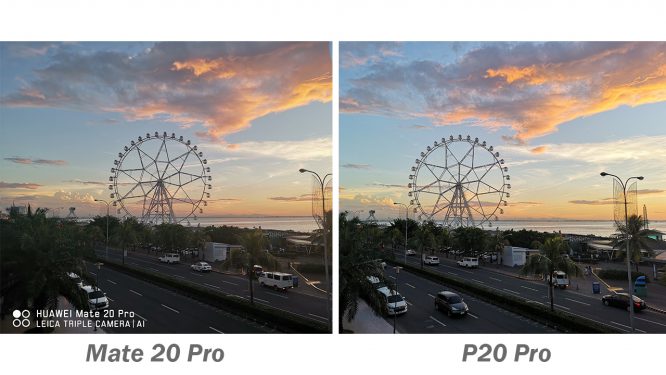 Both smartphones recognized this scenery as “Sunset or Sunrise” and automatically enhanced the orange shades on the photos. Colors are presented well and details are sharp on both.

From the previous photos, we zoomed in at 10x and as you can see, these Huawei handsets are really extraordinary when it comes to their hybrid zoom. Both shots are sharp, color accurate, and no noise/grains are visible. 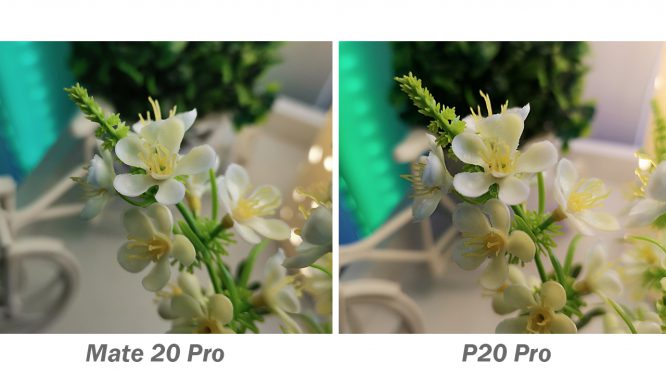 Of course, we have to test the portrait feature as well. Both handsets are slightly at par when it comes to this feature. If you look closely, the bokeh on the Mate 20 Pro shot is clearer than the P20 Pro’s. Nevertheless, both can take superb portrait shots.

Thanks to Huawei’s Leica lenses, both devices can take amazing night shots without the need of post-processing. What do you think?

The Huawei Mate 20 Pro and P20 Pro didn’t just give amazing rear shots but selfies as well. The colors on both selfies are vibrant but still managed to look natural. The bokeh effect doesn’t look artificial in any way as well. The beauty mode was turned on when we took these selfies and the beautification didn’t make the subject’s face look weird. 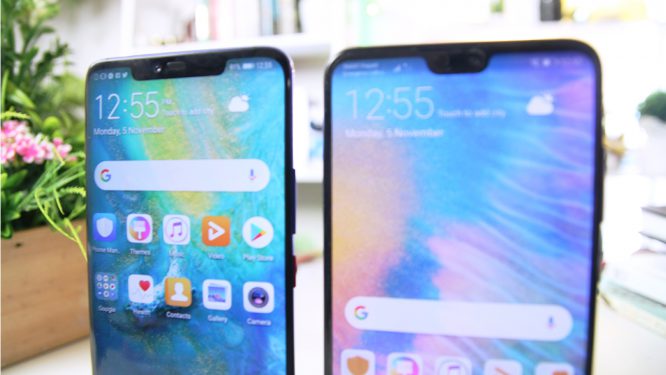 The Huawei Mate 20 Pro carries the company’s latest HiSilicon Kirin 980 chipset, which is said to be more powerful than any other 10nm chipsets. Along the new processor, there’s Mali-G76 MP10 GPU and this handset runs on an EMUI OS based on Android 9.0 Pie out of the box. Furthermore, the EMUI 9 supports GPU Turbo 2.0. Meanwhile, the P20 Pro is powered by HiSilicon Kirin 970 that was released last year alongside the Mate 10 series.  It runs on Android 8.0 Oreo out of the box but will soon receive an EMUI 9 update.

Media playbacks are enjoyable on these handsets for their color accuracy, sharp details, and large displays. The viewing experience on the Mate 20 Pro is greater though because of its curved display.

And of course, we have to test how these flagship smartphones can play graphically heavy games. Upon testing, both handsets are great for gaming, no lags of some sort were encountered while playing Asphalt 9 and PUBG, Rules of Survival, and more heavy games even at max settings. Loading in-game is a bit faster on the Mate 20 Pro and it’s because of the faster and newer chipset. Nevertheless, both are great for heavy mobile gaming.

The Huawei Mate 20 Pro packs a large 4,200 mAh battery and enjoys Huawei’s 40W SuperCharge. We were surprised by how fast this handset charges. From 10% battery, in a matter of 14 minutes, we already have 40% of battery juice. It took only less than an hour to fully charged the battery. The P20 Pro, on the other hand, also supports SuperCharge and is fueled by a 4,000 mAh battery, and according to our test, we got a full battery from 20% in 55 minutes. The Mate 20 Pro clearly has faster charging time than the latter.

Going to its battery life endurance, both the Huawei Mate 20 Pro and the P20 Pro can last around two days of full web browsing, medium media playback, and light gaming, but the Mate 20 Pro with a slightly longer battery life due of its bigger battery pack.

Jumping to the audio department, this is where Huawei is a bit lacking. Both the Huawei Mate 20 Pro and P20 Pro produces decent quality even at maximum level, however, the Mate and P’s stereo speakers aren’t the loudest in town. I mean, an iPhone 7 that was bought years ago still has louder audio than these 2018 smartphones.