Despite the trade ban that the US imposed against China, Huawei, along with OPPO, Realme, Xiaomi, and Vivo, dominated the global market share in the 2nd quarter of 2019. In fact, the combined shipments of these Chinese manufacturers reached 42% — the highest-ever recorded by Chinese OEMs. To sum up the data gathered by Counter Point Research, here are some major takeaways. 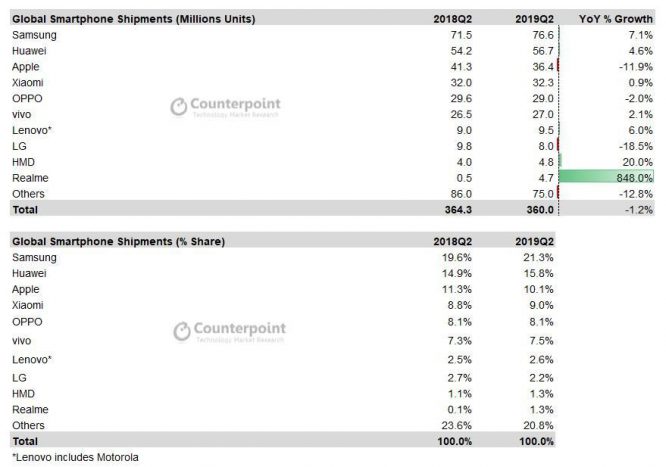 Realme and OPPO have the same parent company, BBK Electronics. However, the former brand recently started selling smartphones last year. From Q2 of 2018 to Q2 of 2019, Realme recorded an incredible 848% YoY Growth in global smartphone shipments. Its first batch of devices led by Realme C1 collected 500,000 shipments. Thanks to the aggressive prices of its budget smartphones, led by Realme 3 Pro, the shipment number jumped to 4.7 million units.

Realme’s one-year effort paid off big time as it’s now situated as the top 10 global smartphone provider. It’s said to be “one of the fastest ramp-ups” on the global market. The company saw very strong performance in India, putting itself within the top 5 brands for the third consecutive quarter. It’s going to be interesting how the company will respond as it enters its second year.

Huawei’s Domestic Growth Softened The Blow From US

As for Huawei, the company didn’t felt the effects of the trade ban as it recorded a 4.6 YoY growth. It was able to ship 56.7 million units this 2nd quarter. It even holds 15.8% of the market share, just right behind Samsung’s 21.3%. However, the full effect of the trade ban won’t be felt until the 3rd quarter. While overseas shipment is expected to drastically dwindle down, domestic shipment is expected to recover some of the losing shares. The company is expecting its shipments to continue to go down due to the overall decline of the global market. However, it’s confident that 5G will turn things around.

Apart from LG that saw the biggest smartphone shipment decline at 18.5%, Apple comes second as it recorded -11.9%. Its shipments went from 41.3 million to only 36.4 million units. However, it’s still the third-largest shipper in the world. According to the research, iPhones sales trends are improving despite the decline. Partly because of Apple’s buyback programs and other marketing strategies.

The number one smartphone brand, in terms of shipment, is Samsung. It covers 21.3% of the global market, equating to 76.6 million units shipped. It’s a positive record from 19.6% and 71.5 million, respectively. This proves that the new Galaxy A series and the revamped Galaxy S10 series are effective.

Xiaomi, OPPO, and Vivo are positioned 4th, 5th, and 6th, respectively. Chinese OEMs continue to dominate the global market due to aggressive pricing and multi-channel presence. More than that, these companies are striking the needs of the consumers as well as preferences making them easier to spot by new consumers.