The Sony Xperia Z3+ or Z4 (in Japan) is finally released to the market, few months late from the typical Sony Z-series line-up cycle. By looking at the papers, the Z3+ is only a marginal upgrade from the Xperia Z3 with its bumped up chipset, slimmer profile, and improved selfie camera. The rest remained intact in the exception of the battery life which is down from 3100mAh to 2930mAh.

There is only minor changes in the design of the waterproof Xperia Z3+. Sony removed the docking port from the left and they transferred the SIM and SD card port to left. The microUSB is now placed at the bottom besides the lanyard eye-lit.

Sony is lagging in the display race against its competition like Samsung and LG. Sony failed to deliver a higher resolution display on the Xperia Z3+ and instead they sticked with the FHD IPS LCD. Still powered by X-reality, Bravia Engine though.

In terms of color and quality we noticed very little change at all. The tone and brightness is a notch better over the Xperia Z3. The saturation and readability are visibly the same.

Perhaps the only change in the camera department is newer algorithms. Xperia Z3+ takes more accurate images. Colors are nearer to real life and it avoids over and under exposed images we saw from the Xperia Z3.

The same with the video category, exposure handling are better with retained audio pick-up for the microphone.

Sony improved the selfie camera from 2MP to 5MP. Skype-ing and taking selfie pictures are now better, of course.

Camera interface and software features have not improved. Manual settings are still the same with HDR limited to 8MP resolution which is inferior to the Auto HDR and manual controls of LG G4 and Galaxy S6 that offer.

The new Snapdragon 810 octacore chip on the Xperia Z3+ is a step-up from the quadcore Snapdragon 801. Sony paired the chip with 3GB RAM and 32GB storage.

In our benchmark tests, the Snapdragon 810 garnered mixed results. It was higher in AnTuTu, but it is lower in Basemark OS against its predecessor. 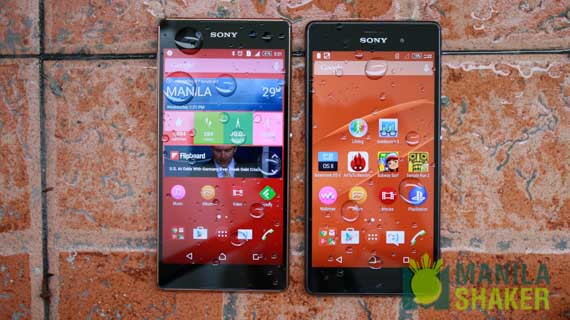 Boot up speed is slower, but handling actual tasks like running games is noticeably faster.

Overall experience with the Xperia Z3+ is smooth and fluid. However, there were occasions some running apps crashed, fortunately, those didn’t produce lags while browsing the device.

We only experienced the Snapdragon 810 over-heating issue in the first week. We issue was resolved when we updated the software.

The placement of the stereo speakers are now at the far edge of the front glass. The grills are also thinner which are hard to identify without a closer inspection.

Performance of the speaker is the same, we noticed a few drops in power but it is negligible.

Despite the trim down battery capacity, our Xperia Z3+ still lasted up to two days of use while connected to the internet. During the duration we auto-sync four email accounts, Feedly, weather, Facebook, whole day of SMS and few minutes of voice calls. That doesn’t seem like a huge leap in battery life, but it clearly makes a substantial difference.

Users will be tasting Android 5.0 Lollipop out-of-the box. The UI in Xperia Z3+ is clean and flat, and yet still flexible for customizations. Overall, the updated Xperia Z3 will have the same software experience as with the Xperia Z3+.

Verdict: Upgrade or not?

All things said, I feel that the Xperia Z3+ is a phenomenal device with superb design and build. It is one of the very few Android smartphones providing such premium feeling in terms of software and hardware experience. And as a long time Lumia 1020 user, I would clearly not hesitate to buy and upgrade to the Xperia Z3+ anytime. But if you’re an Xperia Z3 or Z2 users, we think that you better wait for the Xperia Z5 (or whatever the new Z-series flagship will be called).