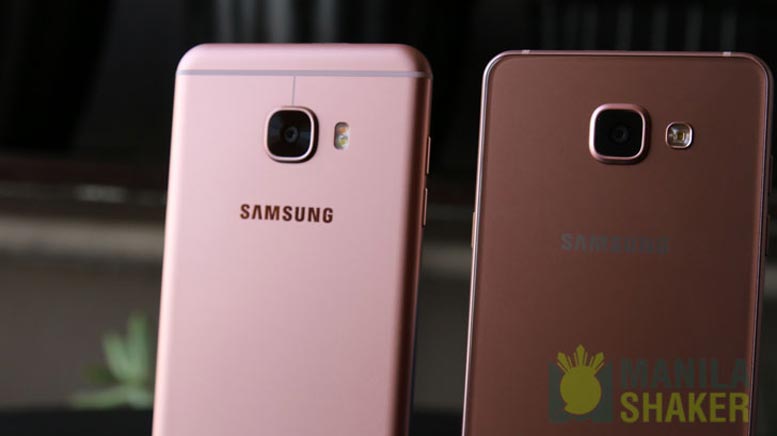 The Samsung Galaxy C5 is a new mid-range Android 6.0 Marshmallow smartphone sharing some specs similarities with the Galaxy A and J series 6. With a close price to the Galaxy A5 2016, which phone does better in camera, benchmark, battery, and overall performance? Let’s find out in our full review and ultimate comparison.

The Samsung Galaxy C5 is wrapped in metal and resembles an iPhone 6s and HTC One. The glass on the front is curved similar to both back and front of Galaxy A5 while sides are more rounded on the former.

On the home button is a fingerprint scanner that works fast and accurate as to each other while sides have similar tactile and clicky buttons. The addition of LED notification is also new to the Galaxy C5 which was previously reserved for Galaxy S line up.

The same hybrid dual nano SIM or micro SD card tray is present and accessible thru an ejector pin. You get to decide for a 2nd SIM or for a memory card.

In terms of handling, both felt good in the hands with Galaxy C5 having thinner form.

Available in rose gold or pink, silver, gray, and gold, the Galaxy C5 offers aluminum in style. The Galaxy A5, on the other hand, is uniquely more premium and solid. In design, we call it a tie.

With 5.2-inches Full HD Super AMOLED panels, quality is very close to really bright and crisp output even outdoors. Unfortunately only the Galaxy A5 has Gorilla Glass 4 proofing while Galaxy C5 is stuck with unknown screen protection. Nevertheless, you cannot go wrong with any panels.

At the back of the Galaxy C5 is a 16MP f1.9 main camera similar to the Galaxy A9 Pro, the Galaxy A5 2016 features a 13MP f1.9 sensor, which is technically smaller in resolution.

In terms of sharpness, the C5 has an edge but that’s not visible unless you will go pixel peeping. The colors are close and a bit oversaturated yet acceptably pleasing in the eyes. It’s in the night shooting where the Galaxy A5 edges out the C5 in exposure level and overall output, thanks to the OIS (optical image stabilization).

Both selfie cameras took bland yet bright photos. The details on Galaxy C5 is a bit sharper due to more megapixels, but it does not make any visible advantage in the night.

With 1080p max video resolution, the still image quality translates into the video shooting, again with A5 having OIS.

The Snapdragon 617, 32GB storage, and 4GB RAM are each a step up from the SD615, 16GB internal, and 2GB RAM of the Galaxy A5 2016 respectively. The speed difference is not that drastic both in actual speed test and in our Antutu benchmark ranking.

One thing worth noticing is that both phones cannot smoothly handle playing NBA 2K16 game with high graphic settings. You’ll need to set the graphics in low mode for convenient playing.

The biggest let down to the Galaxy C5 is the battery life, it only sports 2600mAh of juice whereas the Galaxy A5 2016 has 2900mAh. This difference translates to lower screen on time at 3 hours compared to 5 hours maximum of the latter.

Charging time is really fast on both using the Adaptive Fast charger.

There’re no special audio features inside like a high res audio upscaling in each device. Speaker output is averagely tie in loudness and clarity.

So which phone is better? 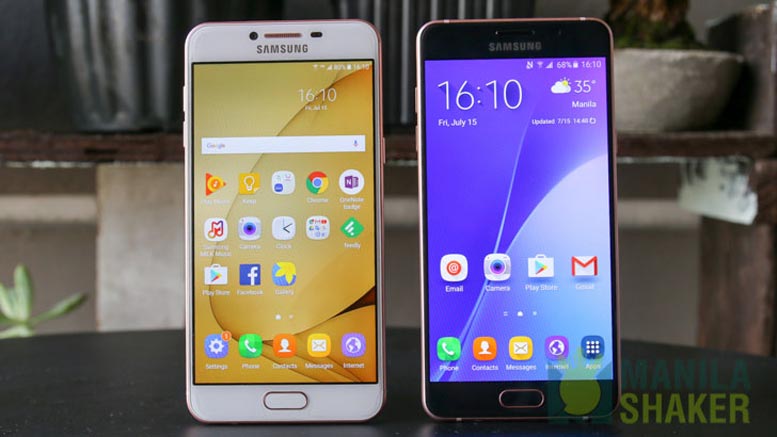 The slightly faster hardware and bigger storage are the biggest advantages of the Galaxy C5 over the Galaxy A5 2016 while most areas are noticeably the same in experience. The Galaxy C5 makes a worthy upgrade if you’re coming from an old device, but a relatively close option between the Galaxy A5 2016. But overall it is just a matter of preference.