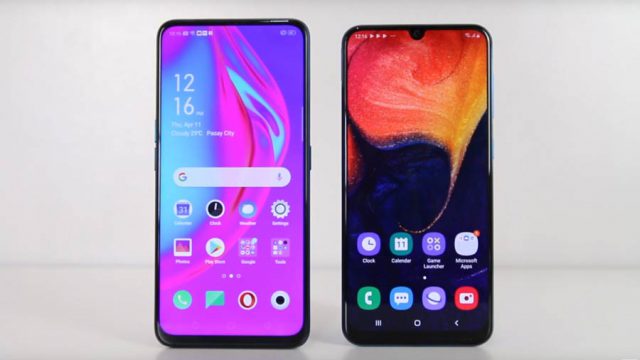 Samsung Galaxy A50 vs OPPO F11 Pro: Which is the real deal in 2019 midrange smartphones?

Both companies have a different take on the smartphone industry. OPPO focuses on smartphone photography (48MP camera) and premium features like an all-screen display and pop-up selfie while Samsung boasts a large typical setup.

In the same month, Samsung launched its newest midrange Samsung Galaxy A50 just a bit ahead of OPPO F11 Pro. Almost perfect but these devices have their strengths and weaknesses. And lately, midrange competition has been very tough and it’s getting serious, but which is better?

It’s pretty obvious that both of these devices have the premium take on its design language.

When it comes to build, OPPO feels more solid since its edges are metallic-like while Samsung Galaxy A50 is made entirely of polycarbonate or higher-grade of plastic body making OPPO a bit heavier than the latter.

Overall, the more premium feel of OPPO F11 Pro is surprising and we can easily say it is the winner on this round.

Both devices have a 1080p Full HD+ display resolution. Samsung Galaxy A50 uses a Super AMOLED screen while OPPO F11 Pro uses more accurate IPS LCD. AMOLED screens are known for deeper blacks and power-efficient but their output seems to be oversaturated compared to the true colors of LCD.

Noticeably, the notch-free screen of OPPO F11 Pro is better in watching videos as it offers no distractions compared to the notch on Galaxy A50. The Oppo F11 Pro uses Gorilla Glass 5 which is proven for better scratch-resistance capability and strength.

So it really depends on your preference in terms of display choice, but given the OPPO F11 Pro has no notch, it may be a good deal for some users. (It’s a tie on this round.)

One of the most anticipated features of every smartphone user is the camera.

Despite being classified as a midrange device, Samsung Galaxy A50 has triple-rear cameras consisting of 25MP primary, 8MP ultra-wide, and 5MP depth sensor while OPPO F11 Pro has a dual-rear camera system but has a bigger primary sensor of 48MP and 5MP depth sensor for portrait shots. While in front, Samsung Galaxy A50 has a 25MP shooter capable of AI features. OPPO F11 Pro, on the other hand, has a motorized 16MP front-facing camera.

Using rear cameras, OPPO F11 Pro has an advantage on top of Samsung Galaxy A50. Color reproduction is almost accurate, same as the saturation and contrast. When it comes to selfies, both devices struggle to give accurate skin tone and details.

OPPO 11 Pro has an excellent saturation that looks natural

Galaxy A50 has better bokeh effects but skin color is softened too much.

Colors are accurate and the details are still obvious.

The image looks brighter but the details are washed out.

When it comes to video shooting, unfortunately, both phones are not capable of 4K videos. But Samsung Galaxy A50 has better electronic image stabilization.

In light to medium tasks and gaming like PUBG, Samsung Galaxy A50 slightly steps up over the F11 Pro. On the other hand, day to day use feels smooth and fast on both hardware. It just happens that the Galaxy A50 has slightly higher benchmark scores.

In Geekbench, on the other hand, Samsung Galaxy A50 has a better score:

Both phones have a whopping 4000mAh battery capacity with the Samsung Galaxy A50 having a small advantage in terms of CPU efficiency, thanks to the 10nm chipset.

During real-world tests, however, the 4000 mAh of Oppo F11 Pro could produce almost the same battery life endurance as to the Galaxy A50.

But when it comes to battery charging, OPPO F11 Pro charges faster despite using micro-USB port since it has an advanced Super VOOC Ultra-Fast Charging Technology.

We run our battery test on both devices and it shows that OPPO F11 Pro wins:

Both devices are impressive and it is proven in our different real-world tests. But only one has to win the title of being a real midrange contender— and that will be OPPO F11 Pro.

With its premium design, eye-catching display, impressive camera, and overall performance, OPPO F11 Pro is worth your bucks. The only downer is the use of micro-USB port.