Camera is the name of the game for our latest phone-off. Which of our contenders will do it for you?

This is the ultimate comparison between the Infinix Zero 4 vs the OPPO F1s (upgraded).

The recently released Zero 4 carries that OnePlus 3 look and feel from the build down to the antenna lines.

The clean metal matte finish at the back is combined with plastic for the top and bottom portion – allowing for a better signal reception.

Also recently released, is the upgraded version of the F1S.

No size or build changes can be seen on the iPhone-esque build of the phone from last year’s model.

Stark differences from either contenders include the rear mounted fingerprint scanner for the Zero 4 compared to the home-button-embeded version for the F1s.

The F1s is a lot curvier compared to the boxy feel of the Zero 4.

The Infinix feels heavier if by a bit and a lot grippier compared to the slippery version of the F1s with the rounded frames.

This category will eventually come down to user preference so we’re letting you decide on this one. For us, it’s a tie.

Both handsets are coming in with a 5.5 inch IPS LCD display with resolution being the only difference.

Images will be a mile better and crispier on the Zero 4 with 1080p resolution way over the dated 720p for the F1s.

The Zero 4’s display came out brighter too even under direct sunlight when beside the F1s.

The Zero 4 wins this one.

Heading into the battle of better camera, The Infinix Zero 4 will technically be better at 16MP over the 13MP for the F1s on paper.

Solar assisted shot favor the F1s with better color and detail handling overall compared to the cooler and blurrier version for the Zero 4.

It was pretty close for indoor shooting with natural lighting with the F1s gaining a slight lead seen here.

F1s shoots its way through the night time with sharper details and pale colors compared to the blurry version done by the Zero 4.

Both devices can record up to 1080p but the Zero 4 will be assisted with Optical Image Stabilization. Smooth playback went to the hands of the Zero 4 but struggled in keeping focus while the F1s garnered a sharper rendition comparing.

Staying true to its ‘expert selfie’ tag, the 16MP selfie sensor of the F1s created a natural looking photo compared to the pale version of the 8MP snapper found on the Zero4. 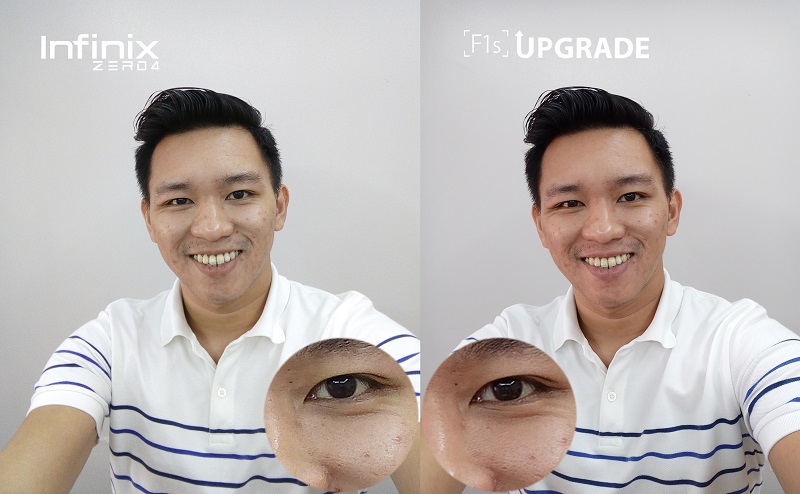 OPPO F1s wins this one.

A MediaTek provide processor powers both devices with a 6750 clocked at 1.5Ghz for the F1s and 6753 at 1.3Ghz for the Zero 4. The upgraded F1s will have 4GB of RAM, carrying an extra 1GB advantage in the lead.

It’s important to note that the ColorOS 3.0 of the F1s is based on a dated Android 5.1 Lollipop while the Zero 4’s XOS is based on 6.0 Marshmallow.

Holding an extra RAM in favor to the F1s, the experience is smoother specially with background apps kept lying in wait.

Zero 4 is just as capable, don’t get us wrong, but performance might start to get sluggish with extended usage.

Casual gaming won’t be a problem for our contenders but playing graphic intensive games might not be that satisfying.

Nova 3 garnered better frame rates on the F1s but more demanding titles like Real Racing 3 and NBA 2K17 might prove too much for either units.

Unlocking via the fingerprint sensor was a few milliseconds faster on the F1s after pressing on the physical home button. But both units gave us 10 out of 10 perfect unlocks.

By a slight lead the win goes to the F1s.

During endurance testing, the 3000mAh of the F1s lasted longer compared to the larger 3200mAh of the Zero 4.

Both capped off at 4 hours of screen-on-time with the F1s having an extra 30mins of usage. But charging the F1s took longer with almost 2 hours and a half compared to the one hour and 30mins in favor of the Zero 4.

The Zero 4 was just slightly faster taking the win this round.

As we tested the loudspeaker, Zero 4 came a bit strong in audio intensity but F1s settled in clarity.

We also tested the microphone for each device. Voice recognition was loud and clear for both but the mic of the Zero 4 registering a higher pitch.

The F1s takes the icing on this category.

The Infinix Zero 4 is unofficially retailing for P10,990 in the gray market or $220 USD available only online. This is compared to the officially released P13,990 price tag of the OPPO F1s or $280 USD in stores nationwide.

What do you think of our contenders this round? Let us know at the comments section below.