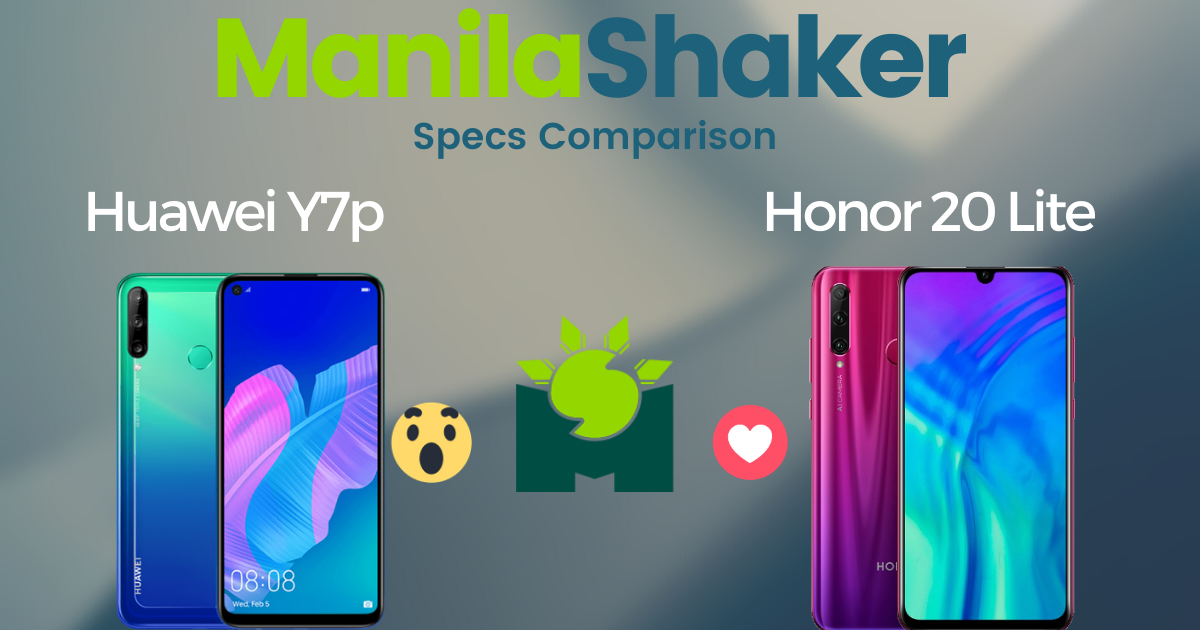 When you have P9,990 to spend, there are two Huawei phones to choose from — Honor 20 Lite or Huawei Y7p. The latter was just announced this week. Given the devices are technically from the same company, you can expect the same EMUI features. However, it’s worth noting that Y7p comes with Huawei Mobile Services out of the box instead of your typical Google services. That said, would that be enough to persuade you to opt for the other one?

Which is a better buy between the Huawei Y7p and Honor 20 Lite?

If we’re talking about the overall design and look of the two budget phones, neither is better than the other. Both are based on polycarbonate material despite having a glass-looking backing. While the aesthetic shows the “budget look” that we’ve gotten used to. The position of fingerprint scanners and cameras are even the same. But if you’re fond of lightweight phones, Honor 20 Lite only weighs 164g.

Flipping the devices over and you’ll see the main difference — Honor 20 Lite is still sporting the teardrop notch while Huawei Y7p is using a pinhole cutout on the top-left corner. I can’t really say which is better as both implementations are still obscuring content. Regardless, you will find the Honor device with better display quality due to the FHD+ resolution. Although the Huawei device is only using 720p+, there’s more real estate to occupy at 6.39″ diagonal size.

Choosing the winner between the two, we have to give it to Honor 20 Lite for obvious reasons.

READ: Samsung Galaxy A70e Is an Upcoming Small Galaxy A70

Kirin 710F vs Kirin 710 — aside from the addition of the letter, there’s not much of a difference between the two. It’s the same octa-core CPU that operates between 1.7GHz and 2.2GHz in two clusters. The same goes for the Mali-G51MP GPU. What’s worth noting here is the larger 128GB internal storage of Honor 20 Lite vs the 64GB of Huawei Y7p. The biggest difference, however, lies within the software. The new Huawei device wasn’t fortunate enough to use Google services out of the box. As a result, it’s sporting Huawei Mobile Services. While you can sideload the necessary APKs to bring Google back to life, non-techy users may need some help in this regard.

That said, we are giving this category to the Honor device one again.

Huawei Y7p has the advantage of taking crisper photo quality due to its larger sensor. Furthermore, the field-of-view is wider thus allowing more into the frame. And while 24MP doesn’t look bad on paper, it also uses the pixel-binning technique. This means the 24MP sensor outputs 6MP images. The same goes for the 48MP sensor, outputting 12MP quality. The same technique applies to the selfie camera of Honor 20 Lite, as it holds a huge lead in terms of numbers. The 32MP sensor captures more detail but still outputs 8MP images, which is technically the same as the 8MP sensor of the Huawei device.

While both are capped at 1080p video recording, the Honor device has the freedom to shoot up to 60fps. Not that it matters to an average joe, but the higher frame rate means smoother video recording and even allowing slo-mo shots if you are knowledgeable in editing.

Both budget phones are equipped with mono, south-firing speakers as well as audio jacks. We really can’t tell the difference in quality at this time, so we’re giving it a tie.

Don’t expect fast charging here as the micro USB ports of the two devices can support 10W only. Huawei Y7p, however, has the advantage of the larger battery at 4000mAh making it the winner this time.

Huawei Y7p, on the surface, looks like a good deal. While we can still forgive its 720p display, we can’t let go of the fact that you only get 64GB storage for under P10K. Even Realme 5 and Redmi Note 8‘s top models which retail for the same price tag already comes with 128GB. On top of that is the lack of Google apps and services out of the box. This is not a problem for those who’re familiar with Android’s ecosystem, but the same can’t be said for others. All these issues make Honor 20 Lite the better buy even with the smaller battery capacity.