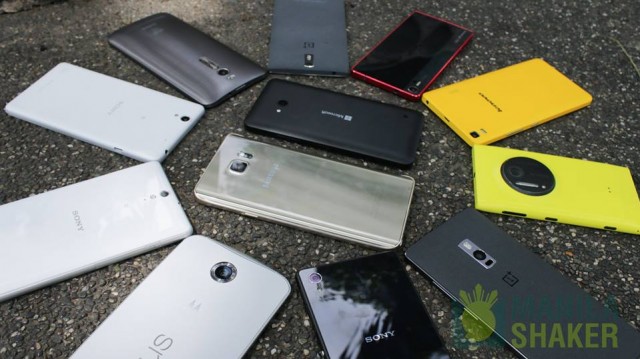 In this age of smartphones, sometimes bigger can be better, although thats not the case on this list, because were here to find out the 5 most compact, yet very effective smartphones in the market. Find out their specs, features, prices and the reasons why they’re considered to be the top, despite being relatively small.

Microsoft‘s Lumia phones are top notch to say the least, and that look doesn’t differ in Microsoft’s 5-incher the Lumia 640. The Lumia 640 LTE is actually the biggest amongst the list, though the most affordable in terms of price. Its top notch system and performance capability is surely to be something to look out. However, with the coming of the Lumia 550, the Lumia 640 is currently being threatened on its market by its own blood brother. Hopefully, this won’t be the last that’ll see the Microsoft’s budget heavy compact Lumia 640. The Lumia 640 is available at Lazada PH for Php 8,499 for the LTE variant, as of October 8, 2015.

Of course the Lumia 550 is gonna be on this list. The device that threatens to take away the 640’s market is soon to come. The Lumia 550 is yet to be launched, though it is expected to be out on December 2015 in the US. A massive jump from the 640 variants, the Lumia 550’s decent capability as a smartphone isn’t necessarily the one that put it in the list, the real reason is its Windows 10 feature, which, despite being a budget phone possesses Microsoft’s latest OS update. Something truly to be looked forward to buy Microsoft fans and budget phones fans alike. The Lumia 550 is expected to be priced at $139 or roughly Php 6.4K, converted PH price.

Sony is quite known for their compact-size smartphones, such phone is the Xperia Z3 compact. The latter sports really impressive specs and features that can even trump some of the biggest flagships in the market. the 4.6-incher showcases a great performance in display and storage capacity, with its decent 2GB of RAM in hand. The Xperia Z3 compact also has a pretty good battery longevity content of 2600mAh, which should help this little guy to last longer than most, expected. If your looking for a powerhouse phone that is portable and easy to carry, then the Sony Xperia Z3 Compact is something that you should heavily consider. The Sony Xperia Z3 Compact is avalable for Php 21,599 in Lazada PH, as of October 8, 2015.

See also: One Reason Why You Shouldn’t Buy The Sony Xperia Z3+

The Xperia Z5 Compact is the most recent take on Sony’s Z-series, with its massive arsenal in store, this 4.6-incher isn’t someone to be ignored. The Xperia Z5 compact carries out a few strong traits, such as its 23MP rear shooter and its 5.1MP selfie shooter with HDR capability. The Sony Xperia Z5 Compact is the more modernised version of the Xperia Z3 Compact, which happens to also be part of this list. It goes to show you, that this little flagships of Sony is a pretty huge deal in the smartphone industries, whether your a sony fan or not. The Sony Xperia Z5 Compact is available in Taiwan for roughly NT$ 18,900 or Php 20K, for the converted PH price.

Through this lists, we were able to determine that size doesn’t mean everything and that a devices power, lies not on its screen and size advantages, but rather its system. All devices mentioned in this list are all capable of delivering a pretty strong performance, which is expected from these compact yet powerful devices.

Please leave your comments and suggestions on the comments section below to tell us what you think, and also, if you some other list of compact smartphones in mind, we highly recommend you to share them.