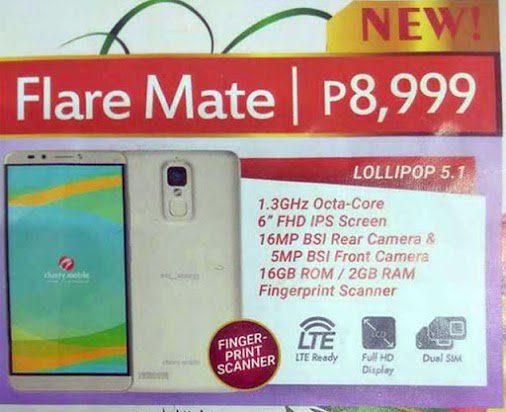 Cherry Mobile’s upcoming phone, the Flare Mate looks like someone that can subdue its pair share of competition, and so before the device actually arrives, we figured to par in up with a few mid-rangers in the market, in terms of specs, and find out whether the devices is truly as beastly as it is.

Highlights of the Cherry Mobile Flare Mate against its opponents:

We can perfectly assume that all 3 phones are highly the same in many aspects, though it can also be implied that the Flare Mate is relatively pricier than the older versions of the said device. For shooters, we might expect a similar front facing shooter from the Cherry Mobile Flare Mate and might considerably expect a larger battery capacity, since,  Cherry Mobile would likely adapt to a more larger battery capacity to maintain stability of their FHD 6-inch display. All 3 phones share a lot of likeness, such as Android versions, RAM capacities and internal storage capacities, which is understandable to say the least. Overall, the Flare Mate S has yet to be deliver more of its tricks and might still trump heavily the 2 Lenovo phones, but for now, the Fingerprint sensor of the Flare Mate is the true blue deal carrier for the Flare Mate, and truth be told, a more worthy buy than both Lenovo phones, just for that particular feature alone.

The Cherry Mobile Flare Mate has no official release date so far, however, a price of Php 8,999 has been confirmed for the upcoming Cherry phone. As for the Lenovo K3 Note and A7000 Plus, the devices are available through Lenovo stores and Online stores alike, for Php 7,979 for the K3 Note and Php 7,999 for the A7000 Plus available in Lazada PH. Please feel free to leave us your suggestions on what you think will be the strongest feat of Cherry Mobile’s upcoming 6-incher. Just hit us up on the comments section below and share your thoughts. We highly appreciate feedbacks from you guys.