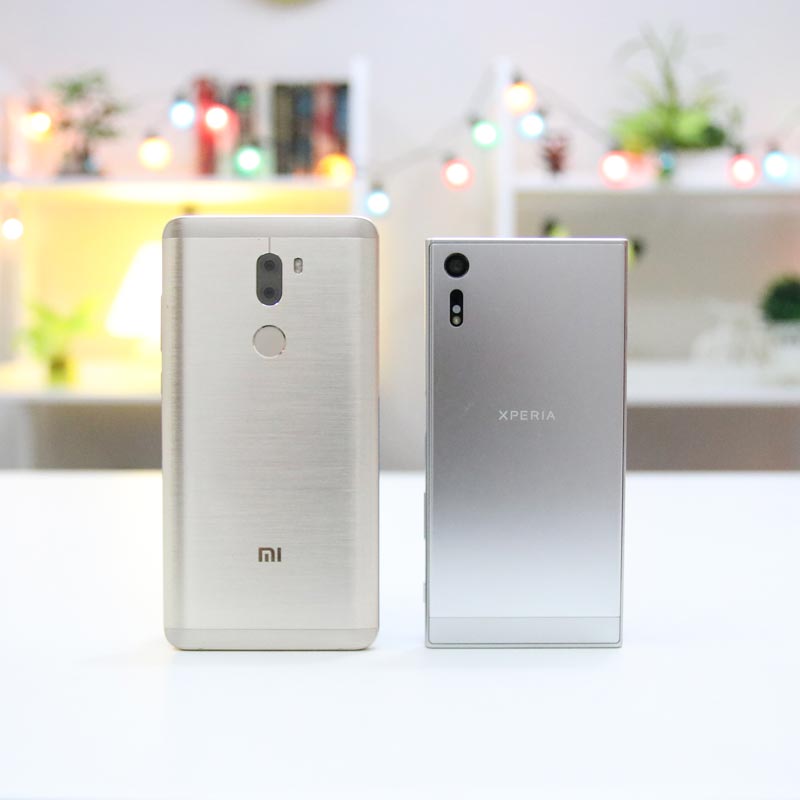 It’s the battle of the flagship phones between Sony Xperia XZ and Xiaomi Mi 5s Plus. With the Xiaomi coming in with a cheaper price tag and the latest high-end Snapdragon CPU, does it have what it takes to be a flagship killer? Let us find out in our review.

To start things off, Sony’s flagship phone is made of aluminum with the back made from ALKALEIDO material that adds depth, shine and brightness to it. It is designed with squarish exterior with rounded edges and has “loop surface” design giving a pure and clean look. Up front is where the NFC is located beside the front camera and speakers which are located at the top and bottom of the glass display. At the top, sits the headphone jack and at the bottom is the USB Type-C port. On the right side, houses the camera shutter button, volume rocker, and power button which doubles as a fingerprint scanner and the hybrid dual sim card slot on the left side. The device is also IP68 verified dust-proof and waterproof over 1.5meter and 30minutes.

Xiaomi’s flagship phone too is made of aluminum with a curved back and the antenna lines are found all around the edge of the device. The chin house the three capacitive buttons, on the right side, is the volume rocker and the power button, on the left side is the hybrid dual sim card slot and on the back is the fingerprint scanner. At the top, sits the headphone jack and at the bottom is the USB Type-C port with two speaker grills.

Both devices feel solid and can be used by one hand despite its size, you might just have to adjust with Sony’s flagship if you are reaching for the volume rocker but overall both devices look good in their own ways. It is a bit hard to choose between the two but if we are to consider the IP68 rating we have to give it to Xperia XZ.

Both devices pack an IPS LCD 1080p display but Xperia XZ’s 5.2″ screen has a higher pixel density at 424ppi compared to Mi 5s Plus’ 5.7″ screen at 386ppi due to its screen size. The former used TRILUMINOS display technology to produce a wider range of colors for richer and more vivid color. The Mi 5s Pls appears to be brighter than Xperia XZ but the latter is a more vibrant. Nevertheless, both devices produce great display and will come down to user preference.

Sony’s flagship comes with 23MP f/2.0 shooter with 1/2.3″ sensor while Xiaomi’s flagship shooter has dual 13MP f/2.0 with 1/3″ sensor. Xperia XZ’s 23MP with triple image sensing technology captures images accurately and vivid colors than Mi 5s Plus regardless if it is during daylight or night time.

Xperia XZ can record up to 1080p @ 60fps while Mi 5s Plus can record up to 4k resolution @ 30fps. On our test, we set it under 1080p 30 fps. The Xperia XZ supports 5-axis stabilization that helps in taking still photos and videos.

Antutu benchmark shows that Xperia XZ’s Snapdragon 820 beats Mi 5s Plus’ Snapdragon 821 by a slight margin but both devices perform well and there were hardly lags during the entire usage. Though when opening some apps, the Mi 5s Plus loads faster.

Both devices have dual speakers and produce clear and loud audio but Xiaomi’s flagship is louder, additionally, Sony’s flagship bass output is noticeable and supports 24-bit Hi-res audio if used with audio accessories.

For the winner of this comparison, we have to give it to Xiaomi Mi 5s Plus due to the reasons mentioned earlier but if budget is not a problem with you and you are a big fan of Sony, it won’t disappoint you as your daily driver.

What do you think of our latest comparison? Let us know in the comments section below. If you have any questions, tweet those questions @thenotyourtype.