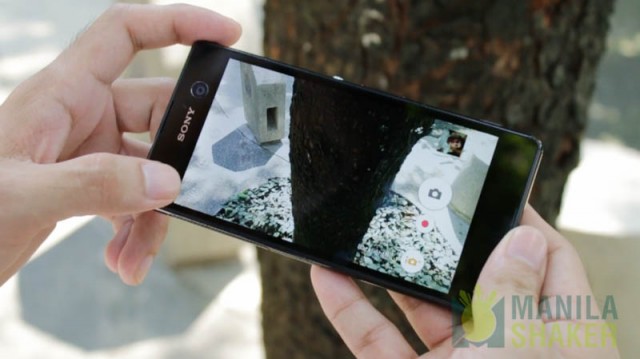 In this review, we’ll tackle the Xperia M5’s overall camera specifications, features and overall focusing performance, against four other smartphone competitors, which are carrying laser autofocus and phase detection feature. The competitors are the OnePlus 2, Asus’ Zenfone Selfie, Lenovo’s Vibe Shot and Samsung’s Galaxy Note 5. Can the Sony Xperia M5, carry itself on top, against these camera smartphone powerhouses? Lets find out.

We started things of, with OnePlus’ current leading handset, the OnePlus 2. Upon closer inspection on both devices’ outputs, we were able to determine that for video performance, the OnePlus 2 delivered over exposed shots, in comparison to the spot-on exposure that Sony Xperia M5’s output delivered. In terms of sharpness and overall focusing speed, it was seen that the Xperia M5 was miles ahead of its opponent., the OnePlus 2.

Further inspection on both devices’ output, showed that OnePlus 2’s outputs inhibits a lot of visible huntings, and the latters output, frame jumps a bit, which is a big lowdown, if you consider output accuracy, as a major factor in a camera’s performance. For the Sony Xperia M5, we were able to conclude that, the device was able to manufacture smooth focusing capability, while changing from subject to subject.

In this first challenge, Sony Xperia M5 claimed victory over its opponent, the OnePlus 2, thanks to its 21MP sensor, which solely trumps the laser autofocus feature of the OnePlus2

Another challenger enters the booth, in the form of Asus’ latest mid-ranger, the Zenfone Selfie. The Asus Zenfone Selfie packs a 13MP shooter, with laser autofocus assistance, and looks to take out, the Sony Xperia M5. Asus showed great confidence, on its PixelMaster Technology, since it was introduced through Asus’ first generation handset, so, its safe to say, that their Zenfone Selfie camera smartphone, which specializes in camera performance, won’t be an easy handset to beat.

Lenovo’s Vibe Shot and Sony’s Xperia M5 has faced each other once before, in one of our review comparison, however, the Lenovo Vibe Shot comes back to possibly exact revenge on the Xperia M5, will the Vibe Shot get its wish?

The Lenovo Vibe Shot, is currently china’s top of the line smartphone. It sports a 16MP rear shooter, which is supported by triple tone LED flash and laser autofocus feature. The Vibe Shot might be the one of the toughest contender in this challenge, in the imaging department, however, it wasn’t able to keep up, with the Xperia M5’s fast autofocus capability.

Upon closer inspection on the outputs of both device’s, frame jumping were also experienced for the Vibe Shot, which just like in OnePlus 2, played a major role in determining the winner of this challenge. In terms of still imagery, we were able to conclude that the Xperia M5 had the upper hand on the Vibe Shot, in terms of detail preservation, dynamic range and overall output exposure.

The Galaxy Note 5 is a beastly device, it showcases sophistication as well as power, so it wasn’t much of a surprise for it to be a bit par with the Xperia M5’s video and camera performance. The Galaxy Note 5 wasn’t equipped with a laser autofocus support, however, it was already an established speedy shooter, which is similar to the Xperia M5. However, via focusing speed, Xperia M5 shows supremacy over its beasty opponent, with a very minimal visible locking mechanism.

Today, we gave the Sony Xperia M5, one heck of a challenge and with that, proved that the Sony Xperia M5 delivers a powerful performance, with its ultra fast focusing speed, despite not having any laser autofocus feature.

Please leave your comments and suggestions about this challenge and if you wanna see more of these challenges, simply, hit us up on, the comments section. Feedbacks are always obliged!

Also, check out the video version of this review.