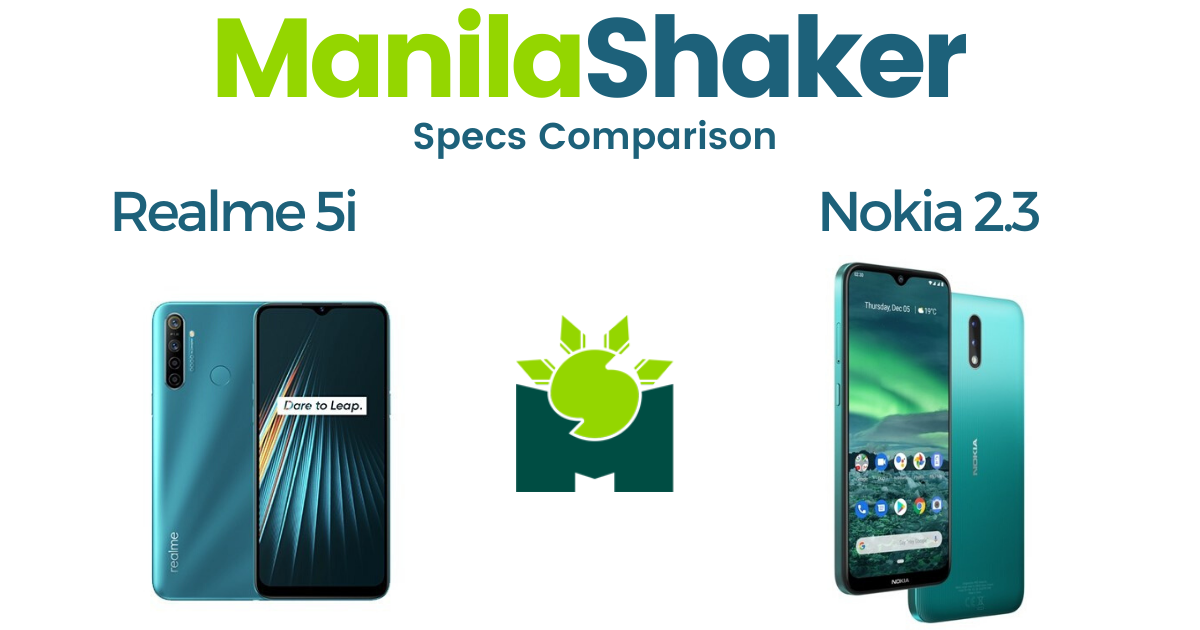 If you’re looking for a budget phone this year, two new phones were just released — Nokia 2.3 and Realme 5i. One features Android One with guaranteed up to three years of software patches while the other has everything you wish for in a mid-range device. That said, which one should you purchase?

Realme 5i and Nokia 2.3 Differences

Realme 5i and Nokia 2.3 Similarities

Which is a better buy between the Realme 5i and Nokia 2.3?

Nokia 2.3 is the lighter and thinner phone in this comparison. However, both have polycarbonate build. Realme 5i has the advantage due to its splash resistance body. But if we’re talking about aesthetic, Nokia’s entry-level phone has a 3D textured finish on the back for better grip.

Although both are using a teardrop notch on their IPS LCD, Realme is the larger screen at 6.52″ vs 6.2″ and even comes with Corning Gorilla Glass 3+ protection. Quality-wise, it’s the same 720p+ resolution display.

Expect better performance out of the Snapdragon 665 of Realme 5i. It has eight cores to boot and a decent Adreno 610 GPU. As for Nokia 2.3, its innards are made to accommodate basic tasks. The Helio A22 chipset features four cores only with PowerVR GE8320 GPU. It’s only paired with 3GB RAM and 32GB storage. However, it does come with longer software support through the Android One program. It’s guaranteed to receive three years of security update and two years of major OS upgrade. As of writing, both devices are running Android 9 Pie with scheduled Android 10 upgrade.

No matter how you slice it, Realme 5i has better camera hardware than Nokia 2.3. Aside from the main camera, it can also take ultrawide and macro shots. There’s also gyro-EIS that’s hardly found in an entry-level device. This allows for smooth video recording. Last but not least is the ability to record up to 4K @ 30fps.

Both phones are using south-firing speakers with support for the audio jack.

Both again are using micro USB to charge their batteries at 10W. However, Realme 5i is known as the battery king with its 5000mAh capacity. While Nokia 2.3 carries a common 4000mAh capacity that’s still generous by today’s standards. Do take note that charging the larger battery at the standard rate takes more time.

Nokia 2.3 is selling for P5,990 already while Realme 5i is set to arrive around P6,990 (around the original price of Realme 5). Android One is great and all but the importance of software update doesn’t mean that much if we’re talking about entry-level devices. Not because the device doesn’t benefit from it, but because cheap phones are easy to replace and upgrade from. And even if that wasn’t the case, Realme 5i still offers better value for money.

READ: Realme 5i vs Realme 5 Specs Comparison – Upgrade or Downgrade?