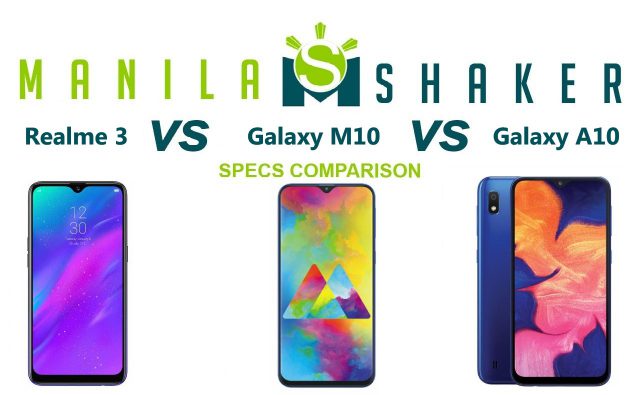 With no shortage of budget phones releasing as early as this year, picking up one only gets harder and harder from here. In early 2019, we already have three competitors gunning for the best budget phone title: Realme 3, Samsung Galaxy M10 and Galaxy A10. All with prices around Php6k, which should you get?

How Realme 3 stands out

How Samsung Galaxy M10 stands out

How Samsung Galaxy A10 stands out

Which is the right one for you?

Starting with the Samsung Galaxy A10, the performance of its Exynos 7884 comes second out of the three. It also comes with Samsung’s One UI. In terms of camera, it’s a generation behind with a single 13MP main and a 5MP selfie shooter. But at least you have a dedicated microSD slot of up to 512GB.

The Samsung Galaxy M10, on the other hand, comes with the less powerful innards such as PLS TFT panel, Android 8.1 Oreo, Exynos 7870, and a starting variant of 2GB/16GB. But it pulls ahead of the camera race with its own 13MP + 5MP main camera.

Realme 3 stands out among the three with its decent specs. It features a decent IPS LCD display complete with Corning Gorilla Glass 3. The Helio P60 chipset is the best out of the three handsets and has the ability to support up to 4GB/64GB which serves as a standard in 2019. The camera gets extra 00mph with 13MP + 2MP main and a 13MP selfie shooter. Apart from that, you get to use a rear-mounted fingerprint scanner together with a larger 4230mAh battery.

With the three budget phones estimated at Php5,990 (should it hit Philippine stores), the Realme 3 shows it’s the better buy and unbeatable at this price range.