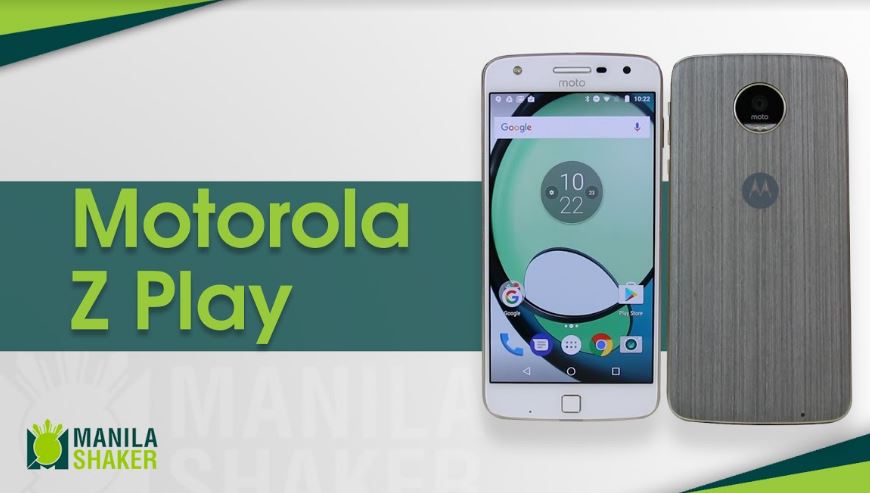 Motorola, through Lenovo, made their beloved modular flagship available to the budget conscious through a chunkier sibling. We find out if it’s enough to convince you to get into going modular.

This it the full review of the Moto Z Play.

While it’s not true modular in terms and points of how Project ARA works, it’s an attempt, nonetheless, at emulating the experience of being able to swap out parts for a thing you would want on your smartphone.

Enter the Moto Z Play. The budgeted Moto Z and Moto Z Force sibling that allows you to experience the modular aspect without breaking the bank. So to speak.

The design copies those of the Moto Z and Moto Z Force with added heft and feel amid having less aggressive specs comparing.

In exchange, the Z Play allows for a 3.5mm headphone jack -something that’s noticeably amiss on the beefier siblings.

The construction is not water resistant nor submersible like, say, the Samsung Galaxy A 2017.

Additionally, the Z Play was not made shatter-resistant or shatter-proof so better be careful with this device or have it protected with a case.

Starting from the back, our review unit came with a plastic plate that looks like wood. Removing the ‘mod’ unveils the glass backing with magnetic pins that act as ports for the Moto Mod of choice.

Up top sits the large camera hump with dual tone LED flash as well as the sensors.

The front and back glass panels are held together by a metal frame. The construction rounds out at the corners making a flat pebble shape.

The right panel houses the power button below the volume rocker.

The top portion is where you will find the ejector tray that can house 2 nano SIM cards and a dedicated slot for your SD card back-to-back.

The bottom portion holds the USB type C port and and the headphone jack.

The front panel is being occupied mostly by the 5.5 inch diaplay – which we will get to in a bit.

The most noticeable will be the rounded square button at the chin that functions only as a finger scanner. I repeat only as a fingerprint scanner. NOT as a home button. You have the on-screen navigation keys for that.

Everything else is a standard affair with the selfie camera, LED notification light, the ambient light and proximity sensors, and the earpiece that doubles as a front firing speaker. The only difference is that the Moto Z Play features a front facing flash for selfies taken in low light. Nifty.

Displaying your content in all its glory will be a 5.5 inch Super AMOLED at 1080p with a total of 401ppi. This is in contrast to 1440p or QHD for the Moto Z and Moto Z Force.

The difference is hardly noticeable to the untrained eye unless you get to zoom in on the screen itself.

Similar to any and all displays sporting Super AMOLED, you can expect bright, crisp and vivid output with saturated colors in contrast to blacks which show as deep blacks.

Shots taken on a sunny day were handled well providing us sharp images with vibrant colors.

Using the camera indoors is pretty much the same provided you have a ample lighting.

Close-up shots were also pretty impressive being able to focus on the subject properly.

It takes a while for the camera to make heads or tails of the image in lowlight scenarios as all cameras struggle. And focusing started to become a problem as the sensor couldn’t keep track of what to register on.

Images taken in low-light were smooth but colors were pale. The built in flash helps in this department if by a little.

Recording a video with the Z Play can take up to 4K resolution @ 30fps but Optical Image Stabilization is not present.

Regardless of the resolution, video details were great and colors appear livelier and video processing is a bit on the smoother side.

Taking selfies with the 5MP f/2.2 snapper was pretty impressive especially on locations with natural lighting.

Moto boasts here the 85-wide angle selfie camera that allows more space in compared to the claustrophobic version on the iPhone, for example.

A reasonable Qualcomm Snapdragon 625 chipset computes for the Z Play in tandem with 3GB of RAM.

Despite meager specs, the experience is always buttery smooth, Specially worth noting is the absence of bloat of any sort. Motorola promised near-stock experience and they delivered.

Casual apps used on a daily basis whizzes by without a hitch for the Z Play. Even when back-logged with tasks, it manages to perform under duress.

There were some hiccups when queueing up more demanding apps and games but it doesn’t get to a point that it’s unplayable.

The fingerprint sensor gets tricky here as the hold to lock feature hinders snappy response rates when unlocking the phone.

Don’t get us wrong, the read out is fairly accurate at 95% of the time. However, the system waits for you to hold your finger on the sensor for it to lock resulting in some delay.

The reason behind the bulk of the Z Play lies in its battery capacity. At 3500mAh, it has a larger pack compared to the Moto Z with a meager 2600mAh.

Endurance tests got us about 36 hours of stand-by-time with a decent 5 hours of screen-on-time. But what impressed us the most was that it only took an hour and 45 minutes to fully charge the device from 0.

Perhaps the Play is Z Play now means something?

The earpiece that doubles as a front-firing speaker produced good quality audio with a touch of being tinny. Sadly, it can’t get loud enough when used in a large room or outdoors.

On to the main feature, Z Play also supports Moto Mods – allowing users to add extra battery or a mini-projector.

We currently have four Moto Mods lined up, starting with the –insta-share projector.

Moto Mods are convenient to use thanks to easy snap and swap capability.

The phone will vibrate signaling that the mod is attached and ready to use.

To use the insta-share projector, you need to press and hold the power button of the mod for about three seconds and voila! You have a mini-projector.

To attain clear projection, you have to adjust the manual focus located beside the lamp. Keystoning is also included in the mod’s settings as well as hiding notifications while using the mini projector.

The 480p projected display is impressive especially if you are looking to watch a movie with your friends, you just need a dark environment and a clean wall. We just hoped that the battery can last much longer as we were able to squeeze around 2-3 hours.

The next Mod that we have here is the Hasselblad 4116 True Zoom.

Just like the what the name says, it offers 10x optical zoom and a bright xenon flash.

We took a few photo samples using the hasselblad and boy oh boy, those photos were still crisp.

Up next is the JBL Soundboost.

As expected from JBL, The stereo audio has a strong intensity to it with a little bass mixing in. It might not be a Bluetooth speaker alternative but the quality is almost there. Moto boasts that it can last up to 10 hours of playback but we are giving it a realistic 6 hours.

And last but not the least is the Incipio OffGrid Power Pack giving you an additional 20 hours of battery life. The extra battery pack contains 2220mAh juice that can be recharged while attached to the phone.

It’s quite disappointing that it does not include any charging port as the battery pack is quite heavy and thick when attached to the phone.

Indeed the mid-range handset offered by Moto is a competitive one under its category due to its modular features. Add to it the long battery life with good camera when used in daylit environment. However, there is no future-proofing on this one.

If you are a fan of Moto mods, then you can save a few bucks when buying the Moto Z Play.

Asus Vivobook Pro 15 OLED (M3500) Review – Is It an All Rounder Midrange Notebook?